As most election officials predicted, attorneys are taking Wisconsin's election results to court as accusations of fraud and polling conflicts continue to pile up.

Thomas More Society's Amistad Project on Tuesday filed an emergency petition with the Wisconsin Supreme Court, asking it to block certification of the vote. The certification deadline is Tuesday, Dec. 1.

Attorneys say they've found over 150,000 illegal ballots — more than enough to eliminate Joe Biden's 20,000-vote lead. They also allege that roughly 10,000 Republican votes were not counted, as their absentee ballots were requested and filled in by someone else.

The petition addresses concerns that Church Militant has brought up in its post-election specials, but this petition provides numbers showing how many illegal absentee ballots were actually cast. It breaks down these numbers in this chart (page 3).

Outside of these specific numbers, Team Trump's petition (not called a lawsuit for procedural purposes) has its own objections — some corresponding with those brought forth by Thomas More Society — focusing on illegal absentee voting.

The petition alleges that tens of thousands of ballots were sent to residents who didn't apply for them, both in Milwaukee and Dane County. If true, these votes violate Wisconsin Statute §6.86(1)(ar): "The municipal clerk shall not issue an absentee ballot unless the clerk receives a written application therefor from a qualified elector of the municipality. The clerk shall retain each absentee ballot application until destruction is authorized."

As [the recount] has progressed, it has become a battlefield of its own.

Attorneys also show that municipal clerks were illegally instructed to alter incomplete ballots owing to false advice from an Oct. 18 memorandum issued by the Wisconsin Elections Commission stating that corrective action must be taken to add an address to ballots, allowing clerks to rely on anything (including personal knowledge) to correct it.

If true, this violates Wisconsin Statute §6.87(9): "If a municipal clerk receives an absentee ballot with an improperly completed certificate or with no certificate, the clerk may return the ballot to the elector ... ." The statute leaves no provisions for correcting an incomplete ballot.

Perhaps the most specific issue to Wisconsin is the issue of indefinitely confined voters. In Wisconsin, a copy of a photo ID is required to vote as per Wisconsin Act 23, but Wisconsin law leaves certain exceptions to this rule, one of which is indefinite confinement.

According to Wisconsin Statute §6.86(2)(a), indefinite confinement is when a voter cannot leave their home owing to "age, physical illness or infirmity" or those who "are disabled for an indefinite period."

This problem arose when Dane County Clerk Scott McDonell sent an email in March to municipal clerks, saying all Dane County voters could declare indefinite confinement because of the governor's COVID-related lockdown orders.

After the advice was given, the state saw a 200% increase in indefinitely confined voters coming into Election Day with nearly a quarter-million voters circumventing the state's voter ID law.

Wisconsin's Supreme Court, which would also hear the case by Thomas More Society, said McDonell's advice was legally incorrect and ordered him to comply with the letter of the statute.

Trump's petition alleges evidence of dozens — and counting — of so-called "indefinitely confined" voters posting pictures of themselves in jazz clubs, among other public places, during lockdowns. Because of this, they are requesting further investigation into these ballots, as is necessary to prevent fraud and ensure election integrity.

Recount: Its Own Battlefield

After discovering these various problems largely in Democrat-controlled cities, team Trump requested and paid for a recount in both of the state's Democratic strongholds, Milwaukee County and Dane County. It paid $3 million for this partial recount as opposed to ponying up $8 million for a statewide recount.

The recount is ongoing since Nov. 20. As it progresses, it's become a battlefield of its own.

Milwaukee County officials are still mistreating poll observers, forcing them to keep six feet away from the plexiglass windows and to wear wristbands with a poop emoji on them.

As soon as the recount request was made, Wisconsin's elections commission called a late-night emergency meeting to edit the recount manual to prevent poll observers from objecting to absentee ballots.

The measure failed after six hours of partisan argument in a 3–3 vote. The victory is credited to two courageous Republican Commissioners, Robert Spindell and Dean Knudson.

Spindell specifically demanded that plexiglass windows be installed in order to allow Trump observers to analyze ballots up close, unlike the count on election night, where GOP observers were forced to stand anywhere from 25–30 feet away from counters.

Despite Spindell's efforts, Milwaukee County officials are still mistreating poll observers, forcing them to keep six feet away from the plexiglass windows and to wear wristbands with a poop emoji on them.

Following the Milwaukee fiasco, Trump observers were accused of obstructing the count by election officials and by the Marxist media. What headlines don't say, however, is that observers objected to counting those ballots which violated Wisconsin law.

This so-called obstruction is actually the job of observers. But neither team Trump nor the Democrat counties' election officials think this will be resolved by recounting ballots. The state certification will likely be settled in a courtroom and not in ballot box.

If the court does block certification and the election problems can't be resolved in time, the Republican-dominated state legislature will be tasked with appointing its own electors to vote in the Electoral College. This may reposition Trump to win the "Badger State" on Dec. 14, when electors cast their official votes. 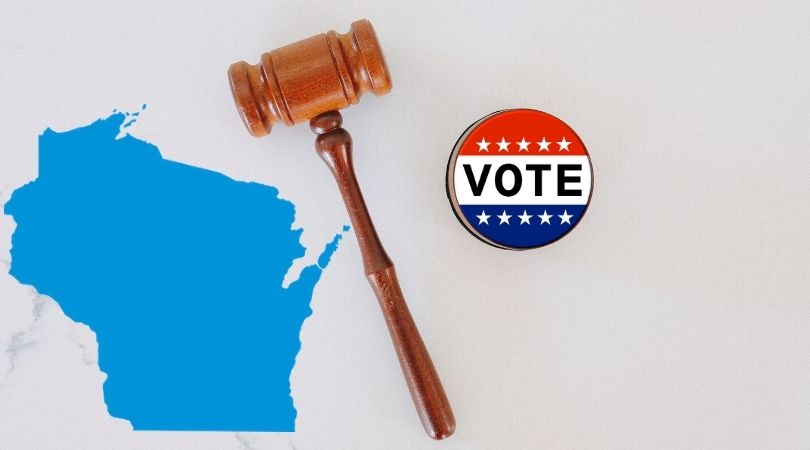