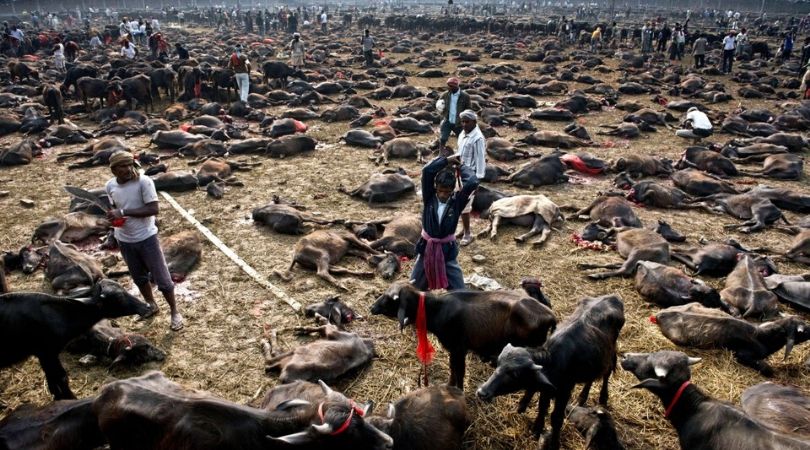 Tens of thousands of animals beheaded in alcohol-fueled slaughter

BARIYARPUR, Nepal (ChurchMilitant.com) - The largest mass-animal sacrifice in the world is now taking place in the country of Nepal, despite calls for its banning.

The Hindu Gadhimai festival, which takes place every five years in the nation's Bara district, involves a whole month of celebrations. It is highlighted by the great slaughter of buffalos, as well as goats, pigs, chickens, pigeons, ducks and rats. According to non-profit Humane Society International (HSI), these animals are decapitated with blunt metal swords during an alcohol-fueled bloodbath, surrounded by cheering crowds.

"The killing is brutal, there can be no doubt about that," said Wendy Higgins, an HSI spokesperson. To illustrate, she added:

Tanuja Basnet, director of HSI, said, "The Gadhimai festival is an unholy bloodbath that is not part of Hinduism and has no place whatsoever in any religion."

The Gadhimai festival is an unholy bloodbath.

This killing festival peaked in 2009 when an estimated 500,000 animals were ritually slaughtered. This figure fell dramatically in 2014 to around 30,000, largely due to protests by local and international animal rights groups.

In 2015, following efforts by Animal Welfare Network Nepal and HSI, India, the Gadhimai Temple Trust announced it was banning animal sacrifice at future festivals. Despite these efforts, however, animals continue to be killed by the thousands.

The origin of this festival can be traced to approximately 265 years ago when the founder of the Gadhimai Temple, Bhagwan Chowdhary, dreamt that the Hindu goddess Gadhimai wanted from him human blood sacrifice for freeing him from prison, protecting him from evil and bringing him prosperity. The priest offered animal sacrifice instead, and ever since then, this practice has been repeated every five years in Nepal in an attempt to please the goddess.

Devotees believe that if they don't offer a sacrifice to this Hindu goddess of power, they will not be able to avert future calamity and their prosperity will be affected, Higgins explained.

"We are battling centuries of belief, so we know this won't be an easy battle to win. But we will do everything we can to stop this unnecessary bloodshed," said Alokparna Sengupta, managing director of HSI, India, in a statement.

Being at the festival, she added, was "one of the most depressing and challenging experiences of my life. ... The hysteria and apparent jubilation at seeing confused and frightened animals being slaughtered was very disturbing."

"We may not have a bloodless Gadhimai this time," Sengupta said, "but we are determined that one day we will see an end to this gruesome spectacle."

Manoj Gautam, an animal rights activist with Nepal's Jane Goodall Institute, noted the religious aspect of the ritual seems to have been lost in recent years.

"There is no compassion. There is no spirituality. It is just sport. It is wasteful," he said.

The animals are decapitated using a large sword-like instrument. ... This includes mothers killed in front of their babies.

In September, Nepal's Supreme Court ordered the government to come up with a plan to phase out animal sacrifice and pass laws making it illegal. At this point, however, the killing continues.

Sacrifice to gods and goddesses of grains, animals and even humans goes back to the beginning of human history. It is well-documented as a ritual norm — especially throughout ancient Europe, the Near East, Africa and the Western Hemisphere — among peoples who never met or had any influence on one another.

Offering natural life usually in the form of blood sacrifice to the gods, or in the case of ancient Israel, to God, was understood to be a way of ritually atoning for sin and uniting oneself with the deity — a universal desire of the human heart.

According to Catholic belief, Jesus Christ, the "Lamb of God," was sacrificed for the sins of the world, restoring justice and uniting mankind back to God. After Christianity spread, animal sacrifice gradually began to disappear throughout much of the world.

As the Catechism of the Catholic Church states, "Having thus established [Christ] in solidarity with us sinners, God 'did not spare his own Son but gave him up for us all', so that we might be 'reconciled to God by the death of his Son'" (CCC 603).

Catholic critics note that faith in the One Sacrifice that establishes the eternal covenant between God and man adds to the sense of futility and waste that this festival elicits among Christians and those influenced by them throughout the world. 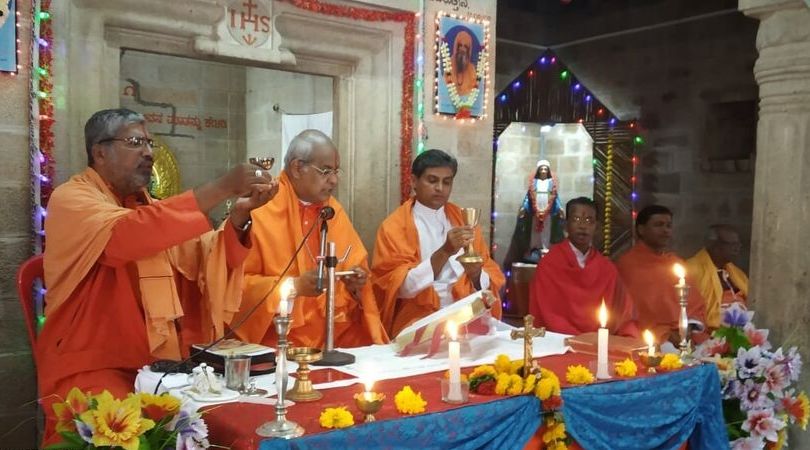