Whether it was Franciscan Friar Daniel Horan’s June 26, 2015 celebration of same-sex “marriage,” or the blasphemous advertisement (image on the right) published in America’s December 2005 issue which depicted a statue of the Blessed Virgin Mary enveloped in a condom, this Jesuit-run publication is constantly pushing the envelope against the Magisterial teachings of the Church. And yet, despite America Magazine's reputation for heterodoxy, this is the first time it has even been shown to be directly linked to outright communism.

According to America's website, Dean Dettloff is America's Toronto Correspondent and a junior member of the Institute for Christian Studies.

In addition to this, Dettloff is the co-host of a podcast bearing an extremely blasphemous logo called The Magnificast. The Magnificast bills itself as "a podcast exploring Christianity and the political left," but the content of the podcasts are all about socialism and the fusion of communist ideologies with Christianity. 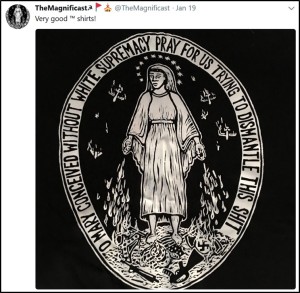 It is also worth noting that Dettloff is also a card-carrying “member” of the Canadian affiliate of Caritas, called Development and Peace. 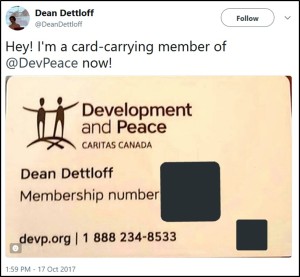 In September 2017, Development and Peace thanked Dettloff for his America article on D&P’s 15th anniversary. 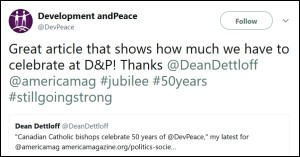 On social media, Dettloff makes no attempt to hide his allegiance to Marxist Communism. What follows are a series of statements Dettleoff has published on his twitter and facebook: