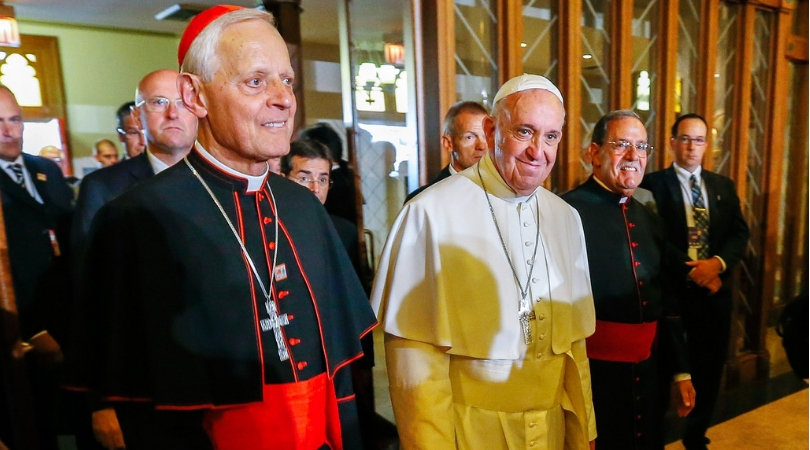 PHILADELPHIA (ChurchMilitant.com) - After Cdl. Donald Wuerl spearheaded a $25 million grant to the Vatican earlier this year through the Papal Foundation, sources confirm the money remains unaccounted for, the Rome hospital designated as beneficiary apparently never having received the grant.

Sources also confirm Wuerl was behind the pope's cancellation of a meeting with foundation members in March, and continues to pull the strings behind the scenes.

Controversy engulfed the Papal Foundation, a charity partially founded by Abp. Theodore McCarrick in 1988 with assets worth $206 million, when three stewards resigned from the Audit Committee earlier this year after Wuerl pushed for the Vatican to receive $25 million — the largest single grant ever given by the foundation. The money was ostensibly to be used toward the Istituto Dermopatico Dell'Immacolata (IDI), a scandal-ridden hospital in Rome investigated by Italian authorities for embezzlement and tax fraud of nearly a billion euros.

Pope Francis had allegedly requested the $25 million in summer of 2017, and Wuerl, then-chairman of the foundation, lobbied members of the Board of Trustees to vote to approve the grant (originally a loan, but revised to an outright grant on Wuerl's insistence).

Board members at the time consisted of all nine U.S.-based cardinals, as well as various bishops and laymen, making up a total of 24 trustees.

Free clip from CHURCH MILITANT Premium
WATCH FULL EPISODE
Jim Longon, former chair of the Audit Committee, was first to voice criticism of the move. A leaked report obtained by LifeSiteNews summarized the problems with the grant.

The initial $8 million was sent without any supporting documentation for the loan. ... There was no Balance Sheet. There was no clear explanation as to how the $25 million would be used. ... The absence of a NEED for our cash; the insistence of a grant, when a loan had been requested; the missing interview of the resigned Executive Director all raise major concerns. Too many Red Flags. This is a badly run business venture, not a helping of our Church or a helping of the poor.

According to inside sources, Wuerl at the time considered Longon a lone maverick, confident the vote to send the $25 million would be approved almost unanimously. He was shocked to find that nine of the 24 board members rejected the proposal after a secret vote.

The Board met in December to discuss the IDI grant. The Papal Foundation had already given $8 million in July to the failing hospital and wanted to give another $17 million over three years. In a carefully choreographed process the 15 bishops outvoted the 9 Stewards with a vote of 15 YES, 8 NO, 1 ABSTENTION (two bishops did not participate). It was a clear out-muscling of the Stewards. Political favor replaced sound stewardship of our resources.

After the vote, and a subsequent board conference call where Wuerl again tried to silence Longon, he quit his position on the board in protest in a letter in January explaining to all the stewards his decision.

"As head of the Audit Committee and a Trustee of the Foundation, I found this grant to be negligent in character, flawed in its diligence, and contrary to the spirit of the Foundation," he said in his resignation letter. "Instead of helping the poor in a third-world country, the Board approved an unprecedented huge grant to a hospital that has a history of mismanagement, criminal indictments, and bankruptcy."

Media reported in March that, after the internal uprising within the foundation, Pope Francis cancelled an annual meeting with the organization. Although the move was reported as originating with the pontiff, inside sources confirm with Church Militant that Wuerl was behind the cancellation. The cardinal had contacted the pontiff and suggested the move in order to send a clear message and muscle the trustees. His tactic worked, and the board agreed to give the pope the remaining $12 million. To date, however, the remaining amount is pending distribution.

Although the move was reported as originating with the pontiff, inside sources confirm with Church Militant that Wuerl was behind the cancellation.

Boston's Cdl. Sean O'Malley was recently announced to replace Wuerl as chairman, with Cdl. Daniel DiNardo as vice chairman. A member of the Ad Hoc Committee informed Church Militant they were Wuerl's hand-picked appointees, made after an initial plan to elect new leadership was scrapped by the cardinal. In other words, Wuerl continues to pull the strings.

The Pennsylvania attorney general's office is mulling the possibility of investigating the Papal Foundation, a 501(c)3 corporation registered in Pennsylvania and bound by state law, after it was revealed the vote to send $25 million to Rome could be voided for potential fraud; McCarrick, under investigation by the Vatican since May 2017 over a sex abuse allegation, voted to send the enormous sum of money to the very entity investigating him — a material conflict of interest that would amount to little more than a bribe.

"The Charitable Trusts and Organizations Section (CT&O) of the Office of Attorney General is in receipt of your email complaint regarding The Papal Foundation," wrote Daniel Sanchez, financial investigator for the Pennsylvania attorney general's office, in a letter obtained by Church Militant. "Please be advised, this matter is currently under review and the office will take any action deemed appropriate."

The Papal Foundation has also been under increased scrutiny after a number of its leaders have been associated with sex abuse. McCarrick, a co-founder, was suspended from the College of Cardinals this summer and consigned to a life of prayer and penance over allegations of abuse of minors and seminarians. The announcement of his suspension launched the Church's "Summer of Shame," a crisis moment in the American Church that has left bishops scrambling to provide answers to angry laity who are withholding donations to the Church in protest of clerical malfeasance.

Bishop Michael Bransfield, former president of the board of trustees, resigned from the diocese of Wheeling-Charlston, West Virginia in September after credible allegations of sexual harassment of adult males.

Monsignor Thomas Benestad, who first chaired the foundation in 1988, was singled out by Pennsylvania Attorney General Josh Shapiro at a press conference in August, where he announced the publication of the grand jury report naming 301 accused predator priests. The report alleged that in the early 1980s, Benestad had forced a nine-year-old boy into oral sex, afterwards rinsing out his mouth with holy water to "purify" him. This would have taken place only about five years before Benestad was named to lead the Foundation.

Future of The Papal Foundation

In spite of recent scandals, insiders are hopeful the Papal Foundation, which has a record of three decades of charitable giving to worthy causes, will overcome its problems and continue to be a force for good.

"I have hopes that The Papal Foundation will take the steps to fix itself so that the Stewards' hard-earned and prayerfully given millions will help the Catholic needy wherever they are in the world," Longon told Church Militant. "There is a 30-year history of good works, and once we fix this flaw in the organization (greed in the hierarchy is not only a flaw, but a sin), people blessed with good fortune will eagerly join in the ministry of The Papal Foundation."