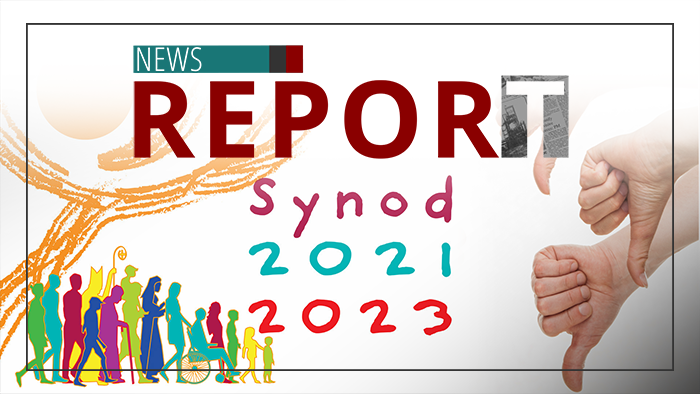 Now that the U.S. bishops have concluded their summary reports [on synodality], Catholic Europe is following suit — but not without controversy. In tonight's In-Depth Report, Church Militant's Paul Murano reviews protest letters by concerned faithful who believe they've been excluded from the process.

As the Church wraps up the diocesan portion of the Vatican's worldwide synodal program, faithful Catholics around Europe are protesting the conclusions.

As the bishops submit their official reports to Rome, young adult Catholics from Portugal to Belgium are speaking out — on what they believe are skewed conclusions.

Dr. Felicity Heathcote-Márcz, behavioral researcher and consultant: "Another key theme has been young people — ensuring the Church is relevant to young people."

Some of those conclusions call for ordaining women, optional priestly celibacy and change in doctrine regarding unnatural homosexual relations and so-called transgenderism.

Many of the youth claim they weren't consulted, and the statistics reflect this. One French bishop didn't deny this, suggesting Catholics in their 20s and 30s are simply disinterested in Church affairs.

Young woman: "So I love that about the Catholic Church: It's rooted, it's grounded, but it's also this creative space that allows us to be fully who we are."

A group of 500 young Catholics in Ireland recently submitted a public letter. In it, they proclaim their love for Church doctrine, but they were never consulted.

One of the letter's organizers said: "Among people who are actually practicing and trying their best to live their faith, there's no desire for [a change in Church teaching]. The duty of the Church is not to change with the world, but to change the world."

A similar open letter was written by Catholics in Portugal. It begins: "We young people, baptized members of the Church ... feel deeply challenged by negativist tendency and [by] the dubious generalization of some of the conclusions ... . [T]he Church [is] seen as a mere social organization and not as a sacramental reality in order to [attain] salvation."

Another open letter out of Belgium, signed by 200 Catholics between 15 and 42 years old, warns of the spiritual danger of calling into question the Magisterium of the Church. The signatories here, too, proclaim their love for the authentic Catholic faith.

Everyone hopes the Holy Spirit is truly guiding this three-year process of discerning how best to serve God's people going forward. Young Catholics who love the Church and refuse to be indoctrinated by the world are making their voices heard.

Since the diocesan phase is complete, the continental phase will begin shortly and conclude in March 2023. It will bring together experts from five continents to develop a document based on the synodal discussions.