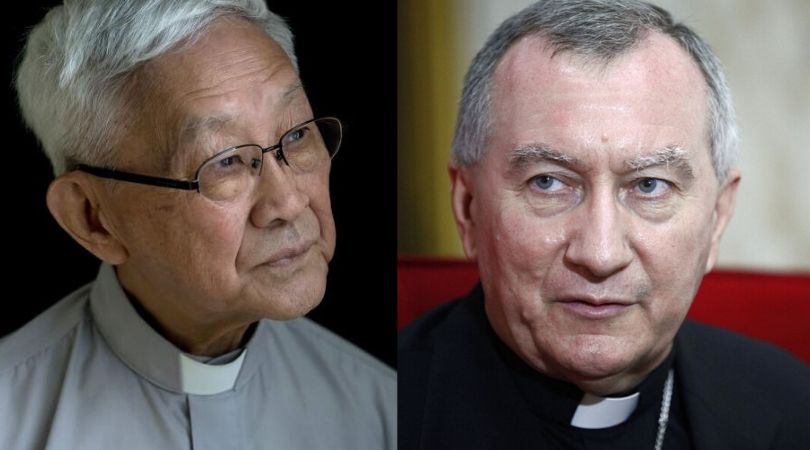 'Everything that refers to China is in the hands of Parolin'

HONG KONG (ChurchMilitant.com) - Cardinal Joseph Zen is doubling down on his assertion that Cdl. Pietro Parolin, secretary of state of the Vatican, is manipulating Pope Francis on all things China.

Uncertain about whether letters to Pope Francis will reach the pontiff — or be intercepted — the archbishop emeritus of Hong Kong is disseminating on social media his message about Parolin's influence on Vatican affairs.

In his missives, Zen claims that Parolin has already delivered the coup de grâce to the Church in China.

"Cardinal Parolin served the last blow to murder the Church in China" with the issuance of "pastoral guidelines of the Holy See concerning the civil registration of clergy in China," he says.

Issued a year ago, the ambivalently phrased guidelines "encouraged" Chinese Catholic clergy who had not already done so to register with the Patriotic (communist-run) church while stating it "understands and respects the choice of those who, in conscience, decide that they are unable to register under the current conditions." Clergy understood that not signing could result in imprisonment, torture and death.

Zen said the document immediately looked "very wrong," to him, noting among other things, it did not specify the responsible Vatican department or include the signature of the responsible authority.

His realization that Parolin is in charge of China — and the pope — occurred when he took his "dubia" in person to the pope in Rome.

There, he learned, from one of the Vatican prefects that "Now everything that refers to China is exclusively in the hands of the secretary of state."

Instead of meeting Zen in person, the pope sent a messenger who said: "You just talk to Parolin."

Finally, when Zen's persistence resulted in an awkward in-person meeting with the pope, Parolin was there but "didn't say a word."

The pope blew off the cardinal saying he would "look into the matter," and as he showed Zen the door.

Zen's reiteration of Parolin's powerful control comes amid a number of important events.

The Vatican-China agreement is about to be reviewed this year with details of the agreement still kept secret by Parolin.

The pope blew off the cardinal saying he would 'look into the matter,' and as he showed Zen the door.

"The peculiarity of this agreement is its secrecy," Zen writes.

"Pope Francis said that he had the last word in the matter [of appointing bishops]," he says, "but I cannot be sure of that unless I can see the Chinese version of the document."

But about the results of the agreement, Zen says he is sure. Parolin, Zen says, "allows the government to confiscate the churches of the underground, to prevent the priests from saying Mass in their private homes and to bar from church functions and religious activities those under 18 years of age."

Zen's reminders come as Hong Kong Catholics are waiting for the full force of the Chinese Communist Party's [CCP's] newly passed security law to hit their island with the same fury as it has been hitting the mainland for decades.

Since the Holy See will appoint no more bishops in the underground, the community will die.

Zen has resigned himself to possible arrest recently saying, "If right and proper words were considered against [CCP] law, I will endure all the suing, trials and arrests" adding, "Numerous predecessors have endured similarly."

As Church Militant has reported, experts are saying the Vatican is helping China to advance global Marxism in exchange for billions of dollars in annual payments.

The plausibility of that claim is coming under greater scrutiny due to the large-dollar discrepancies that have been reported by those examining the Vatican's finances.

Cdl. George Pell, the Vatican's former prefect of the Secretariat for the Economy, revealed in a 2014 article for the Catholic Herald that in his role as prefect he had uncovered hundreds of millions of dollars of clandestine funds in the Vatican Bank. Later he discovered nearly 1 billion euros spread across other dicasteries.

Pell spent a year in Australian prison on a sexual assault charge for which he was ultimately acquitted. Pell has said "most of the senior people in Rome who were sympathetic to [Vatican] financial reform" believe that his arrest was linked to his discoveries of Vatican financial corruption.

In contrast, while Pell was languishing in prison, ex-cardinal and homopredator Theodore McCarrick — who has been called an architect of the clandestine Vatican-China agreement — has been protected by the Vatican. It has delayed for almost two years releasing a report detailing McCarrick's long history of sexual abuse.

A raid on the Vatican's anti-laundering body set up in 2010 under Pope Benedict XVI uncovered nearly a half-billion dollars diverted from Peter's Pence, the pope's charitable fund for the poor — for other uses, including a speculative London real estate deal, production of the 2019 Elton John biopic film Rocketman and to plug holes in the Vatican's annual administrative budget.

Significantly, Zen's reminder also comes as talk swirls about who will replace the 83-year old Francis on the chair of Peter with 65-year old Parolin often spoken of as the front-runner.

As to the fatal blow to the underground Church, Zen says: "Since the Holy See will appoint no more bishops in the underground, the community will die by natural dead."