Bishop pride has run amok and there's no mercy for the faithful.

Is there no limit to the hubris and egos of some American bishops? It has arrived at a place that is beyond galling.

Fifty-nine-year-old Bp. Joseph Tyson of Yakima, Washington (who has rarely demonstrated any friendliness or respect for pro-lifers in his diocese) has done it again — and this time his insult goes far beyond the borders of his own diocese.

A pro-life mobile medical unit that drives around and places itself in front of abortion chambers to provide pregnancy testing and ultrasounds for abortion-minded women had a fundraiser dinner this past weekend to raise money for a second unit.

The non-profit pro-life outfit is called Image Point Mobile Medical and has enjoyed success with the mobile units helping women change their minds who were going to kill their children.

They secured the speaking services of notable pro-lifer, author, radio and TV Host Laura Ingraham, who is also, and importantly, a convert to the Catholic faith. And she converted to the Faith right in the middle of the homosexual priest sex abuse scandal in the early 2000s.

So, get this — the bishop, Joseph Tyson, had his staff send out a notice to all parishes that they were not to advertise the pro-life fund-raising dinner because Laura Ingraham was the featured speaker. The bishop's reason: "Laura Ingraham, while having a positive pro-life witness … is a strident opponent of many of the immigration positions held by the U.S. bishops."

You can't make this stuff up, folks. And for all those Church of Nice head-in-the-sanders who keep babbling on that there is no crisis in the Church, explain this one. Go ahead and try.

Here is a well-respected Catholic convert, who has carried the torch for the Faith in many dark, secular media caverns, coming to town to help raise money for an outfit trying to save the bodies of babies and the souls of their mothers — who gets slammed by the bishop.

Did we miss something? Or isn't this what Vatican II said the faithful are supposed to be doing — answering the call to holiness, personal holiness, and serving as yeast in the culture?

If every bishop in America didn't call Tyson privately and tell him he's off his rocker on this one, then someone needs to call all of them and tell them they're off their rockers and need to go back to Theology 101 — and this time actually get formed in the authentic Faith — not a bunch of 1960s and '70s hippie liberal personal opinion theology courses taught by angry ex-nuns and soon-to-be ex-priests.

This story is so over the top we actually had to double-check it again, because it didn't seem right. We looked at Ingraham's Twitter feed. We did all kinds of digging because we couldn't believe a bishop would wig out over this and actually take action against a faithful, pro-life Catholic trying to raise money for a pro-life group.

And after all the checking ,sure as eggs are eggs, that's exactly what he did. He slammed her because of her support for immigration laws, when he tries to insist that a nation's immigration laws should be broken. I wonder if the bishop has a wall around his property? Or locks on his doors? I wonder if you can just walk right into his office or house without permission in defiance of trespassing laws?

This idiotic notion that immigration laws are somehow evil and as evil as abortion is appalling. It isn't Catholic. It isn't right. And it needs to be called out and opposed.

If you saw last week's "Vortex" where we presented the final interview with Dr. Charles Rice, you'll recall he predicted two Catholic churches in America, in effect saying one would be like a state church and the other the authentic Church.

We say, "Bring it on." It's already the case anyway in practice. Let's make these bishops stand up and make a profession of faith either to the state or to God. We've seen all this before — the English Reformation comes to mind — where bishops refuse to back Church teaching in favor of going along with the state to feather their own nests, and then they turn on the faithful.

Is there a way to vote a bishop out of office, this being an election year and all? Just sayin' ...

And as a brief segue: If there ever was a tremendous Catholic bishop to vote for it would be the great St. Patrick, whose feast day is coming up on March 17. Over the weekend we began a flash sale on these authentically Catholic St. Patrick's Day t-shirts and sweatshirts.

Click the link to take a look at the different styles and colors and represent the holy St. Patrick with honor this year! The flash sale ends Thursday to guarantee shipping by St. Patrick's Day, so be sure to get your order in before the sale closes. 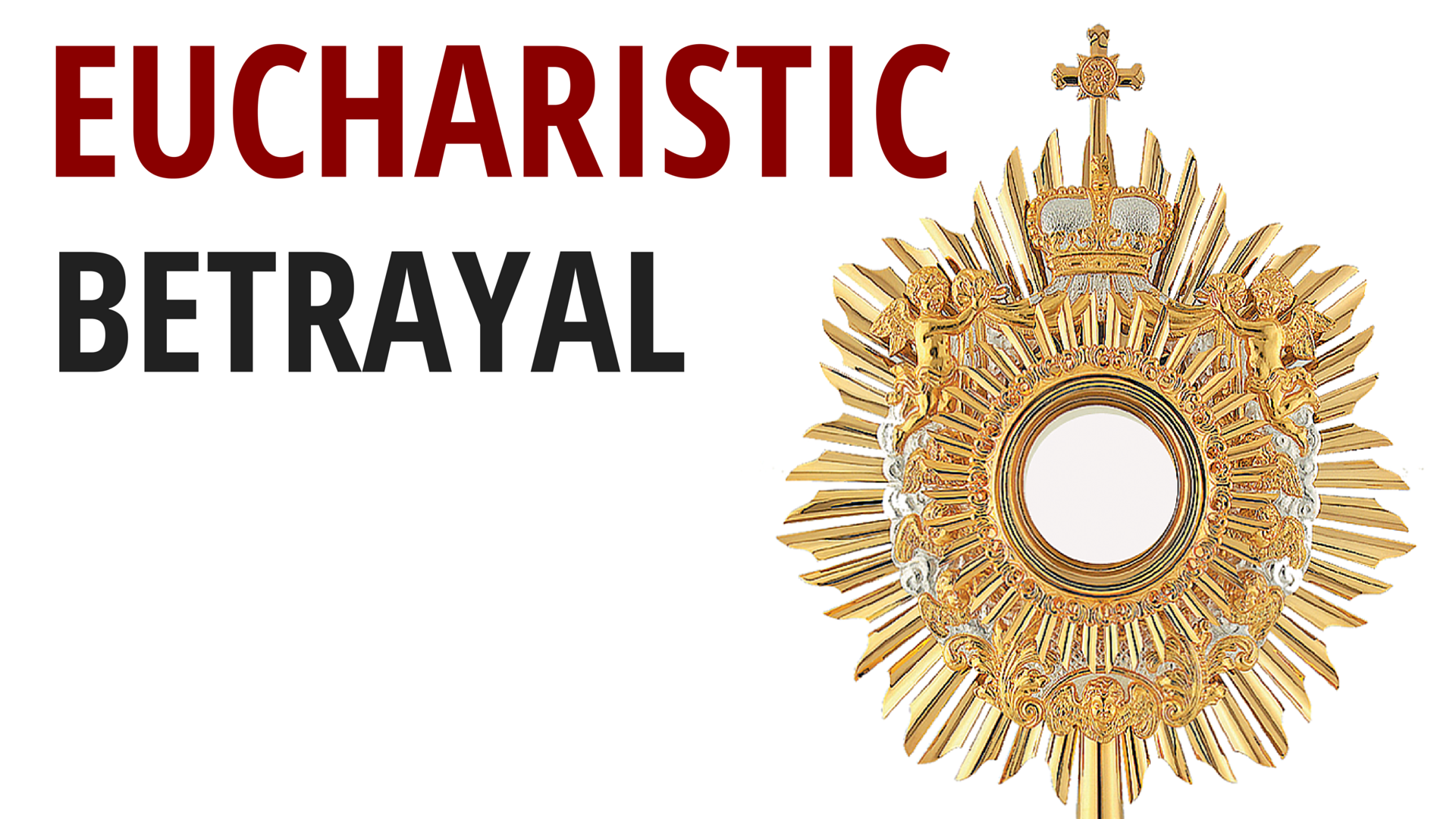 Eucharistic Betrayal
Time to take out the trash.