Bracing for the confirmation battle

Judge Amy Coney Barrett: "A judge must apply the law as written."

Judge Amy Coney Barrett is the official Supreme Court nominee, and all eyes are now on the brutal confirmation battle that lies ahead.

The attacks have already begun — some questioning whether she legally adopted her two Haitian children, others wondering about her fitness as a mother.

And Democrats are vowing to boycott Barrett — senators like Hawaii's Mazie Hirono and Connecticut's Richard Blumenthal refusing even to meet with her.

Sen. Blumenthal: "My Republican colleagues are robbing this confirmation of legitimacy."

If confirmed, the 48-year-old Barrett would be the first Notre Dame Law School graduate to sit on the nation's top court.

Like her mentor, the late Justice Antonin Scalia, whom she clerked for, she is a pro-life Catholic and an originalist and is considered his ideological heir.

Judge Barrett: "Justice Scalia was committed to the idea that his opinions should never be substituted for the rule of law."

That fact has the Democrats terrified, and is at the root of their rage: the most liberal member of the court, Ruth Bader Ginsburg, being replaced by an ideological clone of the archconservative Scalia — more than tipping the court, actually cementing it in the conservative mold for decades to come.

She was nominated to the 7th Circuit Court in 2017. Among those who supported her nomination: every law clerk who served during Barrett's time at the Supreme Court.

Professor O. Carter Snead: "That includes folks who clerked in the chambers for Ruth Bader Ginsburg and Stephen Breyer. And they all wrote a letter saying she had extraordinary integrity and was the smartest person in the building."

Sen. Dianne Feinstein: "The dogma lives loudly within you."

With her now back in the spotlight, media is already firing first salvos against her faith, questioning her membership in the charismatic group People of Praise.

Mike Nikitas, New England Cable News: "Supposedly this group has a quote-unquote covenant or loyalty oath that you take. If so, did she take that? What does it mean to you?"

Newsweek even published a false headline claiming People of Praise inspired the dystopian pro-abortion novel The Handmaid's Tale, a story the magazine was forced to correct.

Sarah Huckabee Sanders: "[She's] a very conservative, strong woman, they are attacking her for her Christian faith."

Central to this battle is Roe v. Wade. While Barrett is clear she won't impose her ideology from the bench, she's also indicated Roe is not beyond reversal. For instance, in this 2013 article discussing precedent (what's known as stare decisis), she says, "Stare decisis is not a hard-and-fast rule in the Court's constitutional cases, and the Court has not been afraid to exercise its prerogative to overrule precedent."

The fireworks are slated to begin Oct. 12, when confirmation hearings are scheduled to start. After the character assassinations of prior High Court nominees, Barrett's supporters are expecting the same from the Democrats — and are bracing for a vicious battle. 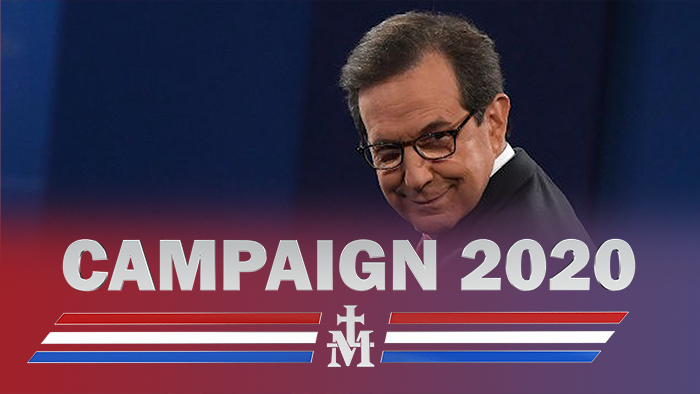 Is Chris Wallace Biased?
Host of the first presidential debate