The official webpage for the Biden-Harris ticket says, "Biden believes the Green New Deal is a crucial framework for meeting the climate challenges we face."

But in the first presidential debate, the former vice president seemed confused whether or not he supported the radical Green New Deal.

Biden: "The Green New Deal will pay for itself as we move forward. We're not going to build plants that in fact are great polluting plants."

Chris Wallace: "But are you going to support the Green New Deal?"

Biden: "No, I don't support the Green New Deal."

Hydraulic fracturing, a method of extracting oil or gas known popularly as "fracking," is a hot button for climate-change enthusiasts.

But with good reason, an article on RealClearMarkets asks, "When It Comes to Fracking, Which Biden Should We Believe?"

But after Biden changed his position, she followed suit:

Reporter: "During your primary campaign, you said that you supported a [fracking] ban. Are you comfortable with Joe Biden's position?"

Harris: "Yes, because Joe is saying, listen, one, those are good paying jobs in places like Pennsylvania."

Harris mentions Pennsylvania because, as an analysis published on EnergyNow notes, "The western Pennsylvania region, once a Democratic stronghold, has become much more Republican in recent years, due partly to Democratic plans to phase out fossil-fuel energy."

One commentator spells out this connection in certain terms, saying, "Joe Biden needs to win Pennsylvania, so he's changed his position on fracking."

While their policy issues have been inconsistent, Biden and Harris have been mostly consistent on pushing the Left's climate-change narrative.

Harris even joined California governor Gavin Newsom in the state, blaming the wildfires on climate change.

Harris, at a wildfire-related press conference: "It is incumbent on us, in terms of the leadership of our nation, to take seriously the extreme changes in our climate and to do what we can to mitigate against the damage, but also what we must do."

And Biden, who's been making headlines recently for corrupt foreign entanglements, is a big proponent of the Paris Climate agreement.

Biden: "Because of global warming, we make up 15% of the world's problem. We in fact — the rest of the world — we've got to get them to come along. That's why we have to get back into the Paris [Climate] Accord."

President Trump pulled the United States out of the agreement.

He campaigned against Hillary Clinton in 2016 on putting America first and is now campaigning against life-long politician Joe Biden on the same ticket, only this time, with a proven track record. 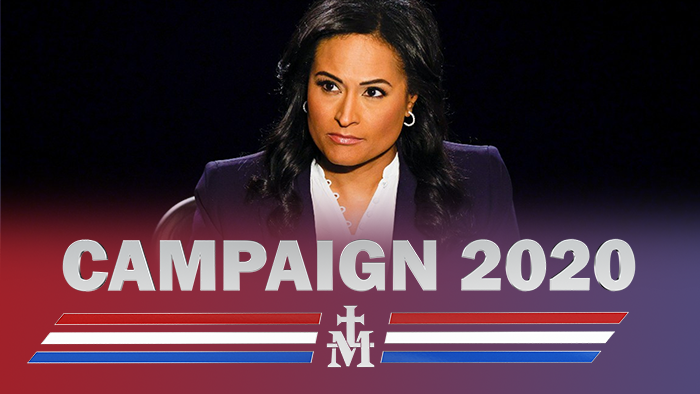 Who is Kristen Welker
Activist not a moderator or a reporter