What's just over the horizon for the Church in America?

As we conclude the week of the one-year anniversary of the public exposing of Cardinal McCarrick's evil, Church Militant has been interviewing various notable Catholics to ask their opinion on the state of affairs in the Church.

And remember, the evil which was exposed in the McCarrick revelations were not just isolated to McCarrick — far, very far from it.

Besides his own personal homopredation and corruption, what came to light was the entire network of devil clerics who created and supported — and still continue to support — an environment in which wicked men in miters can prosper.

And given the phony actions to police themselves, we asked our good friend Dr. Taylor Marshall what he sees for the Church in the near future as he peers into his crystal ball. 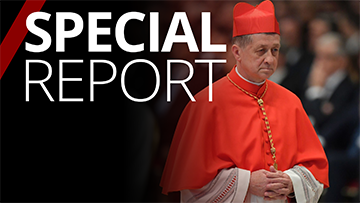 Cardinal Cupich Under Investigation
Closing in on corruption and cover-up.