Evil does have its hour — but Truth has its day.

As we wrap up this particular trip to New York covering the initial part of the gay embezzling priest story and the archdiocese and Cdl. Dolan's pathetic, immoral and possibly even criminal conduct, a few reflections.

The Catholic Church has a homosexual priest problem. That much has been made clear time and time again. The issue in this particular case is not just that this salacious case involved lurid accounts of sadomasochistic sex, but that many priests in the archdiocese knew about this case They tell us off the record that this has been allowed to go on because of homosexual relationships stretching back decades and a homosexual collective that runs the archdiocese.

Compare this, for example, with a case in the diocese of Brooklyn where, just this year, a priest accused of financial impropriety at a parish by parishioners was removed in less than two months. This case would still be ongoing if not for a sensational lawsuit and lurid headlines and reporting by Church Militant — which, by the way, is still the only Catholic media outlet to pick up on this week-long story now — which leads to another thought, one we have talked about numerous times: The mainstream Catholic media, the Church of Nice blogs and the establishment Church simply cannot be trusted to bring Catholics truthful information.

Here we have a case of a sitting cardinal in the most notable archdiocese in the Western hemisphere being sued for a million dollars for negligence in the case of a gay priest stealing from the parish — and not one Catholic news agency thinks this is newsworthy. The local New York papers here have run something on this story for at least five days in row — yet the Catholic media does nothing, because they are all in the tank for the establishment. They are complicit in the evil in the Church because they keep their mouths shut about it. And they keep their mouths shut because they are all in with the establishment fortress.

This mindset — this lackluster, lukewarm, status quo, never-rock-the-boat approach — is destroying the Church from within. Men like Cdl. Dolan are allowed to pass over scandals and ignore them because they know they will never be called out or challenged by those milquetoast lackeys more concerned about their careers and money than the truth and souls.

This is exactly how the whole homosexual priest sex abuse scandal went on for so long, this same attitude. Homosexual men have infiltrated the Church for decades, and whether they intended to or not — some did probably, others not — they have been part of a destruction of the Faith that staggers the mind. And their accomplices among the hierarchy are even more staggering. The very men consecrated to protect and love the sheep have abandoned them for every corruption conceivable. The silence around this evil, the participation in these evils, the refusal and denial of so many regarding this evil, shows how deeply the diabolical has dug its way into the Church.

The only way to confront this — and it must be confronted — is to resist it at every turn, call it out, drag it out and expose it for what it is. The homosexual subculture, those bishops who protect it, advance and even participate in it, the refusal to address it by Catholic so-called media — do none of these people have any fear of God? It is, after all, the faithful who suffer here. No one is guarding the souls from the frightful enemy, first of all, of those who suffer with same-sex attraction. Immoral clerics are willing to abandon their duty to help these live faithful lives. They will have to give an account for their unfaithfulness before being consigned to everlasting fire — senior clergy who allow this filth and even support it by praising, allowing or keeping silent about various parishes in their dioceses who promote the sin of sodomy.

Here in New York we are told by various clerics and laity that a number of parishes are privately performing same-sex unions or blessings. They do it because they know the homosexual collective under Cdl. Dolan will not object. Again, they have no fear of God.

The absence of fear of the Lord — and yes, it does mean more than just awe of God — has blinded them to other truths of the Faith. They despise tradition, in nearly every form. They drone on about "mercy" and "all are welcome," but their words are empty because their hearts are full of malice for those who preach authentic mercy — which is to say, the merciful truths of God meant to lead to salvation.

Then there is the pack of jackals who follow after these men who are their tigers and their policies of spiritual suicide because they dare not rock the boat lest they get swamped. They have built careers and pension plans and make decent-to-good salaries by keeping silent whenever a threat to the Faith arises. They help sweep it under the carpet, obfuscate the truth,  distort the facts, misrepresent and confuse the faithful.

And then there is the so-called Catholic media, which went to great lengths to deny or bury the homosexual priest sex abuse story, the Legionaries of Christ evil, the refusal to confront the bishops' lack of zeal regarding things like contraception, Catholic hospitals doing sterilizations, the whole social justice façade dominating the Church, liturgical abuses, catechetical programs based on false ecumenism and so forth.

What this case here in New York has shown, in a microcosm, is the deep problems the Church has, all rooted in a loss of Catholic identity, rooted in a loss of supernatural faith, beginning with the hierarchy. The lawyer for the plaintiffs in the million-dollar lawsuit against Cdl. Dolan and the archdiocese perhaps summed it up best.

This type of behavior, not just of the accused Fr. Miquelis of the world, but more importantly of those in power who enable them, destroys souls, discourages faith in the weak and brings great sadness and scandal into people's lives.

There will be a day of reckoning for all of this — Our Blessed Lord has promised it. And when that day comes, there will be no defending the indefensible, as some do today. In the end, God prevails. 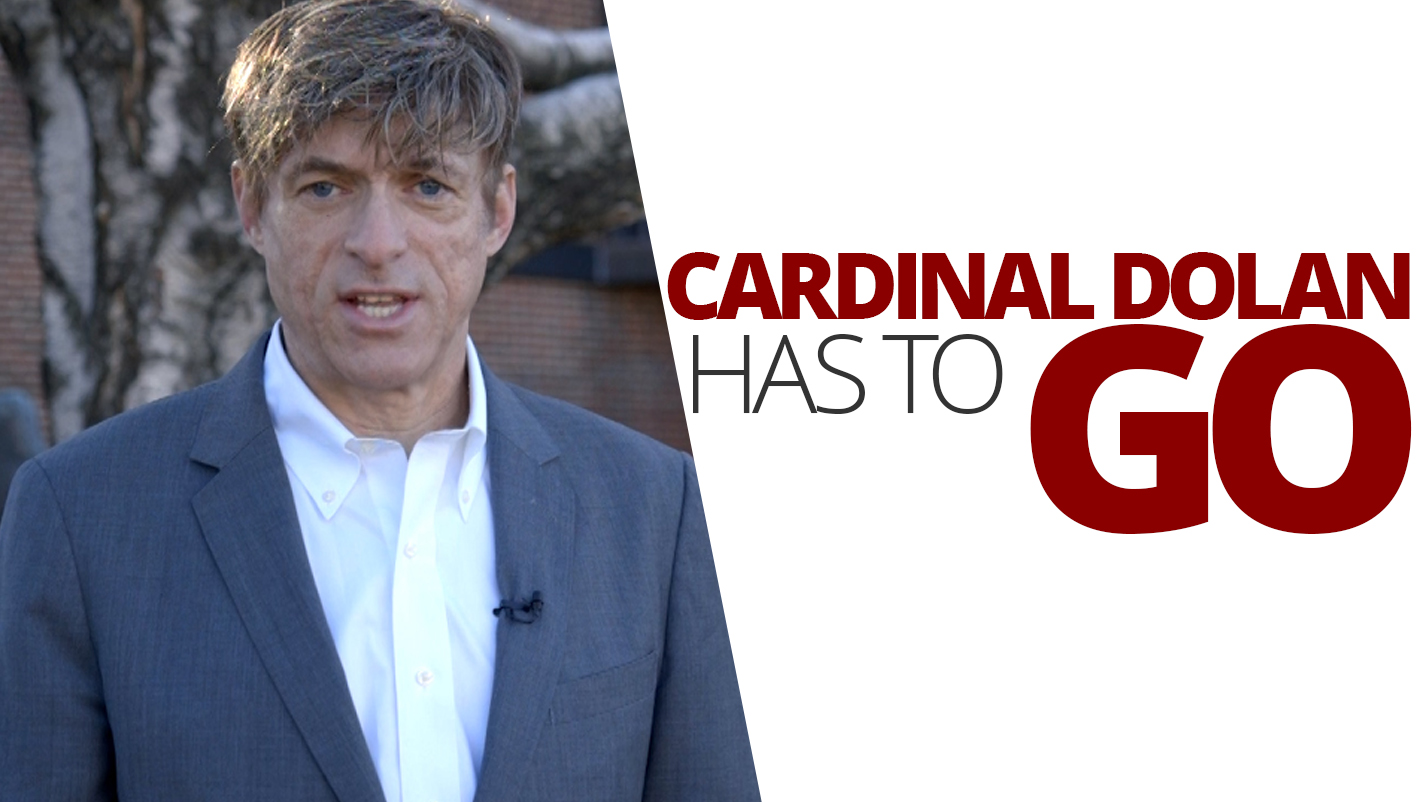 Cardinal Dolan Has to Go!
A growing number of Catholics — clergy and laity — have simply lost faith in Cardinal Dolan.