And chose to keep their mouths shut.

The "outing" of Cdl. Theodore McCarrick — the most high-profile cleric yet to be touched by the homosexual priest sex abuse scandal — has come as no surprise to various leaders in the Church. That's because they already knew — everybody knew. It was, as the saying goes, an open secret.

While McCarrick was bishop of Metuchen and then Newark, New Jersey later, he had a beach house in the state that was notorious for him taking seminarians there and forcing himself sexually on them.

Some of the seminarians threatened suit, and the Church settled with them privately. McCarrick, as part of the Chicago Cardinal Joseph Bernardin Big Gay Machine, factors large in the conversion of the American priesthood and episcopacy into a gay profession — as The New York Times has called it.

Details have now emerged that this particular incident involved McCarrick molesting a teenage altar boy in St. Patrick's Cathedral as the boy was vesting for Midnight Mass.

But this particular case, which deserves justice and hopefully the New York archdiocese has to pay through the nose for it, serves as a springboard for the ongoing discussion of the need to keep gay men out of the priesthood. It also serves as a springboard for an even larger discussion on the clerical groupthink that goes on every day to protect errant clergy, even in the face of scandalous sins.

A lot of people in the Church knew about McCarrick, even laity, and if laity know, you know darn good and well that priests knew and their bishops. There were occasions at McCarrick's Jersey shore beach house where other clergy were there joining in the sexual assaults.

And McCarrick was not alone in this by any stretch. In fact, it seems so many bishops were doing this kind of thing, that to not have been engaged in it would have been the odd man out. There are, for example, the well-known stories of three U.S. bishops who would routinely travel to a number of seminarians and "pick out" the young men they wanted to spend the weekend together with as a group.

This occurred more than once and involved one very prominent seminary in the Midwest. In the 1970s and 1980s, within a very clear living memory for many of you watching this, the American priesthood and episcopacy became overrun by gay men — many of them active.

It was they who brought the disgrace of the child sex abuse problem into the Church which has robbed you of almost $4 billion, and it was their allies in the clergy who knew about it and covered it up so they could protect their own miserable careers.

But while they were not prowling — and that's the perfect word — the hallways of seminaries to locate young men to satisfy them sexually over the weekend, they busier still destroying the Church by bringing in even more homosexual men and promoting them. And note this well, these men are dangerous. They are spiritual terrorists — the whole emasculated lot of them.

Even here in Detroit — before we were as well known as we are today — a local homosexualist monsignor who used to be a very high ranking official in the archdiocese worked quietly to destroy us with a whisper campaign. He was joined in that work by various chancery personnel who we know all too well. They lied to us. They lied about us.

But this is how the homosexual clerical circle operates. It is diabolical and it must be exposed — which it is — in the Church and defeated.

McCarrick is perhaps a prime example of this. He was raiding seminaries for much of his career and getting young men down to his beach house. Publicly, he was doing everything he could to advance the cause of protecting abusers like himself and others in the Church.

During his lengthy career, McCarrick tried stifling efforts to protect child victims from homosexual predatory priests. He was very public in his opposition to a proposed Maryland bill that would require priests to report suspected child abuse. He hid his attacks against the legislation behind claims of protecting the seal of confession — this while he was at the same time in bed with seminarians, rubbing them and asking them to call him "Uncle Ted."

McCarrick chose to protect fellow gays in the clergy at the cost of children. Unsurprisingly, he also fought legislative efforts to expand the statute of limitations so victims could still file charges. But McCarrick also lied through his teeth to his brother bishops at one of their semi-annual meetings while he was the cardinal of Washington, D.C.

In 2004, the Bush-Kerry U.S. Presidential Campaign was in full swing and the discussion was being had frequently if the bishops should deny Holy Communion to John Kerry — a traitor Catholic. As an aside, it was this discussion where then-bishops Raymond Burke and homosexualist Donald Wuerl went toe to toe over the issue.

Burke tore Wuerl’s flimsy argument to pieces and Wuerl, being a homosexualist, never forgot it and took revenge on Burke when he worked behind the scenes to have Burke demoted in Rome — getting him removed from the Congregation of Bishops and having himself placed on it instead.

But I digress. The bishops said they wanted clarification from Rome on this question of pro-abortion politicians and Holy Communion, so McCarrick took the lead and contacted then-Cardinal Ratzinger who wrote back a letter saying they cannot receive and should be denied, as canon 915 clearly says.

Ratzinger included a footnote — a footnote, mind you — not about the actual politicians but regular anonymous laity, saying they should not be denied for a couple of reasons. But McCarrick lied in his presentation at the next meeting, telling the bishops the footnote, as though that was what applied to the politicians. It did not.

He also tried to pull a fast one at the graveside of notorious Catholic traitor Sen. Ted Kennedy. He read a letter he said was from the Pope, presenting it as a personal note from the Vicar of Christ, when in reality it was a form letter the Vatican sends out on the death of many notable Catholics.

These last two incidents don't involve the gay question, but they speak to the character of the man and the larger question of the gay agenda in the Church. This homosexual crowd, like their counterparts in the culture, leaves no stone unturned, no battle not fought, no issue unmanipulated if it can help them with their psychosis and promotion of sodomy.

They are disturbed creatures who have used their illness and turned it into a dangerous weapon in the Church, a weapon that has, directly and indirectly, cost tens of millions of souls.

They don’t believe. The supporting cast around them doesn't believe. Those in the chancery who might agree but still go along don't believe enough. There is no way a person can possess supernatural faith and behave like this — not possible.

McCarrick — who reports suggest his mind is beginning to fail — will never face criminal charges or jail time. But there is another court that he will face, which we all will face. It is the court that the homosexualist crowd ignores and wants all of you to forget about as well.

McCarrick is not alone in being a sexually active highly placed churchmen — they are legion, but the only way you find out about it is through the civil court system when the Church is forced to come clean.

Why was McCarrick not outed by fellow bishops and priests long before this? Because his ideology — his sin — is shared by a shocking number of fellow bishops who cover for each other.

If you aren't disgusted by the spiritual carnage of all this, then you don't love the Church. 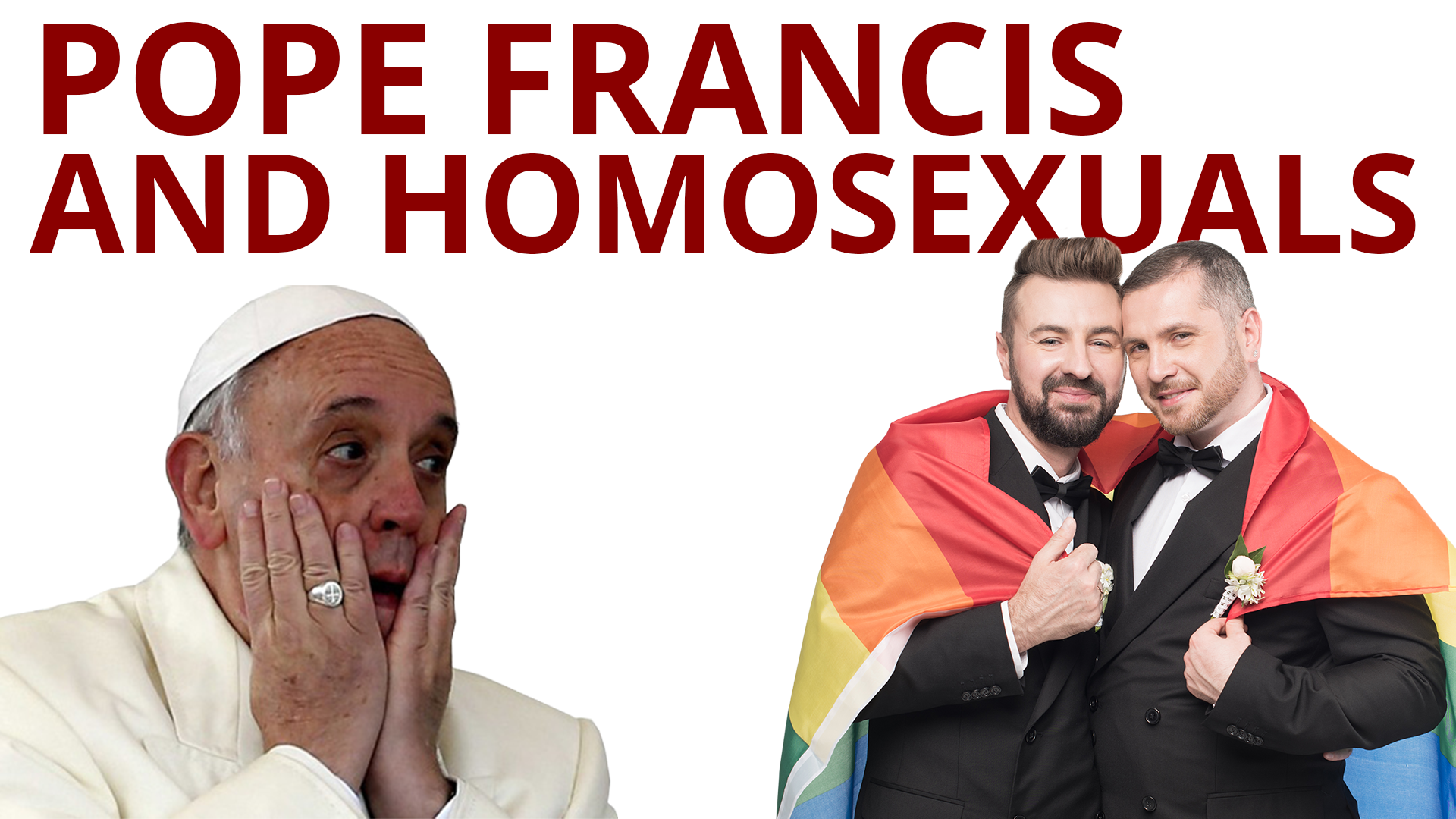 Pope Francis and Homosexuals
Has he caught on to something?