Governor Kim Reynolds of Iowa: "But I strongly oppose vaccine passports, and I believe that we must take a stand as a state against them, which I intend to do either through legislation or executive action."

Iowa's governor is thwarting efforts to mandate vaccination. Wednesday, Gov. Kim Reynolds emphasized people should make health decisions for themselves, and she opposed using a system of vaccine passports to sideline those who haven't gotten the jab.

Reynolds: "Since the start of the pandemic, I've constantly — consistently, excuse me — put my trust in Iowans to do the right thing, rather than demand or mandate it. And vaccination is no different."

Reynolds is one of many Republican lawmakers around the country working to protect civil liberties by ruling businesses can't discriminate against the unvaccinated.

In Missouri, the state senate passed a bill Wednesday that would prohibit requiring vaccine passports for travel in the state.

Earlier this month, Florida's governor Ron DeSantis likewise penned an executive order against the use of COVID-19 passports.

DeSantis: "It's completely unacceptable for either the government or the private sector to impose upon you the requirement that you show proof of vaccine to just simply be able to participate in normal society."

Meanwhile in Texas, Gov. Greg Abbott prohibited the government — as well as some private entities — from requiring vaccination.

Abbott: "Government should not require any Texan to show proof of vaccination and reveal private health information just to go about their daily lives."

Lawmakers in at least a dozen other states are working to fight COVID passports, either through legislation or executive orders.

But not everyone in the halls of government is concerned with privacy and liberty. Democrats — especially in blue states like New York, Illinois and Hawaii — want to make getting COVID shots a requirement for normal life.

News anchor: "New York rolling out a new app some people call a COVID passport — a one-stop shop that stores your tests and vaccine status and notifies businesses and venues."

At the federal level, the Biden administration has rejected any talk of imposing a COVID passport nationwide.

Jen Psaki, White House press secretary: "The government is not now, nor will be supporting a system that requires Americans to carry a credential."

This battle is being duked out at the state level — furthering the divide between red and blue states. 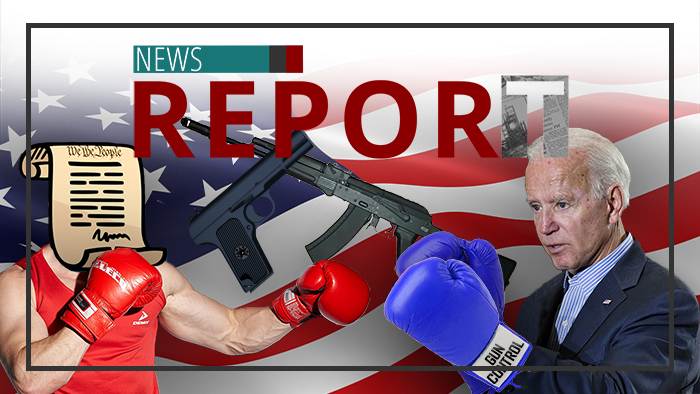 Showdown on Guns
States vs. feds