President Trump: "We in America believe that every child, born and unborn, is a sacred gift from God."

President Trump is lauded as the "most pro-life president" in U.S. history. And Republicans have been trending in a pro-life direction for almost 20 years.

But there are a handful of Dems who are pro-life.

Catholic Dan Lipinski, representing the 3rd Congressional District of Illinois since 2005, is one of the few.

Rep. Lipinski: "The pro-life movement is not going to be successful in this country without pro-life Democrats. We need Democrats, Republicans, Independents, everyone working together."

Lipinksi's re-election, however, is endangered by his fellow Dems — as endangered as thousands of babies about to be aborted in their mothers' wombs.

Chicago's Mayor Lori Lightfoot, for example, has tweeted: "I support a big tent, but there's no room under the flaps for anyone who is actively seeking to deny women control over our bodies. Time to leave @danlipinski."

Lightfoot is supporting Lipinski's challenger, Marie Newman, a radical supporter of abortion and mother of a transgender daughter.

Commenting on this divide, Vice President Pence has said: "Tragically, at the very moment that more Americans than ever before are embracing the right to life, leading members of the Democratic Party are embracing a radical agenda of abortion on demand."

In the meantime, unborn babies are being murdered, and the Dems are eating their own. 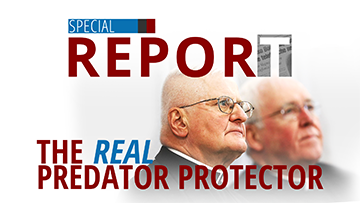