An EWTN host is choosing silence over truth.

Teresa Tomeo, longtime Catholic TV and radio personality, is based in Detroit, Michigan. Her pastor is Msgr. Michael Bugarin, sued by local Catholics for fabricating a rape charge against their pastor, Fr. Eduard Perrone, who wound up suspended from ministry based on the fake allegation.

Archbishop Allen Vigneron, vice president of the U.S. bishops' conference, is also named in the lawsuit.

Tomeo maintains a close relationship with the archdiocese, recently featured as keynote speaker at the seminary, and in wide demand to give talks, conferences, tours and pilgrimages, making thousands of dollars off Catholics.

Yet her silence on this historic lawsuit in her own archdiocese is deafening, refusing to speak about it, ignoring and deleting queries — even blocking this reporter from her Facebook page when asked for public comment.

While fellow radio host Al Kresta, president and CEO of Ave Maria Radio, defends her silence, he himself believes Perrone is innocent.

His comments to Church Militant: "I have stated my confidence that he is innocent of the accusations against him. From the start I've been disappointed and surprised that the AOD felt compelled to pursue this course of action against Fr. Perrone."

Kresta has twice invited Perrone's attorney onto his radio show, yet Tomeo sits on the sidelines saying nothing.

Establishment media has rightly been criticized for staying silent on Church corruption, beholden to the bishops, closing their mouths in order to stay in the good graces of the Church hierarchy.

Tomeo's silence is proof of yet another establishment media personality who appears to be choosing career and cowardice over moral courage. 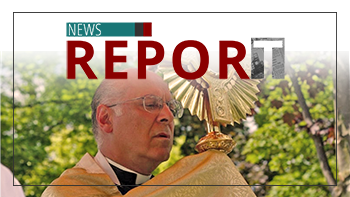