Fighting for a Targeted Priest

Catholic parishioners speak out on lawsuit against Detroit archbishop

Brien Dux: "We need to defend the pastor because this is false."

A Catholic fighting for his priest.

Brien Dux: "We want our pastor back. You lied to us. This is your responsibility."

Brien Dux: "The buck stops with the archbishop. He knows all of these facts that are in there ... ."

He and about a dozen other parishioners have launched a class-action lawsuit accusing Vigneron — newly elected vice president of the U.S. bishops' conference — of targeting an innocent priest, Fr. Eduard Perrone.

Michael Voris: "Are the charges that have been publicly leveled against you true or not?"

Perrone was suspended from ministry last year after a former altar alleged abuse — a claim he has since denied.

But evidence reveals a fabricated rape charge, with the man spearheading the investigation — Msgr. Michael Bugarin — directing the frame-up.

Msgr. Michael Bugarin: "It's just part of the process."

In spite of the accuser's repeated denials of ever being raped, Bugarin took that false allegation to Detroit's review board, which then suspended Fr. Perrone.

In spite of the archbishop's knowledge of what some say are Bugarin's criminal actions, Vigneron has done nothing to restore Fr. Perrone, parishioners so angry they think the archbishop needs to resign.

Michael Voris: "Should he still be archbishop of Detroit?"

Michael Voris: "So it's an apology and a step down."

As the battle continues to clear Fr. Perrone's name, he languishes without an assignment, forbidden to set foot on parish property, banned from speaking to parishioners, exiled from his parish family. His parishioners, attorneys and other Catholics continue to pray — and fight — for justice. 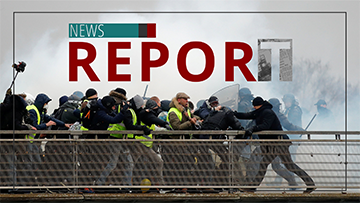 France Fighting Back
Church's eldest daughter: down but not out