A group of faithful Detroit Catholics are keeping prayerful vigil for their beloved priest.

Friday, members of Assumption Grotto parish gathered outside the Detroit chancery to pray for Fr. Eduard Perrone and for the whole Church.

Grotto parishioners have been outraged at Perrone's treatment by archdiocesan officials.

"I don't think he's been treated fairly at all," said Ken Reilly. "I believe that the archdiocese actually had many miscues in what they did with him and his case, and I'm hoping that they rectify it soon."

Based on a so-called repressed memory from 40 years ago, the traditional priest was removed from his pulpit in July, accused of sexually abusing a teen boy.

Perrone categorically denies the allegations, but was not given a chance by the archdiocese to publicly proclaim his innocence.

Church Militant has uncovered glaring problems with the case, including an attempt by archdiocesan staff to convince a witness to lie about Perrone, saying the priest tried to molest him, when that never actually happened.

"From everything we've heard, that you yourselves have reported, that his team has reported in press releases, there just doesn't seem to be a lot of evidence there for anything he's accused of," said Jeff Parlow.

"There's so much evidence that Fr. Perrone is absolutely innocent and a very faithful and holy priest," added Katie Dux.

Saying Fr. Perrone has been denied justice, Assumption Grotto parishioners are appealing to Our Lord and Our Lady for a successful resolution to the case. 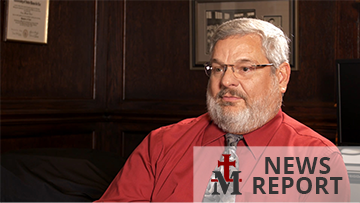 Witness Accuses Archdiocese of Detroit of ‘Set-Up’
James Fortenberry 'pressured' to give statement against Fr. Perrone