Remains will be buried but no date given

Last September, when police arrived at the home of recently deceased Indiana abortionist Ulrich Klopfer, Sheriff Mike Kelley explained the horror they discovered: "Personnel on scene were directed to an area of the property in the attached garage of the home where 2,246 medically preserved fetal remains were located."

Between 2000 and 2003, Klopfer transported the aborted remains from Indiana to his home in Illinois, where he stored them in more than 70 cardboard boxes.

It's been more than four months since the babies' remains were discovered and people want to know what's happened.

In October, Indiana Attorney General Curtis Hill pledged that the remains will be "given the decency of a burial that they deserve."

According to a December preliminary report from the AG's office, the remains are in St. Joseph County, Indiana.

The AG intends to bury, not cremate, them at a public cemetery in a non-denominational service.

Church Militant contacted the AG, who said, "We are finalizing arrangements and will share those at the appropriate time."

Dr. Monica Miller, Director of Citizens for a Pro-Life Society, based in Michigan, says she's frustrated with the lack of communication.

Her organization, which invited people to name each of the 2,246 aborted children, has been asking for an update and feels in the dark about what's going on.

A similar discovery of aborted remains occurred in California in the 1980s when 16,000 babies were found in a cargo container at the home of the operator of a so-called medical lab.

It took three years for the state to bury the bodies. 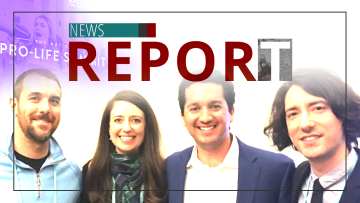