Focus is on environmentalism, interreligious dialogue

Faithful Catholics are increasingly troubled by a Vatican event coming up in May, where world leaders and young people will meet with Pope Francis to forge a so-called Global Education Alliance.

In a recent interview, Cdl. Raymond Burke said the meeting seems bent toward making a one-world government, adding, "With the spread of Islam, especially in Europe but also in the United States, there is an effort to dull people's consciousness about the Kingship of Our Lord Jesus Christ as it is proclaimed in the gospel."

When the Pope announced plans for the education meeting last September, he said the purpose is to foster peace around the world, and raise concern about the environment.

Pope Francis: "We need a global compact on education, aimed at developing a new universal solidarity and a new humanism."

The global gathering in Rome will come five years after Francis released the encyclical Laudato Sí — largely focused on environmentalism.

Last February, Pope Francis and a Muslim imam co-signed the "Document on Human Fraternity," which erroneously claims that God wills the existence of multiple religions.

It seems the event in May will be in the same vein.

Pope Francis: "First of all, the ground must be cleared of discrimination, as I stated in the document that I recently signed with the Grand Imam of al-Azhar in Abu Dhabi."

As often happens during Francis' pontificate, the build-up to this Vatican event leaves faithful Catholics worried for the Church and the world. 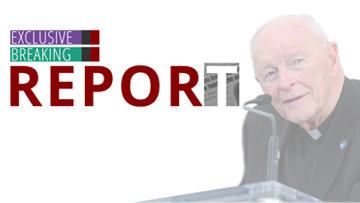 Breaking News: McCarrick Mystery
The hunt is on