Prenatal murder going back to the states

After 50 years and 65 million lives lost, the Supreme Court of the United States has finally overturned the unjust and constitutionally aberrant Roe v. Wade.

Church Militant's Hunter Bradford provides analysis of the Roe rebuke and weighs in on what took the court so long.

Supreme Court justices: "Courts in general should follow their past precedents. It's a precedent of the United States Supreme Court. It has been reaffirmed many times over the past 45 years. I have no agenda to try to overrule Casey. I have an agenda to stick to the rule of law and decide cases as they come."

Some precedents, however, must be overturned because they lack a basis in the Constitution. That was the message of the high court's majority today in its historical decision in Dobbs v. Jackson Women's Health.

As Justice Samuel Alito wrote in today's majority opinion, "Stare decisis does not compel unending adherence to Roe's abuse of judicial authority. Roe was egregiously wrong from the start."

He continued, "When it comes to the interpretation of the Constitution, the great charter of our liberties, we place a high value on having the matter settled right."

Hence, having cleared the way for a substantive deconstruction of Roe by shooting down the mindless adherence to stare decisis, Alito proceeded to savage the 1973 judicial travesty.

Rep. Lauren Boebert, R-Colo.: "The Constitution doesn't have a right to abortion. In fact, the 14th Amendment says the exact opposite. ... It says that the state shall not deprive any person of life."

The legal reasoning Alito ended up using in his majority opinion was true to that found in the original leaked draft wherein he stated "the Constitution makes no reference to abortion, and no such right is implicitly protected by any constitutional provision."

Therefore, Alito concluded there is no reason to think a right to abortion is deeply rooted in our history and tradition or that it is essential to our nation's scheme of ordered liberty, as it would have to be in order to enjoy protection under the 14th Amendment.

Rep. Nancy Pelosi, D-Calif., U.S. House speaker: "Because of Mitch McConnell, the Republican Party and the supermajority in the Supreme Court, American women today have less freedom than their mothers."

In other words, the so-called super-precedent of Roe was not based on the Constitution after all — but on activist judges and their own ideological ideas of fairness.

Sixty-five million innocent human beings have been unjustly killed before birth as a result of Roe. Now, as a result of Dobbs, there will be 50 different battlegrounds, and half the nation to convert. 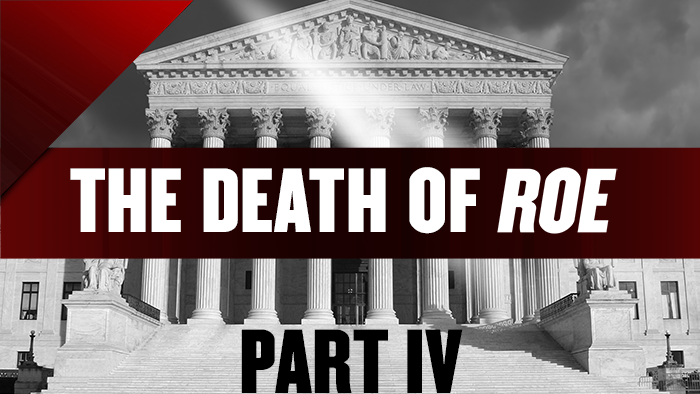 The Death of Roe — Part 4
Abortion bucked to the states