May 18, 2020  0
Podcast Available for Premium Subscribers

Dated May 8 — the feast day of Our Lady of the Rosary of Pompeii, known for the conversion of a diehard satanist in the late 1800s — the "Appeal for the Church and the World to Catholics and all people of good will," which discusses globalists using the Wuhan virus to push for one world government, has yet to receive official acknowledgment from the Vatican or the U.S. Conference of Catholic Bishops.

This, despite the fact that a firestorm ensued in the media over the document. To date, it has racked up 40,000 signatures, which makes the deafening silence from the Vatican even more strange.

The appeal states, "[U]nder the pretext of the COVID-19 epidemic, the inalienable rights of citizens have in many cases been violated and their fundamental freedoms, have been disproportionately and unjustifiably restricted."

An initiative of Abp. Carlo Viganò, the appeal has been signed by lay professionals, priests and  prelates, including prefect emeritus of Congregation of the Doctrine of the Faith, Cdl. Gerhard Müller; bishop emeritus of Hong Kong, Cdl. Joseph Zen; auxiliary bishop of Astana, Athanasius Schneider; and U.S. bishop of Tyler, Texas, Joseph Strickland.

The appeal continues: "[T]here are powers interested in creating panic among the world’s population with the sole aim of permanently imposing unacceptable forms of restriction on freedoms, of controlling people … The imposition of these illiberal measures is a disturbing prelude to the realization of a world government beyond all control."

While neither the Vatican nor the USCCB have responded, since lockdown measures began, Pope Francis has sided with the Italian prime minister against Italian bishops seeking to resume public worship, called for consideration of universal basic income, and joined an interreligious initiative of prayer, fasting and acts of charity to end the pandemic.

Meanwhile, the president of the USCCB, Abp. José Gómez of Los Angeles, has profited from the pandemic by taking $7 million of PPP relief money, in addition to already having a $700 million endowment and $180 million in cash. 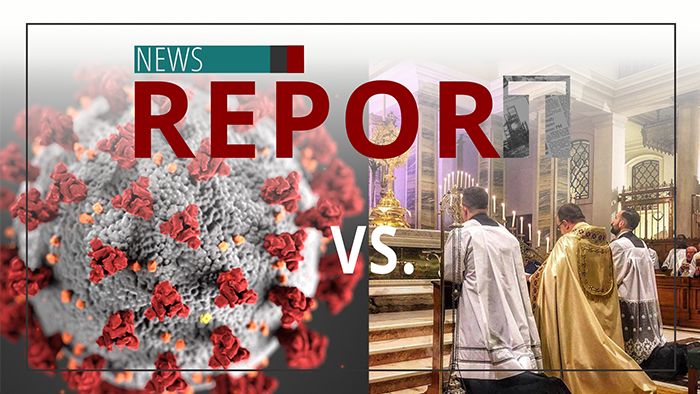