There is only ONE personal relationship with Jesus Christ that counts.

A couple of weeks back, the archdiocese of Detroit sent out a small army of chancery personnel to scour parishes and ask questions of Catholics in preparation for a local synod to be held later this year. A question that kept being asked was "Have you had a personal encounter with Jesus Christ?"

What a stupid question — stupid, but to be expected. It's right up there with "Mary, Did You Know?"

In the constant race to ruin the Church, ignore Her teachings and undermine Her true character, confused and wicked prelates are doing everything and are on a mad dash to de-Catholicize the Church.

They've been at this for years — decades, really — and have loads of momentum on their side. This is why their efforts must be resisted at every turn possible.

A recent development is the rising chatter about having a "personal encounter," "a personal relationship" with Jesus Christ.

Shut up with this already. This is Protestantism-inspired theo-babble that doesn't mean anything — anything, that is, other than to distort the objective truth that Catholics in a state of grace have much more than a personal relationship with Jesus Christ. They are living temples of the Holy Trinity — the most personal relationship that can be had.

But this is all a Church of Nice con job by theological snake oil-selling bishops and their staffs who want to replace objective truth with subjective emotion in their all push to topple Catholic truth, tradition and teaching.

The new buzzword in the Church of Nice these days is to have a "personal encounter." We heard it ad nauseam at each of the synods in Rome. This past October, as homosexualist cardinal of Washington, D.C. Donald Wuerl couldn't stop repeating, we need a new vocabulary; the Synod was a "language event."

One of the freshly minted phrases of our new worldwide "language event," therefore, has been deemed to be "personal encounter" — a "personal relationship" with Jesus Christ. It's starting to be worked into lectures and homilies, tricking Catholics into believing that what matters when encountering the Divine is not conformity with it, but rather emotion about it.

The reason the homosexual collective which directs the Church of Nice wants this view to be held is because it eradicates dogma and doctrine. Teaching of the Magisterium relates to objective truth. Feelings has not a blessed thing to do with it. How we "feel" is meaningless — empty of meaning. What matters, all that matters, is what we know and how closely we conform to it.

Our Blessed Lord said, "If you love Me you will keep My commandments, and My Father and I will come to you and make Our home with you" (John 14:23).

Keeping the commandments is unrelated to feelings. The commandments deal with objective truth. Feeling a certain way is all about subjective opinion. The two have nothing to do with each other

That is not only wrong and for those weak in the mind, it is straight from the diabolical because it leads to rationalization of sin, which leads to Hell. But of course, the Church of Nice and its homosexual collective masters don't want any talk of Hell. They dismiss it by babbling on like a drunkard that we have a "reasonable hope that all men are saved." No, we don't.

All of these things — the near-total denial of damnation of human souls, the refusal to preach the hard teachings, the substitute theology of swapping objective truth for subjective feeling — all of these are just various parts of a larger whole. Weak, wicked or cowardly bishops have become so confused and disoriented themselves that many of them are no longer capable of transmitting the authentic Catholic faith.

They have some vague notion from their malformation in seminary that they are to transmit some kind of spiritual something that they blindly set down a path of modernist, spiritual theo-babble thinking they are being and doing truly good things. They and their predecessors have done such a horrible job of transmitting the Faith these past decades that they rightly perceive that to try and preach authentic Catholicism (as if they knew what that was) would frighten many people in the pews who are unaccustomed to hearing objective truth and morality preached from the pulpits.

Pewsitters have grown so accustomed each week to hearing homilies start with a joke or two, then move right into 10–15 minutes of warm and cuddly baby sputum, which then launches into a harangue about the need for illegal immigration or our carbon footprints needing to reduced, that if they heard that abortion is murder, cohabitation is evil, contraception is a grave sin, homosexual activity is intrinsically disordered and always evil, that their heads would pop off right there in Church.

It's like giving a starving man who hasn't eaten for weeks a steak dinner. His insides would revolt immediately. The problem is the homosexual-controlled Church of Nice never gets around to speaking the truth because they live lives in opposition to the truth and want others doing the same. They use the congregations to salve their own consciences; so they tell parishioners warm and fuzzy stories born from their own psychological need to be liked in order to get the parishioners to like them.

The whole parish experience is built around Fr. Smiley pleasing the people and the people really liking Fr. Smiley — and the truth of the Faith be damned in the process. This is the reason why all the talk about a "personal encounter," a "personal relationship" with Jesus Christ — because in that kind of world it is you who set the terms of the relationship, not Almighty God.

The Church of Nice answers back "No. All we want is to feel good with our evil, sinful choices rationalized because syrupy music is played at Mass and we get teary-eyed and hold hands during the 'Our Father' and don't discriminate anymore because we have girl altar boys and run around during the shake of peace with our soft selves waving at and shaking hands with everyone on two feet."

"We are all so loving and sweet and nice that our sins don't really matter. After all, I have a relationship with Jesus Christ, the terms of which I set and change according to how I feel."

That isn't Catholic. It's a narcissistic, diabolical supplanting of the nature of the relationship that Jesus Christ commands we have with Him. He says: "Eat My flesh." How much more personal can you get with someone other than eating them? This is why Our Divine Savior commands this, to consume Him, so that we become more like Him.

You keep His commandments, you go to confession regularly, you keep yourself in a state of grace, keep an active prayer life and devotional life, and walk up the aisle to kneel down and receive your King into your soul. That is the personal relationship with Jesus Christ, the only one necessary or capable of being had. That's why He commanded it be done that way.

He knows the best way to have a personal relationship with Him. He's God, not errant clergy. 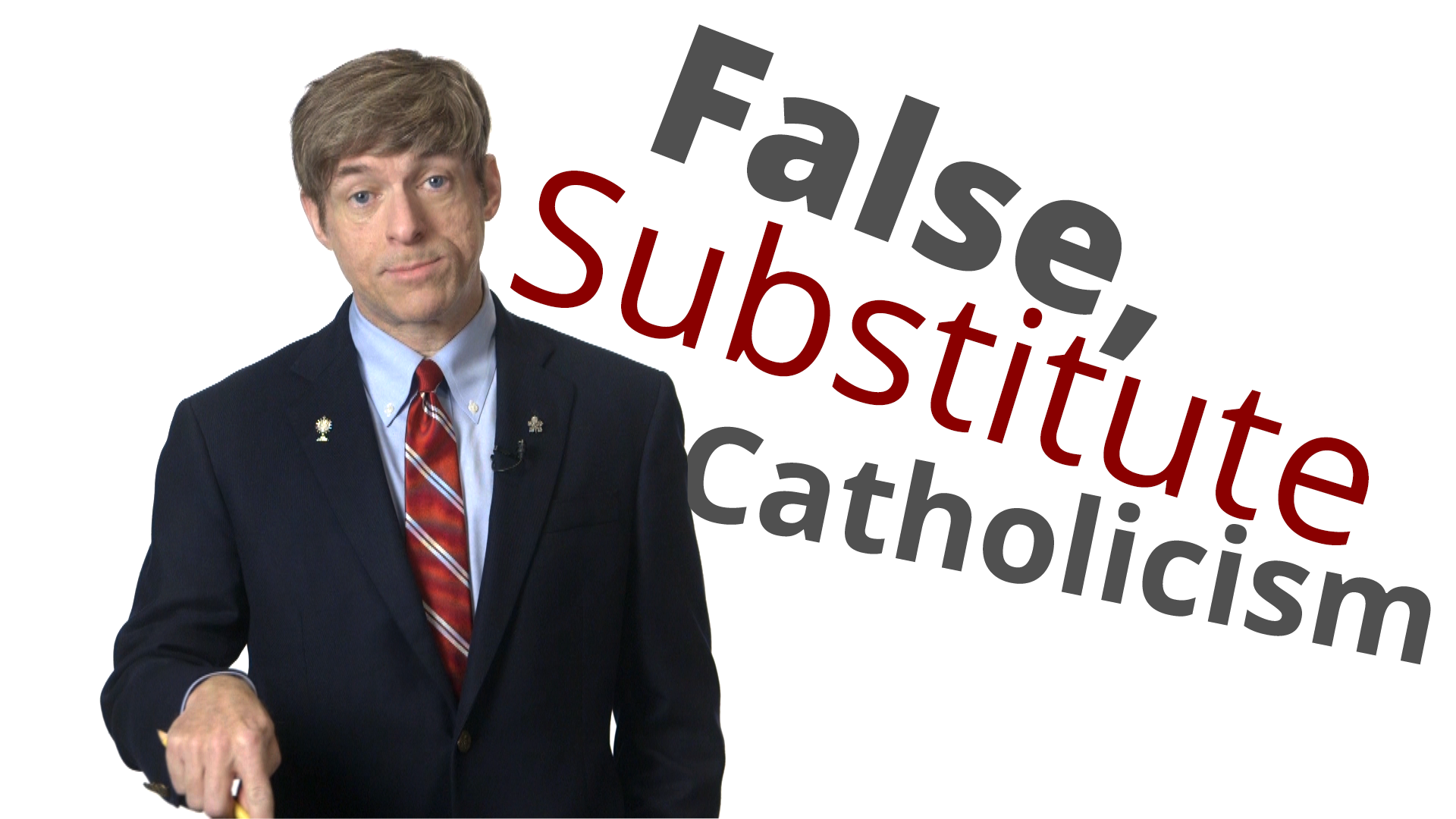 False, Substitute Catholicism
The bishops building a fake Catholic Church will be damned.