Has he caught on to something?

Last week, it was revealed from a very reliable Italian journalist, Sandro Magister, that, while Pope Francis was in a private meeting with Italian bishops, he lamented to them, "We are full of homosexuals."

That is a shocking report, which of course has garnered very little attention outside of a select group of Italian media. Consider it again: "We are full of homosexuals."

Pope Francis — his comments came behind closed doors as he was essentially scolding the assembled Italian bishops for their coddling of homosexual clergy. A good chunk of the U.S. bishops better hope he doesn't return to the United States because that would be a little awkward.

Of course, one comment does not an earthquake make, but there are indications that Francis is becoming more aware and angry over the flood of homosexuals overflowing the ranks of the clergy.

Consider the constant flow of stories about gay-themed things in the Church, like the nativity display this past Christmas in St. Peter's Square, to various high-ranking Vatican officials, like Abp. Paglia to Cdl. Coccopalmerio, to his own close confidante Cdl. Maradiaga — who many have nicknamed the "vice pope" and who is facing accusations of covering up for a gay bishop friend back in Honduras who is reported to have stolen millions from Church funds to spend on his, you got it, gay lifestyle.

There are stories emerging like this nearly every day and they are not just sins of weakness. They are indicative of a systemic problem of homosexuality in the Church's ordained class which is undermining the Church at every turn. Even the not-surprising news last week that American Cdl. Theodore McCarrick has been sidelined by the Pope personally while charges that he raped a male minor in New York more than 45 years ago are investigated.

A few days back, an Italian abbot complained publicly in writing that the clergy was infested with homosexuals. Stories like this just keep rolling out, and it appears as though the gay news overload is finally getting to the Pope. He recently said publicly, departing from his prepared comments, that gays should not be admitted to seminary. So much for "Who am I to judge?"

It's worth speculating if some sea change has, or is beginning to occur, with the Holy Father on this issue. Consider, he has now lamented to a large group of bishops that the Church is full of homosexuals, publicly stated in St. Peter's Square that gays should not be ordained, has said previously that same-sex marriage is demonic.

Nonetheless, it was a widely reported scandal that happened in a Vatican-owned apartment building essentially right under the nose of the Pope, and if the reports are to be believed, he was not pleased.

There was the horrible scandal of the young man who was abused by a priest, which was later covered up by a Chilean bishop who Francis publicly put his confidence in, even leveling accusations against the victim. A few days later, as the facts of homosexual predation and cover-up among the Chilean bishops became public, Francis had to eat his words — and apologize — eventually meeting with the entire group of Chilean bishops and reading them the riot act.

So what we have shaping up at the moment is a bit of mystery. The Pope has spoken in terms of "acceptance" for gays, while at the same time, and increasingly, going on the record denouncing the practice of homosexuality. There's no doubt that, on this issue, he has walked a very tight rope, but it may be that his patience has or is wearing thin, as some of those who surround and advise him seem to not be serving him well.

Given his public affirmations of Church teaching with regard to homosexuality, coupled with his lamentations over the state of the clergy overflowing with gay men, it seems that various homosexualists around him might have tried to use him and advance the agenda by talking about mercy and tolerance and so forth, and thereby, at least thinking to themselves they were slowly drawing the Pope into their camp.

If that is or ever was the case, it seems like the jig is now up as the expected scandals that always accompany the homosexual life have apparently become too much for the Holy Father. Could it be that an old dog has suddenly learned a new trick, or as my own father said, "You're never too old to learn something new."

The Pope may just be learning something new. 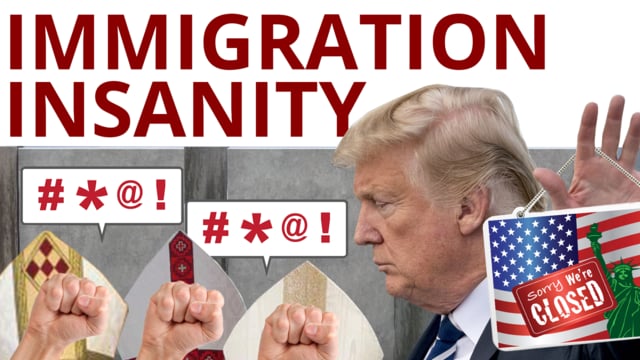 Immigration Insanity
It's a smokescreen for worldly bishops.