Sometimes, oftentimes, it takes a good amount of time to see the fruits of our labors come into existence. We plant, we sow, and only in season do we begin to reap what we have sown. This is true with good seed and bad seed.

In the 1960s and forward, a lot of bad seed was planted in the Church, mostly by clergy, watered by agenda-driven laity — and now it is all coming to fruit — horrible, rotten, putrid fruit.

Take, for example, the GOP debate last Thursday night. In the two separate sessions, seven different Catholics stood on stage fielding various questions. Then came the inevitable — because it is timely — question of same-sex "marriage" and Ohio governor and Catholic John Kasich gave the following response: "I'm an old-fashioned guy and I see things old-fashioned. I believe marriage is between one man and one woman."

Okay, first problem: "Old-fashioned" — the term means that morality is based around fashions, time constructs, as emphasized and underscored by his use of the world "old."

Wrong, Governor. That line of thinking alone would disqualify you from ever getting my vote. You can't reason to truth. I don't care how pro-life you are. One way or the other you will collapse and fail when you are most heavily relied on. The truth of marriage isn't based on either time or longevity. It's based on truth — a truth you do not recognize.

Then he admitted he went to the wedding of a friend who happens to be gay: "Just because someone doesn't think like I do doesn't mean I don't love them. I'm going to love them no matter what they do. God loves them unconditionally, and so do I."

The idiocy and complete lack of correspondence to objective truth contained in his statement is appalling. He has no true concept of God or love. It is purely arbitrary. He was raised Catholic, but being in the age range where the betrayal of Catholic clergy was reaching great heights, Kasich drifted away from the truth.

That isn't terribly surprising. It happened to tens of millions of Catholics who had no firm grounding in the Faith coupled with a glut of evil, wicked, self-interested clergy who had no concern for their vows, promises or souls. Kasich has become one of those one in 10 Americans who is now an ex-Catholic — 34 million of them.

But what of now, the current conditions on the ground? Pay close attention, you Church-of-Nice dreamers, who imagine things are not as bad as they were "back then," that they have improved miraculously, that truth has been embraced without any repentance or recognition of past sin and requisite need for repentance and sorrow. Listen to what what New York Cardinal Timothy Dolan golden boy Fr. Jonathan Morris had to say on Fox and Friends on Sunday morning when the topic of Kasich's response came up as a discussion point.

"I thought it was brave of him. He knows not everyone is going to like his response. It’s a real issue what you have to say — what does my faith tell me to do in some situation. Other people wouldn’t have gone to the wedding. He looked at it very seriously and decided this is what his faith told him to do. I congratulate him for it."

Won't someone rid us of this troublesome priest?

What a pathetic response to this ugly situation. A fallen-away Catholic endorsing a sodomite marriage gets congratulations from a Catholic priest for his "bravery." Shouldn't be surprising considering his boss sat on national television himself and declared "Bravo!" for a professed active homosexual, NFL-wannabe Michael Sam.

Fr. Morris couldn’t be more un-Catholic in his response or even less human. First of all, on the mere natural level, how is what Kasich said brave? Please, Father — have you been watching the news, reading anything, looking at anything else besides the mirror? Coming out in favor of sex between two men is anything but brave. Practically the whole world supports it, as evidenced by the thunderous applause which broke out among Republican supporters when Kasich said what he said.

"He decided this is what his faith told him to do."

Stop. Stop. Please, Fr. Morris, just turn in your collar. No way in Hades would your Catholic faith — the same faith which teaches this activity is evil and immoral — no way would it tell you to go to such a "wedding" — especially when the rationale stated by Kasich was that God loves everyone unconditionally. That is not what is meant by love, God or unconditional.

Father Morris, sitting on national television, talking to millions, had the perfect opportunity here to teach, to preach truth, to gently, kindly explain why what Kasich said was wrong. But nope! In true Church of Nice "Everyone, look at me being politically correct, never giving offense!" claptrap, he whiffed and chose the popular route instead.

If you love Me, you will keep My commandments.

Our response — the only permissible response to God's unconditional love — is unconditional obedience. Absent that, you go to Hell. This is the only permissible point for a priest of the Catholic Church to make. But for the umpteen-millionth time in the last month, yet another Catholic cleric refuses to announce the truth when given the opportunity and places his own soul and the souls of others in eternal jeopardy.

Can we expect a clarification from his boss Cdl. Timothy Dolan? Ha! If you are expecting that from the man who not only led a group of militant gays in the St. Patrick's Day parade but publicly cheered and supported the decision, as they say in New York, fuhgeddaboutit.

Men like Cdl. Dolan, Fr. Morris and countless others have been badly formed in the Faith — and yes, cardinals and bishops can be badly formed just like Pope Benedict said they could. Being a priest or bishop is no guarantee of having supernatural faith or making correct moral choices or statements. The collar or mitre is no safeguard against eternal perdition. In fact, in many ways it is a surer way to condemnation owing to the great responsibility and authority such a man is given. There is almost no margin for error.

We are seeing an almost never-ending stream of the bad fruits in the clergy of the past 50 years or so evidenced in the laity. It is without a doubt something that the clergy will be judged severely for as we hear confirmed for us in the Scriptures. God help those ones.

But to see these errors in the laity continued to be upheld and supported and applauded, congratulated even today in the ranks of the clergy, is beyond wicked. It is a sin which consists primarily in supporting the sin instead of correcting it. It is in the end a sin against the Holy Spirit.

Whatever evil was manifest 30, 40, 50 years ago in those clerics is still going strong today. From Bishop-Elect Barron's wicked "No one really goes to Hell" implication to Fr. Morris' supporting of error in cheering a fallen-away Catholic's misguided immoral decision to attend a gay wedding, the list continues to grow of villainous clergy who will have laid waste attempts to re-energize the Church in Her most critical hour.

These abominations must be challenged, exposed and confronted. 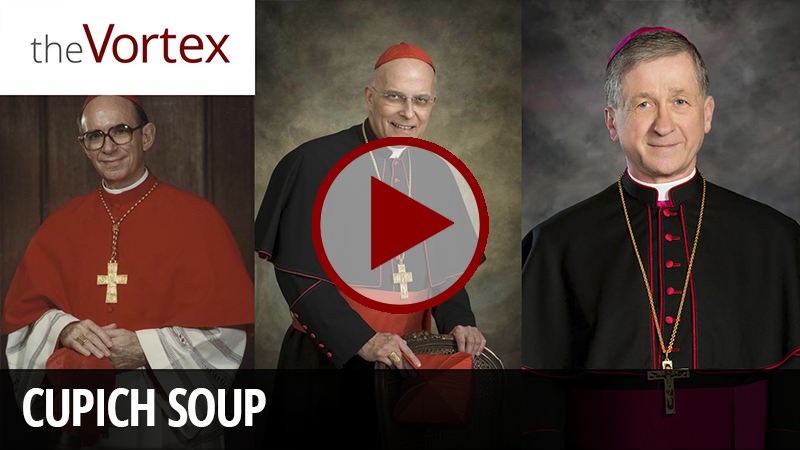