This message is for everyone who is of good heart and sincerely seeking the truth,  whether you are Protestant or just a wishy-washy Catholic: Get on board the Barque of Peter now, while there is still time.

The Barque of Peter is an expression for the Holy Catholic Church established by Our Blessed Lord on St. Peter. It should be very clear — blindingly so to anyone who has eyes to see — the malfeasance brought about 500 years ago by Martin Luther, a failed Catholic priest, has wrought disaster for the world. The so-called Protestant Reformation was not a reforming of anything, but a malforming of the One True Faith. That is why the United States has now followed through to its logical end and constitutionally baptized sodomy.

No self-professed Christian can hold this as true or acceptable. But the rejection of the authority of the Catholic Church in Her moral teachings has made this all possible. When Luther rejected the authority of the Church and declared that followers of Christ only need grace, only need Scripture, he broke from 1500 years — 15 centuries; think about that — one thousand five hundred years — of how all Christians up to that point had lived.

What he declared, in effect, was that each man became his own pope, his own Peter — that man himself became the authority and no longer the Church established by Almighty God to guide and shepherd souls to Heaven. This spun off to other arenas of life: first philosophy and eventually politics. If man could decide things of God for himself, then certainly he could decide things of human life and affairs of state for himself. If you are willing to assault the heavenly Kingdom, what on earth would hold you back from assaulting any earthly kingdom?

And assault is exactly what the children of the theological revolutionaries did. They attacked long-held philosophical notions that God is the Creator and man the creature. After that premise became accepted in political circles, it was just a given that nations could decide for themselves the rightness and wrongness of this moral act or that moral deed.

What happened last week at the Supreme Court is the effect of Martin Luther's revolt against the authority of God and the Church. Having wrested that authority away from the Church, it has now been delivered into the hands of the State, who will use that authority to attack the Church — as the State has always done.

Because that is the world we are in, and it's only going to get worse, and the only safety from it — from the destruction of your children’s souls, not to mention your own — is the sacramental life of the Catholic Church.

The Church is like this great ship in the middle of an expansive ocean whipped on all sides by great winds and storms — just like Our Blessed Lord in the boat with His apostles. Outside that ship there is only death, drowning, being dragged under the waves. If you do not get on board now, you will have very little time before the storm crashes on you and you are lost.

Catholics, you must preach this message, clearly and loudly. Save yourselves and everyone you can, and you must start now. There is only a little time left. 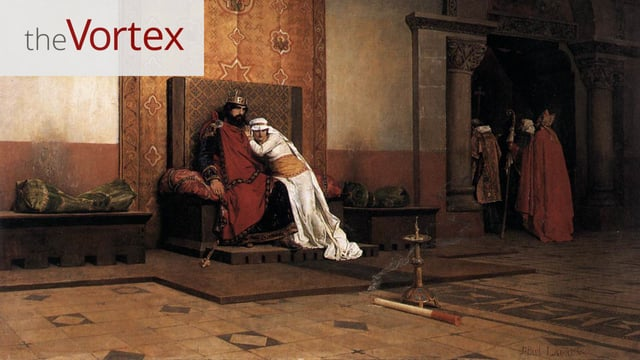 The Vortex—Excommunicate Them, All of Them!