Hell of a Synod

As we pore over the reams of video and news articles and headlines and radio interviews and web postings and social media blasts and tweets and every other imaginable source of information, one thing is very apparent: There is very little discussion of Hell and people going there. When people like Cdl. Donald Wuerl of Washington, D.C., for example, grant an interview and say something like "everything is off to a fabulous start," that depends on whom you ask — because there are really two camps, ideologically speaking here, with smaller subsets within each camp. There is the supernatural camp and the natural camp. And they couldn't be farther apart in their ideologies.

Ah, but for the natural camp, the priority is something totally and completely different. That's because they don't really believe in Hell, or don't really believe anyone goes there except for serial killers (maybe) and traditional-minded Catholics (for certain). And if anyone doubts that claim about their lack of belief in Hell or people really going there, we need only refer you back to our encounter last year with papal spokesman Fr. Thomas Rosica, who told me that to my face. When I said in a discussion with him after a press briefing that people who die in mortal sin go to Hell, he said point blank, "Michael, the Church doesn't teach that."

For the naturalists this is all about how to make the Church relevant to contemporary man. They are the quintessential sell-outs: those who have spent decades trying to re-form the Church and drain it of its supernatural quality. To accomplish this, they keep a close track of the world's pulse and are constantly shifting language and vocabulary around to make themselves and their Church sound "with it."

And yes, we do mean their Church — because these men are about as Catholic as Judas was. They talk in syrupy sound bites and convoluted, nonsensical phrases, but at the end of the day have no more concern for souls than the man in the moon. They have lost the Faith, and so, being professional Churchmen, they need to invent a new mission for their New Church. They spew heresy disguised as politically correct language aimed at "inclusion" and "welcoming" but are sinister in their approach.

Things have reached a bit of an impasse at the Synod, as many of the bishops are now saying publicly. The impasse is over how to speak to an indifferent world the truths of Christ in such a way as not to water down the doctrine. Even the press corps in the press briefing room has now popped that question at least twice, sensing the impossibility of trying to have your cake and eat it, too. Both Canadian archbishop Paul Andre Durocher in the naturalist camp as well as Philadelphia archbishop Charles Chaput admitted to the difficulty of trying to square this circle.

The real underlying tension is the one present in the Church at large, so it shouldn't be surprising that it has found its way into this Synod. It is the issue of being "offensive." It is the one thing that you cannot be in the Church today, under any circumstances. If you say anything that causes offense, you are shown the door immediately. John the Baptist would have a difficult time in such circumstances, not to mention, oh, say, Jesus Christ, of whom St. Mark records for us "they took offense at Him."

For 50 years now Church leaders have increasingly danced to this tune — that the teachings must be said in a way that can be "accepted" by the world. They have forgotten that the "world" is the enemy of the Church. If the world is liking what it's hearing coming from the Church, then there's something wrong with what's coming from the Church. That's why all the original bishops — of whom these men at this Synod are the successors — were almost all martyred, something the current officeholders seem to fail to grasp.

No one is advocating to go out and try to be offensive by calling people names. But if you are a bishop, and you fail to make the point very clearly, with no if, ands, or buts about it that what's at stake here is the eternal destiny of mankind, then you will be damned. What is so hard about sticking in one paragraph into the final document, preferably right at the top, something like:

Out of a love for the souls of men, we bishops gathered together here in the Synod with the successor of St. Peter declare our sacred charge is the salvation of souls. To that end, we must inform the world of the Cross and its accompanying suffering here on earth, but its eternal reward unto life everlasting.

Owing to this, we can in no way even consider sacrilegious reception of Holy Communion, condoning or even the appearance of condoning homosexual unions.”

Our first charge as the successor of the Apostles is to preach what they preached, and our concern is your salvation in the next life.

See, simple lay Catholics are at a loss to understand why that kind of simple declarative, inclusive language cannot be used. Can't get much more "inclusive" than "we want everyone to go to Heaven and no one to go to Hell because that's what God wants." Have these men forgotten what they learned as little boys about Heaven, Hell, the devil? Have they forgotten the four last things: Death, Judgement, Heaven, Hell? Have they no fear of God? If they go home from this Synod leaving doubt in the minds of the faithful, not to mention those looking at the Church, and those people fall further into sin, they will have an eternal price to pay. It's not their Church, even though the naturalist bishops believe it is.

We will see in the coming weeks if a John Fisher or John the Baptist steps forward. If not, may God have mercy on the souls of these bishops. 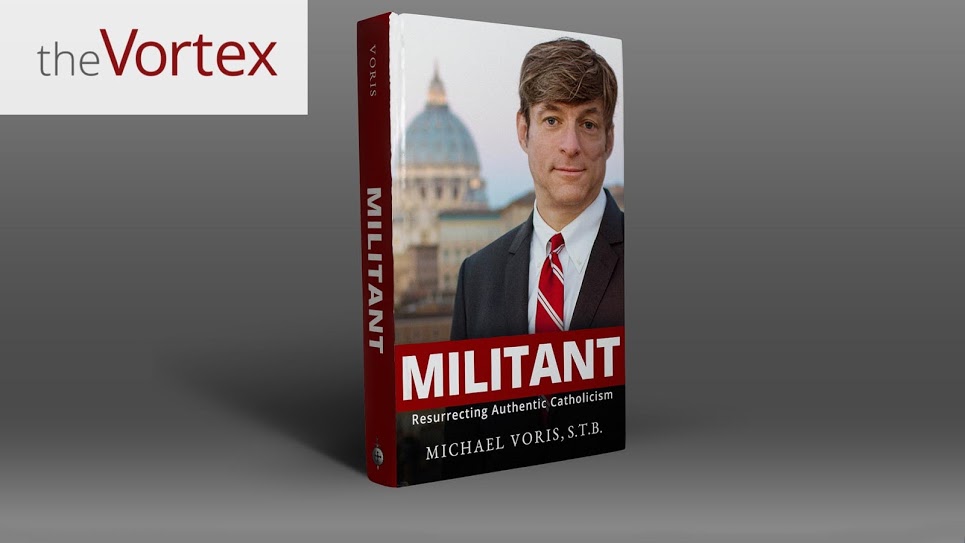 Special Sunday Vortex—Militant
That's why I've written my first book titled Militant. Many Catholics today fail to appreciate the power of the Church to crush evil underfoot. This is the mystical body of Christ, the Bride of Christ, imbued with heavenly powers to wage supernatural war against the ancient enemy.