The Vortex—“We” Win in the End

If you haven't noticed, there is a general feeling of malaise going around the Catholic Internet these days, brought on and exacerbated by the U.S. Supreme Court's tragic decision making sodomy "marriage" a constitutional right.

However, there is something of a counterbalance to the malaise also going around. It's the phrase "We know who wins in the end" — or its close companion "We win in the end."

While that is true as it stands, it is has the potential to inspire many to non-action. It gives cover to those who don't really want to do anything because they are paralyzed by fear, or cowardice, or have just run out of gas.

Allow Church Militant to submit to you that this is a very dangerous attitude. It is also presumptuous. First, anything that excuses fear, coddles exhaustion, or vents righteous anger away from its justified target is bad. Second, it is presumptuous in that the person saying it can potentially assume that he is included in the "we" of "We win in the end."

Not so fast there. Our Lord and His Spotless Bride do win in the end — have already won, in fact. But who is this "we" you speak of? A person is only incorporated into the Church Triumphant to the extent that he or she has been an active member of the Church Militant. No Catholic can think the battle is just some passing thing, not really affecting them, and they can just wait for the reinforcements to come over the hill while they essentially "sit this one out."

We must, like the Enemy has done and still does, get up every day and crawl out of bed every day with the mindset that "Today, you die." We must charge the gates of Hell and overrun them. This means we must confront the evil and pay the price for battling it. We need the attitude that we come back looking like we have been in all-out war, and when asked about our fight, answer back, "If you think I look beat up bad, you should see the other guy."

All will be required to give their all, live a life that they never expected, sacrifice all kinds of things in the struggle, end relationships they never saw ending. This is a fight to the death, and this is the point too many — even faithful Catholics — are failing to grasp at this critical moment. Our Catholic lives must change — forever — because the world has changed — forever. And to the specific point: The world has changed forever because too few Catholics had changed forever.

It is totally insufficient to sit back and adopt the attitude: "We know how this ends; we win." It's almost a safe bet that many who take comfort in that saying will surely not be among the "we" they speak of. That "we" is reserved for those in the Church Militant who earn the privilege afforded by Heaven to join the ranks of the Church Triumphant.

We do know who wins in the end; we just need to make sure that we are included in the "we." 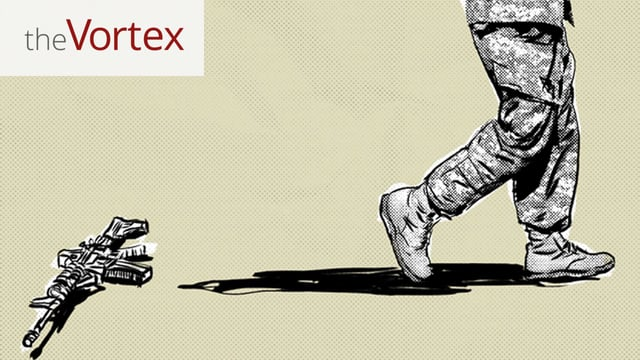 The Vortex—The End Is Near