In yesterday's Vortex we spoke briefly about the influence of Fr. John Courtney Murray on the Church in the 1950s and 1960s. While he is not a household name, don't let that deceive you.

First, he appeared on the cover of TIME Magazine in December of 1960, so this priest was no lightweight. The big vexing question back then was "Can Catholics also be good Americans?" The reason this question was so hotly debated was because underneath daily life was the understanding that there were things in the daily life of the country that Catholics could not square with their Catholicism.

In the 1950s, many of the more pressing questions we see now, like abortion, contraception, same-sex so-called marriage, had not yet emerged, but the potential for conflict was already foreseen by cultural elites and clergy like Fr. Murray. The cultural elites, like the Rockefellers, for example, have a worldview which is in direct conflict with Catholic truth. The elites wanted to change the culture, turning it away from its Christian foundations, and were greatly concerned that the Catholic Church would pose a huge obstacle to their plans. The backdrop of the Cold War of the 1950s provided an unparallelled opportunity for them to move the needle.

Recall, this was the Cold War era: America vs. the Communist Soviet Union. The CIA was involved in all kinds of programs aimed at getting Americans to accept the general philosophical system of the United States as being good, if not the ideal, in all aspects of life: social, economic, political. So men like Henry Luce of TIME Magazine, with his close private ties to the CIA, forged alliances with various religious men, most especially Fr. Murray, to help in this endeavor.

TIME Magazine became essentially a propaganda machine, a driving cultural force in this movement. And the relationship between Luce and Fr. Murray catapulted Fr. Murray onto the national stage. He became the waterboy for Team USA, the head cheerleader for All Things American. There were many Catholics opposed to his view, but they did not have the pulpit of the most prestigious, influential publication of the day backing them.

In buying into the "All Things American Are Good" proposition, Fr. Murray brought into the Catholic consciousness many things that were certainly American, but definitely not Catholic. This is why the question of "Could a Catholic also be a good American?" had to be brought up. At the end of the day, Murray and his crowd of CIA operatives and TIME Magazine won the day, helping American Catholics buy into the proposition of the separation of Church and State and calling it "religious liberty."

With the help of Fr. Murray, American Catholics became less Catholic and more American, to the point that today, in the time span of less than 60 years, people baptized as Catholics in America are indistinguishable from their Protestant or agnostic countrymen. In the great battle of allegiance to country or allegiance to state, the state won, backed by CIA operations aimed at achieving this very end. The Cold War merely served as a convenient excuse to convince American Catholics that country was more important than Church. It was the American Way that needed to win out over the Church.

And behind that multi-pronged CIA operation were the cultural elites, who controlled the U.S. government and its vast resources, who were able to use a priest to help seduce Catholics into accepting the American Dream in exchange for their faith. Popes had earlier warned that the notion of separation of Church and State was evil and never to be accepted by Catholics as a legitimate political option. Looking at the results of the widespread acceptance of it by Catholics, now we know why the Popes were so opposed. 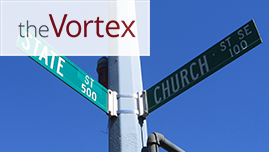 The Vortex—Separation of Church and State