The ruling class of the Church continues to run the Church like a corporation. And we use the term "ruling class" intentionally, because there is something akin to class warfare going on.

And let's be clear here. We aren't talking about anything even closely related to dogma, doctrine or teaching — that, of course, is in the purview of the bishops, their obligation and duty before Almighty God. No. What we are talking about is this continual, persistent effort to treat many of the faithful as though they are peasants who should be dismissed out of hand when they raise concerns, objections or even protests about the way business is conducted. And this superior attitude is not held by just some of the bishops and their staffs, but also by those who hobnob with them. For these people, it's like a whole new kind of clericalism — the clericalism of the laity.

But it's the combination of both clericalist clerics and clericalist laymen that comprise the ruling class, the ones who look down their noses at the peasantry. From Washington, D.C.'s Cdl. Donald Wuerl — who connives behind the backs of faithful clerics, like His Eminence Cdl. Raymond Burke, to destroy those he considers his enemies because they actually accept the Faith instead of trying to demolish it — to others like Bill Donohue of the Catholic League, who has an extensive history of coming to the aid of any cleric no matter the wrongdoing.

Donohue actually said Catholics should not be talking about such cases as former archbishop of Milwaukee Rembert Weakland, whose homosexual affair got him blackmailed for a half million dollars before finally being exposed.

Then there are the Catholic bloggers who seem to have made careers out of defending and promoting now-Bishop Robert Barron and his undying support of the whackjob idea that we have a "reasonable hope" that all men are saved. Bishop Barron recently added to his growing litany of strange utterances when he gave an interview to EWTN, where he said that the Catholic response to the Parisian ISIS terrorist attacks should be one of non-violence.

Really? That's the solution offered with barely a perceptible hint of condemnation for the actual attacks themselves?

Chicago archbishop Blase Cupich last month dropped the bomb that Catholics living in adultery should decide according to their own consciences if they should approach for Holy Communion — and not a peep from Donahue or the Catholic League, because Cupich is ensconced as part of the ruling class.

A few days back there was a massive rally of teens in Indianapolis at Lucas Field where, gathering for catechesis and so forth, they were treated to more Event Catholicism, complete with the usual loud bands, light show and appeal to all things "cool." They were even treated to a talk and video from Catholic Relief Services head Carolyn Woo, who is traveling the country constantly painting a positive picture of CRS, despite its regular participation in Third-World contraception programs.

Now efforts are underway in various dioceses under the guise of the New Evangelization to marry together traditional Catholic beliefs and devotions, like eucharistic adoration, with jazzy, large-scale events incorporating bands, light shows and lots of emotion — staples from the heretical world of Protestantism, one priest even going so far as to say we have the winning combination here: traditional Catholicism and Protestant expression of praise and worship.

Then there is the move in catechesis to the horrible program called Alpha, which many parishes and dioceses around the country have now woven into their Catholic educational material — nevermind that Alpha was developed by a non-Catholic who believes that all religions in general are the same and that within Christianity, not much really separates Catholicism from those who follow the Protestant heresy. But of course he would believe that. The program is so theologically deficient that various dioceses and parishes actually had to develop a kind of Catholic appendix to it — so why are you using it to begin with?

On the social/political front, Catholic, Inc. has determined and instituted the policy of downtalking the "hard teachings" area and playing up issues like illegal immigration — as in: If you express any concerns about Obama's open-door policy of accepting anyone into the country, then you are a racist and, worst of all, a not-good Catholic because you are "mean and selfish."

And understand, my fellow Catholics — all of these things and many more are being orchestrated by the establishment, the ruling class of the Church these days, who accept this nonsense as the new way of doing business: Try friendly approaches that don't upset people and play to the emotions; always play to the emotions. Catholic Inc.'s board of directors has determined that all of this will be the company policy moving forward.

If it sounds too Catholic, it is to be ignored, downplayed or uprooted. Can't have too much overt Catholicism on display; people are put off, left feeling bad or uncomfortable, and we can never have that. It's all smile around Catholic, Inc. these days, not to mention making a lot of money for the ruling class. Bill Donohue of the Catholic League collects almost half a million a year — almost $500,000. Carolyn Woo is in catch-up mode; poor thing only pulls down $400,000 a year. Who says you can't get rich fighting poverty?

Various other "personalities" who are well entrenched as members of the ruling class are cashing in as well. Even high-ranking prelates like D.C.'s Cardinal Wuerl enjoy the high life. He lives in a top floor apartment in one of America's wealthiest neighborhoods — Embassy Row — as his supporters in left-leaning Catholic media circles keep the narrative going about how Wuerl's enemies live in luxury, without ever mentioning a word about the lifetime of luxurious living and jet-setting that Wuerl maintains.

This is all bad enough, but what makes it even worse is that this establishment, ruling-class approach to fixing things in the Church has failed spectacularly. As the Church somewhat lurched out of its out-and-out modernist approach to things, it didn't sway back to traditional beliefs with traditional expressions of those beliefs. Rather, Catholic, Inc. leaders devised what they thought would be a sure-fire strategy of cobbling together a little of this and a little of that — some Catholicism, some Protty, feel-good stuff, great, big corporate events to make attendees feel good about belonging to a much larger crowd and so forth,

But you don't get to take pure Catholicism and mix in a little lack of piety, a spoonful or two of Catholic rock bands, a dash of laser lighting and actually think you have come up with a successful strategy approved by the board of directors for rebranding the Faith so people will take another fresh look. The ruling class has failed; the establishment effort at all of this has devastated the Faith down here where the peasants live: enormous salaries being collected while parishes are being closed; hip and cool rock band Masses and 20,000-person events when the data keeps pouring in that Catholic youth care less and less about the Church.

Catholic, Inc. never ceases to paint a rosy picture of things. They have each gotten the memo, but the stupid strategy is failing, as all stupid strategies eventually do. And the reason is the Church's main mission — to be the prophetic voice in the drama of salvation history — has been silenced and abandoned by direct decree from the ruling class.

Why is this the case? Because giant sums of government money can't be funneled to left-wing Catholic social justice programs if you are prophetic; because the fear is real that if you preach the reality of the day — that souls are being damned — that your donations will dry up. Donohue's Catholic League, for example, is sitting atop an investment nest egg of $35,000,000 and has people wondering what exactly does this branch of Catholic, Inc. do with that money — because each year it just grows and grows. Can't possibly spend $35,000,000 a year issuing press releases and blasting faithful Catholics who are sick and tired of the status quo.

The ruling class want peasant Catholics to simply shut up and not protest or object to anything so they can continue to curry favor and maintain their seat at the proverbial table of power. They are so much smarter than all us peasants. We don't understand the intricacies and nuances of dealing with civic leaders. We fail to appreciate the finer considerations of what would happen if the truth was just blurted out. Worldly respect; large financial portfolios; hobnobbing with powerful leaders and influencers — it's all so above us.

For all their sophistication and wisdom, Catholic, Inc. doesnt have one success to show for all their groveling. The establishment does not convert anyone, but rather is converted by them. Slowly, bit by bit, one small surrender after small accommodation after another, they lose their Catholic identity — the Knights of Columbus national headquarters, the St. Patrick's Day Parade, and on and on.

Withdraw your stock from Catholic, Inc. as fast as you can, fellow Catholics. It's a sinkhole, a bad investment, and you may lose more than just your earthly fortune. 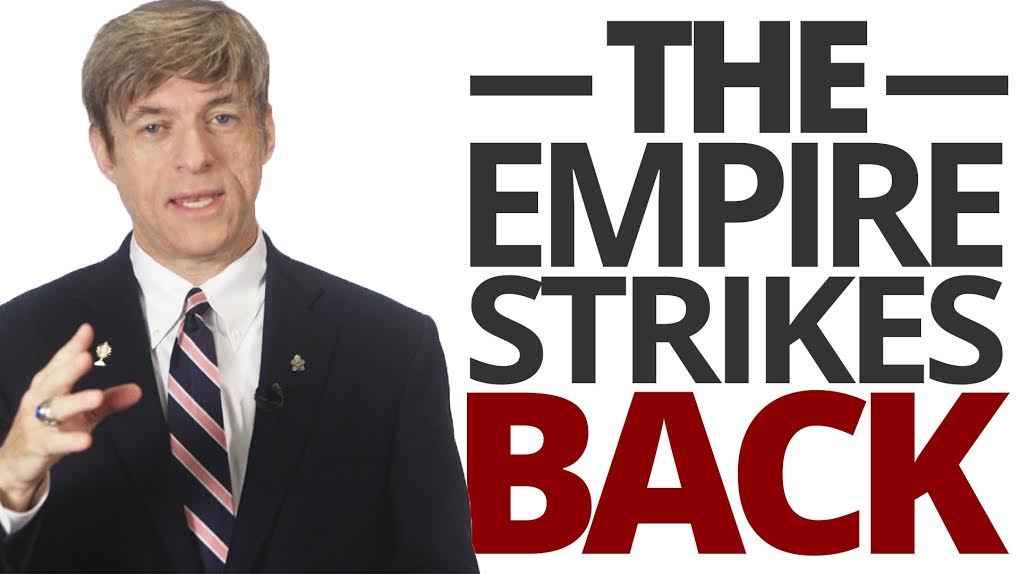 The Empire Strikes Back
Say the truth about the evil in the Church and wait for the fireworks.