You have to see this movie.

Part of the work of creating a Resistance movement within the Church these days includes defining what precisely needs to be resisted. And this is where it gets ugly. There is much worthy of resistance because, put simply, it's not Catholic; it only looks Catholic. In fact, shining the spotlight on all this so it can be driven out is the precise goal of the Resistance.

It's like locating and then removing a tumor. It's ugly work, but it has to be done. The spotlight has to be shone on all this — which is why the recently released movie called "Spotlight" is an absolute must-see. It's a very well shot, produced, acted movie focusing on the uncovering of the Boston homosexual priest sex abuse scandal, which was the epicenter of the entire scandal back in 2002. It follows along the investigative team from the Boston Globe newspaper as they learn bit by bit the sinister, sordid activity in which various senior clergy in the archdiocese of Boston were involved.

Make no mistake, that same spirit of evil, so omnipresent in institutional Church establishments, has not gone away because of the unearthing of the homosexual priest scandal. That expression of it has gone away for the most part, but the climate, the culture which allowed this to flourish until the press got their hands on it is still very much alive.

Think about it: An entire establishment, a ruling class, that conspired, threatened, bullied, intimidated and demeaned children and their parents into silence. Where did those men go?

We aren't talking about the gay predators. We're talking about the men in collars, and mitres, hundreds and hundreds of them all over the country, in seminaries and chanceries and religious houses — the whole sordid network of them. Almost none of them has gone to jail. Not one of the bishops — of which there had to be dozens and dozens of them — ever went to jail. They weren't even arrested.

Where did all these men go? Where are they today? They are still sitting comfortably inside the fortress of the establishment Church, that's where. It's an entire network of men who can easily be manipulated by Satan — and they are. How can I say that? How can that charge be made so easily? Because their first love is not for souls but for the protection of the establishment fortress.

When I was a sophomore at Notre Dame, I met this establishment up close and personal, and believe me, there isn't a thing "nice" about the Church of Nice. Near the end of my sophomore year, I started receiving anonymous letters through campus mail. At first they were innocent enough. I thought that my roommates or other buds were goofing with me. But then they turned dark, laying out sexual fantasizing with me at the center of it all. I took all this to a priest on campus who advised me to wait out the storm for the rest of the semester since it was almost over. Nothing more happened — until summer school.

The priest I had gone to for counsel was away on vacation and sent me a letter admitting that he was the author of all the other letters and cards. I was 19. He was a priest. I was at Notre Dame, where I had wanted to go my entire life, even trying out to be leprechaun. Notre Dame was my world. The Church environment was my world. And this man, in whom I had confided my fears, turned out to be the very man who was the cause of it all.

On advice, I went to a high-ranking member of the religious community which runs Notre Dame to tell him everything. We met in Touchdown Jesus library at a desk on the eighth floor. I told him everything. He asked to see the the cards and notes and letters. I gave them over to him. He promised he would take care of everything.

Two weeks later, when I was at my job, mowing fairways on the ND Golf Course, campus security came to me and said my presence was required immediately at the dean of students office. I was escorted with grass clippings, sweat and all and brought into a conference room with a big board table, with the dean of students on one end and group of about four or five men in suits and ties huddled together on the other end. They were not introduced to me.

The dean had me sit down on his left and then began to discuss all I had told the priest in the library. He then, sitting right there, in that room, turned the story around on me and accused me of lying. He then brought in the priest who had written the letters to me. He sat at the dean's right hand directly across from me. The dean apologized to him for all of this and then asked him to read a testimony.

The priest, wearing his collar and black for the first time I had ever seen, began reading from a prepared statement accusing me of being a wild party guy, out of control, always embellishing stories and so forth, firing off accusations that I had a drinking problem and was untrustworthy. While I was no shrinking violet during my years at ND, and did party too often, there wasn't a shred of truth to the larger implications he was making.

I lunged across the table at him, but the size of the table prevented me from actually making contact — and, dare I say, lucky for him. Eventually I had to settle down and restrain myself, but then the priest was excused and again offered an apology for all he had been put through. The dean then turned to me and said I had suffered a lot and needed to go to psychological services or I would be kicked out.

It was then that I sprung on them that there was a witness to that confession letter, and the witness was a good friend whose father was the university provost. You could have heard a pin drop. I seized the moment and demanded that he, too, be dragged in off the golf course just as I was — and I wasn't moving from that seat until he was brought in.

Faced with no real choice, they brought him in. They questioned him in my presence. He confirmed everything because he had been with me on lunch break and in my presence when I opened the confession letter. I had handed it to him — in total shock; he had read it, the whole thing — likewise in total shock. He confirmed every bit of this in that board room, that August day back in 1981 — the day the scales fell from my eyes.

As the dean wrapped up the meeting, he told me they would be in touch with me. I never heard another word about the matter.

These sinister men hide behind the Church, hide in the Church, executing their plots and schemes to destroy anyone they need to who runs afoul of their ambitions, whether their ambitions are for theological poisoning, or power and money, or sex, or probably a few other agenda items. I wasn't sexually abused, but I was psychologically. I lost whatever innocence I had left that day on the second-floor board room of the dean of students.

The Church is busting at the seams with scoundrels and sinister men like this. They were willing to take a 19-year-old kid — who had never dreamed of anything else except going to Notre Dame — and, using the excuse of protecting the name of Notre Dame, expel him.

As I sat through the "Spotlight" movie, all these feelings came back to me. As I watched the retelling of all that evil unfold on the screen, as I heard audience members gasp, I was flooded with feelings of shame and rage at the same time — shame for the name of the Church, of Her beauty being hung out to dry by these loathsome, uncaring men, and rage that justice be done.

Today, what do we see in the Church: in some cases the same individual men, or those who were younger when all this was going on and who kept their mouths shut so they could protect a future career as a bishop. And these same men and their disciples today allow and promote spiritual abuse by allowing souls to be ruined with their sacrileges and blasphemies and subtle distortions of the Faith with half-baked catechetical programs and refusal to preach the hard truth and their willingness to commit adultery with the world.

As long as men like this hold this kind of power, no one is safe, either with regard to this world or the next, or both. They refuse to be transparent. They take responsibility for nothing. They own up to nothing. They are accountable to no one. They will never respond to any charge except when they answer it with lies and attacks against those blowing the whistle.

Allow me to close with the little-reported on fact that Pope Benedict actually expressed gratitude for secular reports exposing the crisis. He added while the press was hostile often in its reporting, the Church could not have been attacked as She had "had it not been for the evil in the Church."

Had it not been for the evil in the Church. That evil, motivated by something other than a love for souls, has not gone away. It has simply shifted strategies. The great evil — and it was great — inflicted on the bodies and psyches of so many innocent is eclipsed only by the greater evil inflicted on the souls of so many more. The spotlight needs to keep shining. 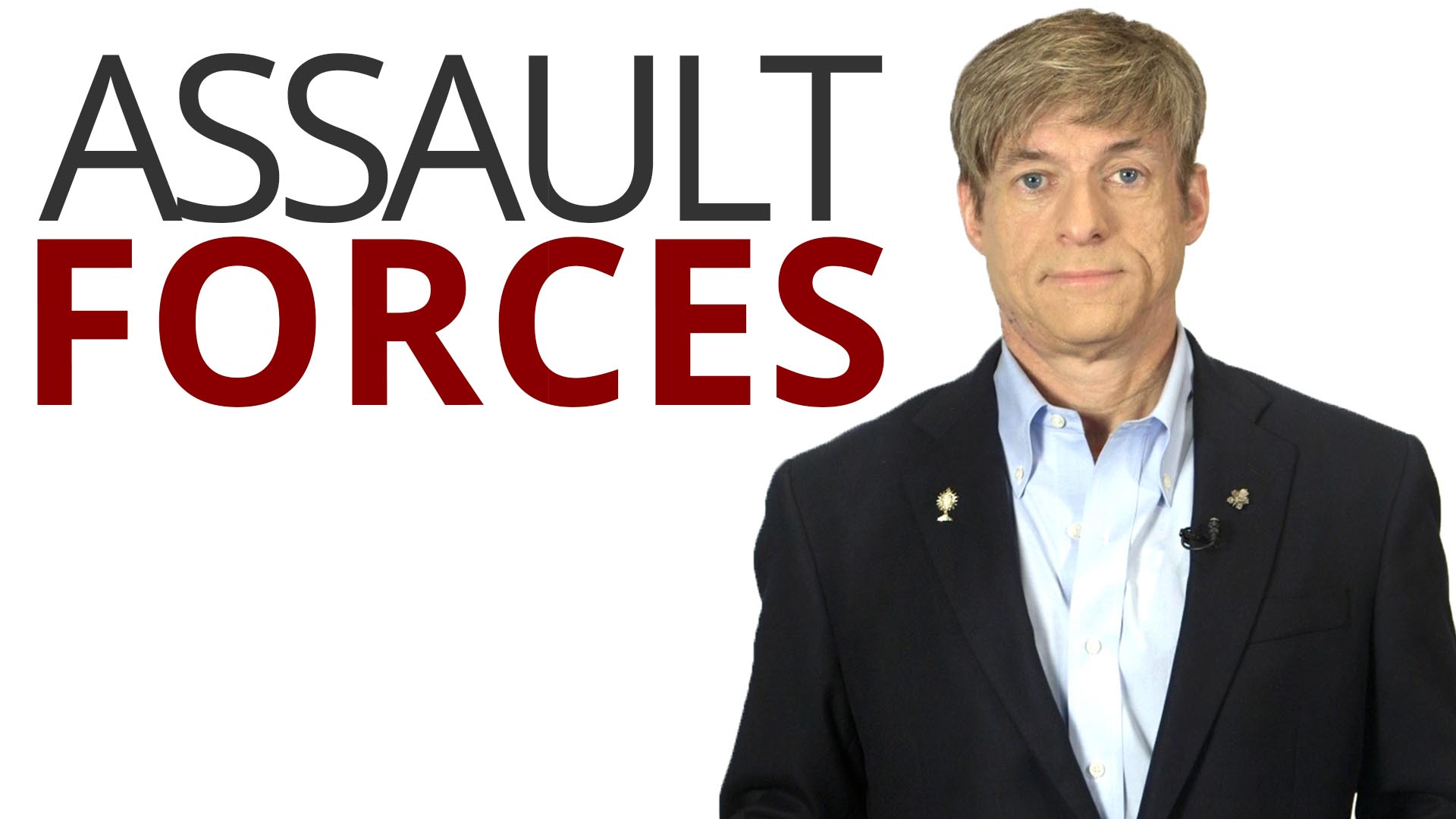 Assault Forces
The Church needs good men to die for the cause. Up for it?