Sheen was a Church Militant man.

In yesterday's "Vortex" we encouraged everyone to jump on this bandwagon and get New York cardinal Timothy Dolan to release the body of Ven. Bp. Fulton J. Sheen to his family so they can turn it over to his childhood diocese who is pushing the cause for his sainthood.

But they can't get anywhere as long as Dolan refuses to release the body. So we're asking you, if you have a Twitter account, tweet @CardinalDolan and @NY_Arch with the hashtag #DontBeMeanGiveBackSheen.

Let them know you are upset at this deplorable treatment of a future saint. If you don't tweet, then email the archdiocese or call them up. The information is down below.

This has now reached such heights of absurdity and insult and the like on the part of Cdl. Dolan and the archdiocese of New York that Sheen's nearest living relative has actually had to file a petition with the New York State Supreme Court to force the archdiocese to give back the body.

And yes, you heard that right.

Many people have all sorts of reasons for wanting Cdl. Dolan to stop playing games and holding up Sheen's canonization. And we here at Church Militant are among those crowds of millions. We have had a special devotion to Bp. Sheen almost from day one of this apostolate.

First, I served Mass on the celebration of America's bicentennial on July 4, 1976 when Sheen was the guest homilist at St. Mary's Cathedral in San Francisco, where we were living my freshman year of high school. The other altar boys and I got the chance to meet him personally and watched him with our own eyes go after a man who had come into the sacristy after Mass trying to get Sheen to accept a watered-down Catholicism. Sheen very loudly and directly let him know to get out. I saw it with my own eyes and so did my dad, who was in the sacristy doorway.

Sheen was a Church Militant man. Here at the apostolate, we pray for his canonization every day after evening prayer and that he grant a request in a particularly touchy situation. Our main studio is called the Ven. Abp. Fulton J. Sheen Studio. His classic book, "Life of Christ," is the first required reading of our PAUSE men for spiritual devotional reading.

And then there is this: the house cassock worn by Bp. Sheen while he was in Rome, which was donated to us out of the blue about two months ago. Inside the pocket, both his name and the year, 1953, are written on a label.

We picked Sheen to be a sort of patron and protector of ours because he was a media man. He understood, as evidenced by his DuPont television show "Life is Worth Living," that the mass media could not be surrendered to the devil, that the voice of God in His Holy Catholic Church had to be heard.

And another reason we have a devotion to him is that he foresaw the current crisis. As far back as the 1960s and '70s, he said that before the end of the century, other countries would be sending missionaries to America. Look around. How many foreign priests are now staffing parishes — God love them — because vocations have fallen off the cliff in the United States, along with the Faith?

Never forget that it was Sheen who said the laity will save the Church — or rather God through the laity. He recognized, like Mother Angelica did, that the Church was in the midst of a deep, deep crisis and something needed to be done.

Bishop Sheen died in 1979. Mother started her work in 1981, just two years later, and she was obviously aware of him, and they were locked in faith together. She took up the torch, so to speak, that Sheen had passed to her. We see ourselves here in the same lineage of Sheen and Mother Angelica, which is why we are naming our current Studio B — where this "Vortex" is being shot — the Mother Angelica Studio.

These giants have passed a spiritual patrimony to faithful Catholics, and their work cannot be forgotten. It must be advanced and furthered. They were both strong voices for a return to solid catechesis, calling out error and seeing things dead on. As long as the crisis exists, their work must be carried on.

This is why Cdl. Dolan must release the body. The Church wants it. His family wants it. A brother bishop wants it. The Catholic world wants it. And he has no rightful claim to it.

If you don't tweet, then email the archdiocese or call them up. Again,the contact info is down below. 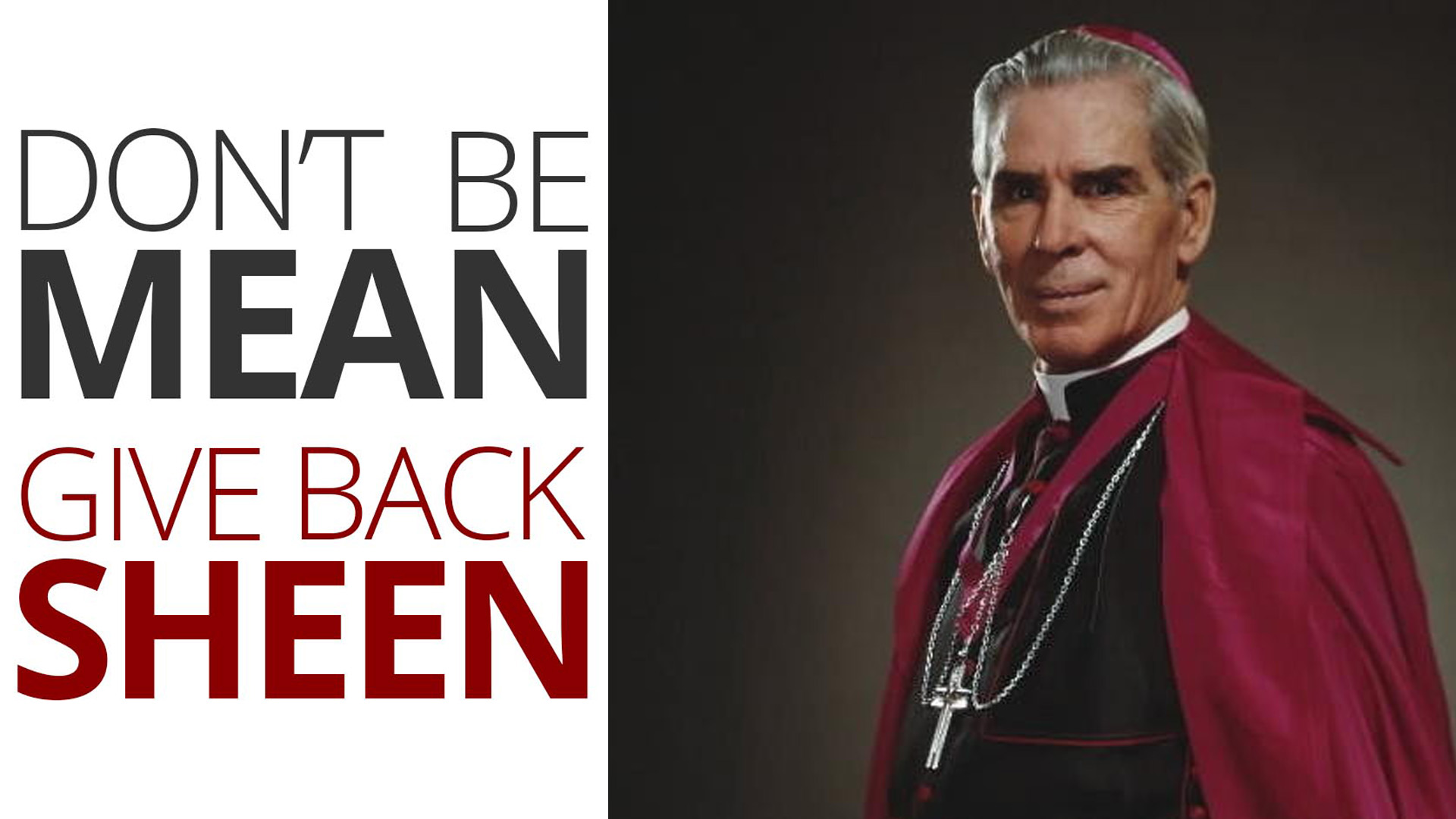 Don’t Be Mean, Give Back Sheen
Return his body. Stop stalling sainthood.