Church Militant Statement on the Pope

It needs to end!

Given the horror that has increasingly seized hold of the Church these past 50 years — and which has climbed to unimaginable heights under the pontificate of Pope Francis — now is the appropriate moment for the laity to offer comment, which we are rightly allowed to do according to canon law.

As many people know, Church Militant has taken great pains in the past to avoid public criticism of Pope Francis with regard to various confusing theological writings, interviews and off-the-cuff remarks.

Out of respect for the office of Pope, and so as not to induce scandal, we have dutifully left the work of publicly analyzing his theological content to those above us, more qualified to address those things specifically and those responses we have covered in great detail.

Likewise, we have made a point of steering far clear of any disrespectful or uncharitable comments denigrating the Holy Father owing to his theological pronouncements — but that was in the arena of theology.

The homosexual clerical sex abuse scandal and resulting cover-up is not theological at its foundation, but moral.

And in this arena, the laity are absolutely duty-bound to speak up, for while we may not all be theologians, each one of us is a moral being and will be judged by Our Blessed Lord on how faithfully we have lived in accord with that objective morality.

With that said, Pope Francis, Holy Father, for the salvation of your own soul, you must step down from the Chair of Peter and do so immediately.

You have treated too many of the faithful with coldness and callousness, abusing the power of your office in regard to their sufferings over this horrendous unconscionable evil which you have facilitated.

On multiple occasions, you have violated your own standard of zero tolerance when it comes to cover-up bishops. You are doing it with Donald Wuerl who covered up for predator priests.

You should have, more than a week ago, stripped him of his red hat, yet he still holds the office of cardinal with your blessing — a man who covered up a homosexual priest gay pornography ring while he was bishop of Pittsburgh, and who Viganò says is lying.

You have protected abusers of power, of office, and worst of all, young adults and even children. You have covered up for them. In some cases, you have drawn them close to yourself and taken them on as trusted advisors.

And now, given the revelations over the weekend from Abp. Viganò's testimony — a testimony you do not even deny — it is now clear that you yourself are one of the cover-up bishops because you directly covered up for an actual predator, Theodore McCarrick, until the media heat got too great to withstand.

You have violated your own zero tolerance policy as it pertains specifically to your own actions and omissions.

You have drawn into the temple of God, the most holy of sanctuaries, wicked men who have both raped and covered up the rape of innocents.

Your hypocritical and shameless parade of empty words of sorrow and pleading for forgiveness are an egregious affront to those who believe in God, because you lack all sincerity.

How many trips are you going to take, paid for by the faithful, where you continue to meet with victims, supposedly mourn with them and then return to Rome and conspire with those who abused them or created the environment for the abuse — or both?

The men you have surrounded yourself with have no supernatural faith, for one with supernatural faith would tremble and drop dead of fright at the thought of being judged for what they — and now you — have done. A man who aids, abets, protects and promotes such wicked, sexually perverted and predatory men is not fit for the Chair of St. Peter — he is fit for far worse.

These wolves in shepherds' clothing brutalize and sodomize the sheep, and you promote them. They have no fear of God, and with each passing day, it appears that neither do you.

Any other bishop acting as you have would have been removed immediately for abuse of power and the gravest negligence of office under canon law.

Catholics hold, as you know well, that the Pope is judged on Earth by no man except God, but in conscience, have you so quickly forgotten that in the case of yourself, you are judged?

With all sincerity and concern for your immortal soul, Holy Father, recalling how you are an old man who may not wake to see the next day, your eternal life hangs in the balance. Confess the truth before you stand before Jesus Christ.

You can duck and weave questions from the press on Viganò's testimony, and offer clever retorts to the media that sidestep the testimony of your own ambassador, but oh how you cannot do that with Almighty God.

Church Militant has independently confirmed with at least two different cardinals that the charges in the Viganò statement are absolutely true — and this is in addition to Cdl. Burke's support of Viganò.

You, Holy Father, as every Catholic must do when in a state of sin, should accuse and judge yourself guilty, now, while you still have air in your lungs, and dispose of the wicked heretics and sodomites you have shamelessly collected around yourself so that they may never have a role in electing your successor.

Then as your last act in office, you should resign the papacy and spare Holy Mother Church and the People of God any further harm and evil that you could inflict upon them!

You are tearing the Body of Christ apart by elevating the very men whose crimes cry out to Heaven for vengeance, who never will stop because they have no supernatural faith.

Your actions and omissions have left you unable to reign over the Church in any meaningful way. You have no credibility, no moral authority, not a shred of decency left after having covered up one scandal after another, until the day you go to your own grave.

You had better hope that this is not the state you die in, or you will be delivered over to the demons for an everlasting death of agony and torment in the unquenchable fire, for popes are not immune from risk of damnation, whether you believe in Hell or not.

And when you would next encounter the henchmen you have promoted in this life, each of you will rip and tear one another apart for all eternity, having contributed to the damnation of each other as well as innocents while on Earth.

Whatever pact of evil you may have created with one another, or rationalized, it will be your everlasting shame and agony when you are plunged into the pit where the fire is never quenched and the worm dieth not.

You still have time, Holiness. Admit your tremendous failings, sweep the wicked hirelings from the College of Cardinals, resign your office and give us back the Holy Church that we love and your sycophantic minions loathe.

Holy Father, your friends, your advisors, have raped men and boys. They destroy truth and innocence and lives and souls. You are covering for them.

After you have resigned and they have been forced from office by you, the first thing your successor should do is prosecute the entire lot to demonstrate to the world that change has indeed come to the Church. It will go much better for you that you face justice now, rather than after you die.

For the good of your soul, Holy Father, so as not to be subject to the tortures of demons for eternity, step down.

Pray, my fellow Catholics, pray your Rosary that the Queen of Heaven convert the heart of the Holy Father and bring an end to this scourge of sexual predation and cover-up.

May God have mercy on us all. 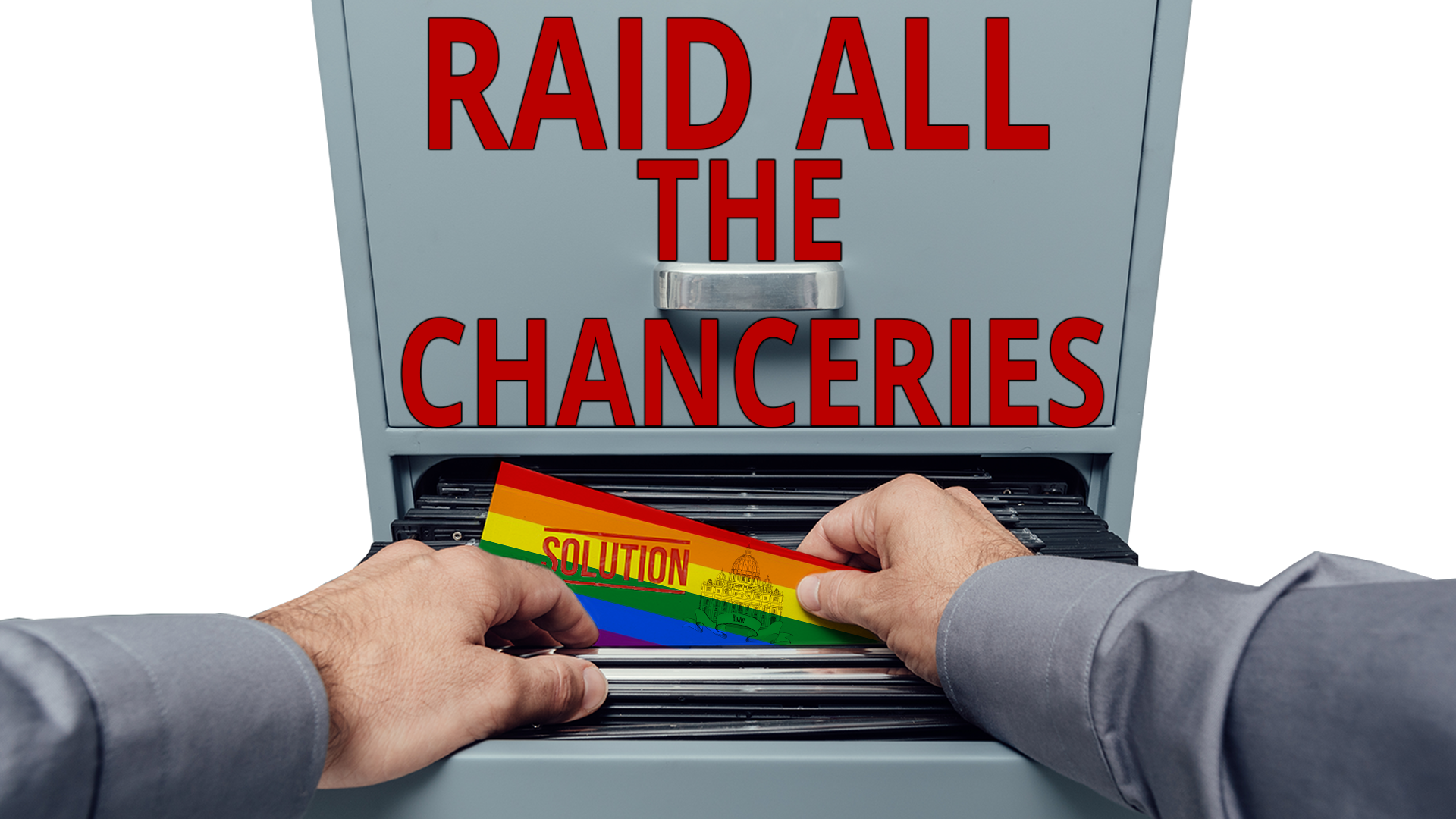 Raid All the Chanceries
And get those secret files.