It's all unfolding, right before our eyes.

The 32-page report was accompanied by a fact sheet that gave a few concise bullet points for those who wanted the CliffsNotes version. In short, if you are a white, heterosexual and Christian male, they're coming after you. That such a category has long been viewed with intense antipathy by the Marxists is nothing new. What is new is that the office of the president of the United States has now developed a national and comprehensive policy for "dealing with you."

For the record, you'd be hard-pressed pursuing historical annals to find a time in world history where religious persecution did not first begin as political persecution. Multiple times throughout this official government document, being white is labeled as akin to some extremist position.

Republicans fought against slavery — that was the party's beginnings. Democrats fought for it — and in their policies, still do.

Biden appointed a bunch of fellow Marxist goons from major institutions to produce the biased report based exclusively on their worldview. In other words, garbage in and garbage out. From the fact sheet, here is a key finding by the anti-God crowd: "The two most lethal elements of today's domestic terrorism threat are (1) racially or ethnically motivated violent extremists who advocate for the superiority of the White race and (2) anti-government or anti-authority violent extremists, such as militia violent extremists."

Precisely what are they talking about? Most lethal? Seriously?

Across the entire nation, White supremacist groups haven't killed the number of people in a year that rival Black gangs in Chicago have in just one weekend. Lethal? In the actual report itself, Biden's goons point to the KKK as a historical reference point, craftily sidestepping that the KKK was populated by Democrats.

Republicans fought against slavery — that was the party's beginnings. Democrats fought for it — and in their policies, still do.

Economic slavery has been brought about by horrible schools and the supposed "war on poverty" that has destroyed the once-laudable black family and created a never-ending cycle of despair and violence. That's what's actually lethal in quantifiable terms.

But unelected Biden doesn't care about any of that — nor do the powers that control him. This entire report is just a smokescreen, a pretense to go after their opposition. Race is a diversion tactic that the Marxists have to employ in America because class warfare doesn't work (since the middle class is too sizable).

So for ideologues who need to divide in order to conquer, they have tapped into America's past of slavery and brought it forward to the present to stoke as many fears, prejudices and so forth as possible — all designed to create a division that they can profit from.

It's interesting that the report makes not a single mention of the violent extremism of BLM or Antifa, which burned cities across America last summer, causing billions in damages. But in the Marxist world, not all violence is created equal. Some is understandable, acceptable and even to be promoted, as Kamala Harris insisted during the campaign.

Biden is setting up a false enemy and then using that enemy to attack his political adversaries. His adversaries are not White, per se. His adversaries are those who hold an opposing worldview rooted in God rather than atheistic Marxism. They refuse to bow to the politics of the sexual revolution and its resultant disastrous consequences of open homosexuality, destroyed families, rampant promiscuity, off-the-charts destructive pornography and so forth.

If you are a believer, then it's simple: There is no such thing as believing in God and yet denying spiritual warfare. If there is a God, then you must accept that a spiritual being revolted against Him and brought death and suffering into the world. That is our material as well as spiritual reality. That's life.

This being — Satan — detests the human race and focuses all his energies on bringing about its misery on earth and ultimately in Hell. That is a worldview Marxists reject because they are controlled by Satan. So anything that comes out of a Marxist's mouth is a lie or lays the groundwork for the lie to be promoted and accepted.

It's not about someone being White and male and heterosexual. It's that they're White, male, heterosexual and Christian. That is the defining quality — religion — thinly veiled under the cover of racism. And not just Christian per se, but believing Christians who do not accept the hegemony of the sexual revolution. If you reject the "pride" bunk, then you are a hater. And if you are a hater, you are in the domestic terrorist camp.

Talk about more than one way to skin a cat. At the moment, the report doesn't have the force of law directly. But it is policy, and that's no small thing. The White House has the power to track, investigate, spy and so forth through federal law enforcement agencies (the FBI, for example) anyone it deems a domestic terrorist. So while it's not a law passed by Congress, it is pursuable by law enforcement.

But it doesn't stop at just a federal law enforcement level. The report talks about expanding the net to catch domestic terrorists through cooperation with state and local law enforcement and social institutions, such as corporations. It is not very hard to imagine how this would unfold.

You need to understand the alliance — we can call it an "unholy trinity" — that exists currently between the government, the media and corporations. They work in close unison with each other; what one can't do, the other one does. At the moment, for example, the government cannot institute an actual law discriminating against you based on your religious beliefs. But if your religious beliefs are deemed "dangerous," a corporation can either not hire you or just fire you. In fact, just ask the thousands of American workers who have been fired because they will not get the COVID shot, owing to religious beliefs.

And that's just for starters. Any Marxist takeover needs a propaganda arm, so enter the national media. Its job is to create fear and panic in people by telling stories, much like the Jan. 6, 2021 insurrection fiction, for example. By making stuff up, they get to push unthinking people into a state of being afraid of all these domestic terrorists. They ignore real news like Black-on-Black crime while they push the White terrorist story.

The goal is to create a groundswell of people who want the government to do something about this danger, which, of course, the Marxist-ruled government happily does, first by "examining the problem with a group of experts," then producing a report.

Satan would, of course, use apostate Catholics to erect an unholy trinity in opposition to the actual Trinity.

The report then goes on to make recommendations and suggestions and creates a strategy for dealing with the most dangerous threat to American democracy. That's called "demonizing." And those controlled by demons are always the best at demonizing. Biden and his Marxist crowd mean to eradicate you from the body politic. They still have some work to do though. The Trump "interruption" saw to that.

But the clock is ticking. Right now, they have the reins of power and they're in the lead in executing their strategy. As a subtle reminder, remember that these Marxists came to power through no small effort of many U.S. bishops who either supported them or fell silent in the face of their evil. They promoted — and still do — phony Catholics who, in a supreme devilish irony, are frequently the political, social and media leaders of the Marxist movement sweeping the country.

Satan would, of course, use apostate Catholics to erect an unholy trinity in opposition to the actual Trinity. 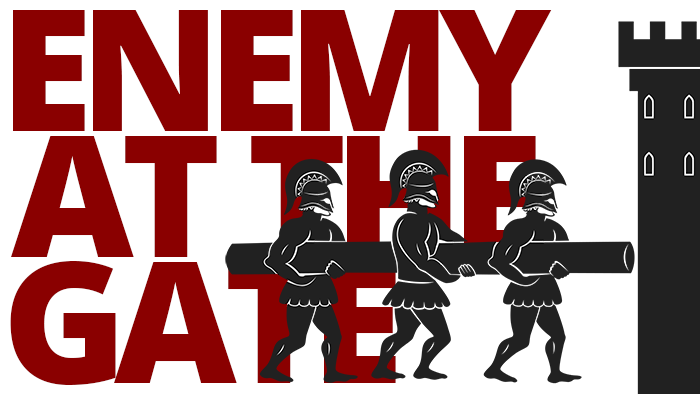 Enemy at the Gate
Defend the truth.