A few years back, I was visiting with a noted archbishop in his office about the dire state of the Church and, consequently, the world. I asked him if he and other bishops of his mind huddled up regularly, called each other, got together, formed organizations with each other, sat on each other's boards of directors and so forth. He looked at me somewhat puzzled, and I said, "Well, your enemies in the episcopate do that!"

He answered me back and said, "Well, no. We don't. Conservatives tend to conserve." And that right there is a perfect sum up of everything wrong in the Church (as well as the world) when it comes to the so-called "good guys."

"Conservatives" — whatever that empty term has now come to mean — are delusional. They fail to either understand or admit that their enemies play for keeps and want us dead. There seems to be this "Marquess of Queensberry Rules" approach to the political and mostly spiritual battle raging around us, like politeness should rule the day. But what is spoken of as politeness and "charity" is really just a mask covering cowardice. It's an unwillingness to go to war and not do what needs to be done.

What is spoken of as politeness and "charity" is really just a mask covering cowardice.

There is something, some disease, in the psychology of people who self-identify as "conservative," be it politics or the Church, and most especially in the Church, because they get to baptize their softness and portray themselves as religious and above the fray — true Catholic gentlemen. Hogwash! Maybe in some dystopian, Victorian, turn of the last century, front parlor, genteel setting in their minds they can think that way, but unfortunately for them (and us), the world is not tracking with that.

But this problem of the "soft" approach is not new. Take, for example, this historical passage from 1871:

What was the resisted novelty of yesterday is today one of the accepted principles of conservatism; it is now conservative only in affecting to resist the next innovation, which will tomorrow be forced upon its timidity, and will be succeeded by some third revolution, to be denounced and then adopted in its turn.

In short, so-called conservatives always give in. They don't fight; they don't even really resist. At first, they protest a little bit, here or there. But in the end, they always give in. We see this in politics constantly, for example. You never hear the Left complaining and scratching their heads over a liberal Supreme Court justice suddenly flipping and becoming conservative. That gate only swings one way.

But in the Church, it's even more pronounced. So much so that there's a long-standing joke among priests that part of the consecration rite for being made bishop includes the removal of the man's spine.

The world is not even. It tilts toward evil, gravitates toward it. The inclination of man is always toward the selfish act. Even if that is overcome here or there, any victory is almost always short-lived. This is the fundamental reality that "conservatives" seem to either not grasp or refuse to admit: Good people have to climb uphill; bad people get to run down.

So the idea that you just hold your ground is a losing proposition to begin with in the face of an enemy attacking. Playing defense always loses. Sooner or later, the forces storm and overcome the castle; they do breach the walls. This is why Our Blessed Lord positioned His Church to be on the offensive, not sit back and conserve. Conserve what, exactly? A losing position?

When He handed Peter the keys of the Kingdom after saying he would build His Church — notice by the way, Church, not Churches, one Church, His Church — He then said that the "gates of Hell would not prevail against it." That was a command from the Divine general for His army to attack. It was Hell that assumed the defensive posture of sitting behind its gates. The Son of God had come into the world to bring a full-on assault to the kingdom of darkness.

Of these two kingdoms, only one would win; only one could win. Borrowing a line from old westerns, there's not enough room in this town for both of us. So on the attack they went — the Apostles, their disciples, the next generation and so forth. They converted an empire, not because they "conserved" but because they attacked. They spent 500 years converting the barbarians and the next few hundred fashioning Western civilization.

None of this was done with a "conservative" mindset, just the opposite, in fact. But then came the next few centuries, and the warriors grew fat and lazy. Built their own castles and hunkered down in them. We know the rest of the story, and today, we are led, both in culture and most especially the Church, by "conservatives." Dear God, spare us from conservatives.

Good people have to climb uphill; bad people get to run down.

This mindset needs to be broken. Saint Paul was not a conservative. None of the Apostles were "conservative." Our Lord was absolutely not a conservative. We can conserve everything we want once evil is defeated. But as long as we are here, conservatism is a sure loser. Lose the "polite" attitude. It's for delusional sissies. Your enemy wants you dead. They want your heads on pikes and your children enslaved.

Conservative means "coward," an unwillingness to confront what needs to be confronted, and not just confronted but attacked and defeated. That's how the Left acts. It's why they are always winning and conservatives, far from conserving anything, are always in retreat. Stop conceding; stop compromising; stop all of it. Isn't it clear by now that it's a losing strategy? Heck, it's not even a strategy.

The good guys suffer from much, beginning with hapless leaders. Unless the rank and file rise up and demand accountability, you might as well just support sex changes for your children, giving up gas stoves in your house, getting your booster every six months and everything else the Left crams down your throat. The idea of being "conservative" has got to be jettisoned from the lexicon of the People of God. 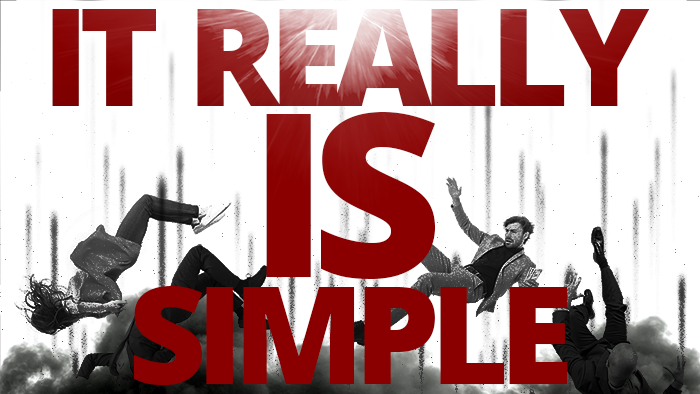 It Really Is Simple
The world is binary.