Brought to you by traitors.

The current crisis humanity finds itself in is so multifaceted that normal people can feel overwhelmed just trying to know all the necessary information — much less trying to process it. That's why the Church Militant team does so much of the hunting and gathering and processing for you.

We don't know everything, obviously, but we certainly know a lot more than most. And we are able to process it all because we screen all of this through the necessary filter of spiritual war.

There's a certain philosophy a person has to use when looking at the world. Either everything that happens over very long periods of time is purely happenstance or coincidence, or there is an intelligence behind it all directing various things and ensuring work begun in one generation carries over not just to the next — but to the next 10.

We are able to process it all because we screen all of this through the necessary filter of spiritual war.

Human history builds on itself. And while the process is surrounded somewhat in mystery, it's clear that there does, in fact, exist a plan. The plan must allow for the foibles of human free will, but even free will choices are not so unpredictable all the time that they couldn't be incorporated into a plan.

In Christianity, the plan is referred to as "salvation history" and takes specifically into account the will of God — both active and passive — as well as the actions of the diabolical in trying to combat that plan. In the world today, we see vast amounts of evidence of a diabolical plan unfolding, meant to interrupt or thwart salvation history.

Trevor Loudon is a world-respected author and researcher who has been studying these kinds of issues in large and great detail for many years.

Loudon starts with the prototype: Satan. As Saul Alinsky said in the introduction to his infamous work Rules for Radicals,  "Lest we forget at least an over-the-shoulder acknowledgment to the very first radical ... known to man who rebelled against the establishment and did it so effectively that he at least won his own kingdom — Lucifer."

We know from the Scriptures (in Genesis) that Satan has children, spiritual offspring who do his will. The Son of God, for example, explicitly went after the Pharisees when he said to them, "Your father is the Devil because you do your father's will."

Satan doesn't have reign and power over man — not directly, not normally. Obviously, possession is a different matter. But he can't make you do something, despite the 1970s joke line "the Devil made me do it." What he can do is influence a person to do evil and give way to temptation and sin. And if he is going to interrupt salvation history and try to limit it, he must accomplish this through human agency.

In the world today, we see vast amounts of evidence of a diabolical plan unfolding.

One of the most important ways that he can do this is through the power of the State, so he directly involves himself in the operations of political institutions. Within the political and cultural sphere, there must arise an effort by men of goodwill, embracing ultimate truth as their motivation, to begin to put certain practices in place to curb corruption and the influence of the diabolical.

In the end, nothing can be achieved without pushing back, fighting and taking up arms. Not for nothing does St. Paul cast the spiritual war in terms of battle. "Put on the armor of God," he commands the Ephesians. Saint Augustine, one of the greatest Fathers of the Church, once famously said, "Pray as though everything depended on God. Work as though everything depended on you."

If you'd like to watch the entire interview with Loudon, which is well worth it, please click on the provided link just below. And if you'd like to read more from this well-respected authority, please go to his website, trevorloudon.com, where you can peruse his impressive list of works dedicated to revealing the diabolical plan on the granular level. 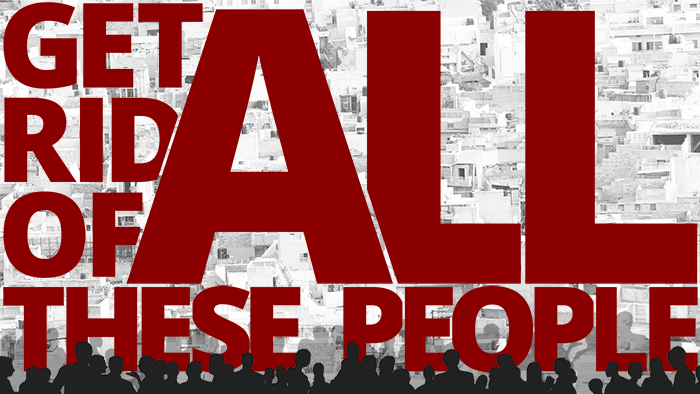 'Get Rid of All These People!'
The overpopulation ruse.