A programming note: Church Militant will be airing a special presentation on Pope Benedict today at 5 p.m. EST. We invite you to please watch.

Pope Benedict has now been laid to rest, entombed in the grotto of crypts under St. Peter's. He's alongside the bodies of many previous popes, including, of course, St. Peter himself (the first pope), which is why St. Peter's Basilica bears his name.

It's a two-thousand-year connection, a straight line back to Peter. It was Christ Himself who gave Simon the keys to the kingdom after changing his name to Peter.

After raising Simon Bar-Jonah to great heights by announcing that He would be the holder of the keys, Peter lost privilege by betraying Our Blessed Lord. And Peter did betray Him, not just deny Him. His betrayal came in the form of denial, but it was a betrayal nonetheless. Not much different than Judas' betrayal, in fact.

From the moment at Caesarea Philippi when Our Lord designated Simon as Peter and future leader of the Apostles by virtue of the keys, he was known as Peter. However, after the Resurrection, Jesus called him Simon Bar-Jonah, reverting back to his pre-designation name.

It would have been an emotional blow to Peter, and he would likely have felt it keenly.

His betrayal came in the form of denial, but it was a betrayal nonetheless.

Along the shores of the sea, Our Lord says to him, "Simon, son of John, do you love Me more than these?" This would have been an extremely difficult thing for Peter to have heard.

First, Our Lord puts the question of his love firmly in front of him, not as a means of humiliation, but as a way to undo his betrayal of Him in the courtyard during the trial where Peter cursed and blasphemed that he didn't know Him.

Second, this occurs in the presence of some of the other Apostles, giving it a public character. Fitting, however, because what Peter did in the courtyard was a public act.

Every sin and every transgression must be countered. This will be the case for each and every one of us. God's justice must be embraced, but His justice is encapsulated in His mercy.

The encounter by the seashore with the other Apostles came weeks after the Resurrection, but even before appearing in the upper room to the Apostles that first Easter, He had already privately appeared to Peter.

It was not there at that very first post-resurrection appearance to Peter that He asked Peter to set things straight, to reaffirm his loyalty and his love, to undo and reverse his sin. The first utterance was of love, not justice, even though justice was waiting in the wings. It is always best delivered in charity to those willing to accept charity.

In the days and weeks following, much will be discussed about the reign and the pontificate of Pope Benedict, and this is fitting. Some of it will be uncomfortable.

There are many questions surrounding the remaining days of his time as pope before he stepped down, paving the way for Pope Francis and the ensuing confusion, even chaos. But any analysis of all this must be conducted in an air of charity.

The Church and the world are in historic times, and much of this was brought on by the single decision of a man named Joseph who had publicly said at his installation, "Pray for me that I may not flee for fear of the wolves" and then did it anyway.

The times demand men of action.

The world and, most especially, the Church are in desperate need of virtuous men of action. We are in a war, and wars are not won by internal virtue alone, although they're definitely lost for lack of it.

With the passing of Joseph Ratzinger — the last pope of what we could style "the old way" — it will now take an iron resolve born out of love for Our Lord and His Church to resist and hold fast.

Much more than just the body of Joseph Ratzinger has been entombed under St. Peter's. The Church and the world have entered a new Dark Ages. And just as the Church led the way out of those dark ages of the past, it will have to do it again.

But there will be much pain and gnashing of teeth, and likely much blood spilled along the way. The times demand men of action, arising from their virtue to face the coming age. The actions must combine faith and reason, as the actions of virtuous Catholic men always have.

It is not just to Simon that Our Lord directs this soul-searing question: "Do you love me more than these?" 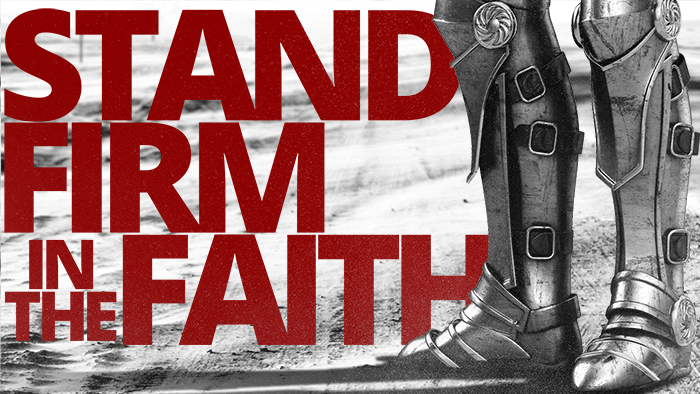 Stand Firm in the Faith
Do not let yourselves be confused.