Freedom of the (Catholic) Press

First, allow us to continue offering our gratitude for those of you contributing to our end-of-the-year fundraiser. We know times are tough right now, thanks to the Marxist takeover of much of the country, but we too feel the bite of all that, so any contributions you make are most appreciated. If you have not yet donated and would still like to, please just click on the link below — and thank you in advance.

What we do here at Church Militant each and every day is simple: We report the truth. Why we do it is for the salvation of souls, but what we do is critical. Church Militant was the very first Catholic apostolate to pour massive resources into internet video on a daily basis. Others have since followed our lead. We've been doing this for almost 17 years now, blazing the trail — and it's a trail that, frankly, needed to be blazed.

The American public, including Catholics, has long ago become accustomed to watching its information and entertainment, not reading anywhere near as much. Like it or not, that's the reality. And now it has exploded to gigantic proportions with dozens and dozens of internet offerings. We were the leading edge of this back in the day and have been around longer than even secular outlets like Netflix and so forth.

While we produce all kinds of content — this Vortex, for example, Headlines, Evening News, blockbuster investigations — it has all taken on the unmistakable quality of a new era in the life of the Catholic laity. Think about this: Up until only very recently, the idea of a Catholic press was a myth, at least as we all understand the press.

What we do here at Church Militant each and every day is simple: We report the truth.

Before Vatican II, with the rare exception of publications like The Wanderer (the oldest lay-owned-and-run publication in the nation stretching back to the Civil War), almost every newspaper originated from either a religious community or a diocese. When the religious communities began disintegrating one by one, the laity stumbled in and picked up the slack.

But even then, as we see with EWTN, for example, if an outfit is not totally independent of the hierarchy, it is going to be compromised — sometimes substantially. Many of these are outfits that guarantee their continued existence by never ticking off the bishops. They are granted access to the halls of power and are part of the establishment because they echo what the bishops want repeated.

They also even enjoy the promotion of the hierarchy, who grant them interviews and such, as long as they toe the party line — step outside, and it's curtains. For example, how many stories have you seen in the non-free Catholic press about the health risks arising from a certain medical treatment pushed by the Marxists?

Yet despite all that is coming out now and being revealed, not a single bishop has come forward and apologized to the faithful, his chancery staff, his priests (some of whom were forced to go along with all that), even seminarians who were not permitted to return to their studies without a stick in the arm.

Yet not a single Catholic establishment press outfit has dared to go near that story. Sacraments were denied, people were not given last rites, schools were closed and parishes were shuttered for months and months — even for more than a year in various places. It turned out to be a fraud, and yet still, not a word from the bishops' stenographers, known as the Catholic press — because they aren't the press. The purpose of a free press — meaning independent press — is to hold those in power accountable.

That single point is what's new in the world of Catholic media. Never before has there ever been any large-scale operation from within the Church to call out the malfeasance of bishops — their corruption — and broadcast it to the world with the goal of bringing about change for the better — and certainly not in the world of video. Church Militant started this, introducing secular, free-press principles into the Catholic world.

And yes, the bishops hate our guts for it; some of them even say so. What we have uncovered over the years and backed up by our reporting is that the degree of corruption and cover-up by these men is staggering — financial, moral, liturgical, legal and political. It boggles the mind.

In the secular realm, political reporters are the watchdog of the government, at least in theory. We all know that hasn't been the case for decades — but it looks good on paper. But even the secular free press does play by the rules of industry professionalism in areas of ethical guidelines among the competition. That is not the case in the Catholic press world. The corruption of the bishops and their love of money (among other things) has spilled over into many outfits in even the independent Catholic press world.

There are clickbait headlines, editorials thinly disguised as "news," just plain old bad reporting — not checking sources, not telling readers that the reporters often have a conflict of interest in the story they are "reporting" on. If you have a dog in the fight in a story you are reporting on and don't come clean with that, it's journalistically unethical. But it's much more common than you might think.

Some stories, for example, are run on behalf of a particular donor's point of view to keep his contributions flowing in. That is not done by an independent Catholic media outfit. It's just controlled by something other than the bishops but just as duplicitous — in some ways, even more.

We say all this because any media outfit rises or falls on its credibility, period. That's true even in the secular world. In the Catholic world, it's true even more because your credibility is tied not just to the truth of what you are reporting, but to the consequences of your reporting on the welfare of souls. We don't report what we report to get people enraged or to donate to us.

The purpose of a free press is to hold those in power accountable.

We report what we report so people are properly informed about what's going on and can make correct choices — meaning, choices that lead to their salvation and that of the ones dear to them. Some people donate to this work of ours because they believe it is important, and it is. The world is not only changing but changing at a rate unimagined even 10 years ago by most of us.

That means new challenges, new tactics, continuing information (vetted, investigated, well-presented) to help people see through the murkiness and plot their course to Heaven. Church Militant has never compromised this mission. No one produces information like we do — independently — with journalistic professionalism and integrity while also remaining steadfast in properly presenting the authentic teachings of Holy Mother Church, even while many are tempted into schism or heresy, not to mention apostasy.

This is what we are asking for your help with: to maintain what we do here, how we do it and why we do it. There's going to be a lot more explosions along the way in the coming months and years, and Catholics, as well as others of goodwill, need a clear, clarion voice to help them struggle through all this.

That voice is Church Militant's, the leader in every bit of this. So please click on the donate link and contribute whatever you feel you are able, before the end of the year. Thank you in advance for your generosity. 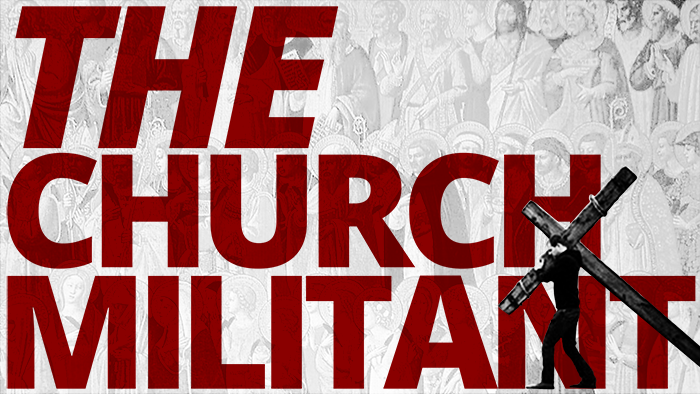