Monday, the United States Supreme Court redefined the traditional understanding of "sex" as the biological differences between male and female. In its place, the justices decided that sex now includes sexual orientation, transgender or anything else they want it to mean. The latest ruling keeps pace with a string of rulings redefining everything that went before.

There is a deep danger here for people — religious people — who live their lives by the actual meanings of these words. With every assault on the meaning of words, the principles behind those words are more and more jeopardized to the point of being made criminal. We are at that tipping point as we speak. The ruling [in Bostock v. Clayton] sets up a clash between the so-called civil rights of gays and transexuals against the First Amendment rights of religious believers.

The coming showdown was more than hinted at by Justice Neil Gorsuch — who flat-out shocked conservatives by siding with liberals in advancing the homosexual agenda — when he wrote in the majority opinion, "How these doctrines protecting religious liberty interact with Title VII are questions for future cases, too." The future (and perhaps final) battle is now set.

A future court, short of some stunning turnaround or raft of new appointments, will declare personal religious beliefs, however sincere, cannot override the "civil right" to have sex with whomever a person wants, whenever they want, under whatever circumstances they want, while being employed by whomever they choose to work for. For the moment, let's shift from future considerations and ask the simple question of how we got here. Well, there's been a cultural shift — a seismic cultural shift — in how Americans view, first of all, sexual morality itself.

It started slowly in the 1960s with contraception and, two to three generations later, [the Supreme Court] has declared sodomy a constitutional right and now stands on the precipice of declaring opposition to any of it "criminal."  We're just one step away from that; so know that's what's coming. The culture was originally pushed into the abyss of sexual immorality in the '60s, as a result of Protestant "thought," which accepted contraception, divorce and remarriage.

But once the majority began its embrace, a crisis moment came for U.S. bishops: They could resist or they could fold. They chose to fold, and the dam exploded in 1968 when many either would not defend or actually joined in the revolution against Pope Paul VI's encyclical [Humanae Vitae] reasserting the Church's 2,000-year condemnation of birth control.

The aspect of this drama that many pew-sitting Catholics did not realize at the time is that a quiet invasion of homosexual men into the Catholic priesthood and religious orders had already begun. These are the men who would advance into positions of leadership over the next decades, who would either make a career out of raping teenage boys by the thousands, or covering it all up, or in some cases, both.

When they weren't raping or abusing their authority, they were weaponizing their power to pervert doctrine — to fashion a Church in their own image, meaning gay! For years — decades — men who were heterosexual were blocked from getting into (or actively hunted and kicked out of) seminary, while active homosexuals gained acceptance left, right and center.

The aspect of this drama that many pew-sitting Catholics did not realize at the time is that a quiet invasion of homosexual men into the Catholic priesthood had already begun.

Large numbers of these homosexuals were active, as were their formators and bishops. They were sent into parishes and began subtly crafting the Church's teaching on loving one's neighbor to mean accepting sin, and, of course, never "judging." Each Sunday, millions and millions of Mass-going Catholics had it drummed into their heads that they should never judge — anything. Of course, this was being sold to them by active, sodomite clergy who wanted to create an atmosphere where they would never be judged and their own personal sin would be accepted if ever made public.

In short, these men entered the priesthood and used it to corrupt the minds of the sheep, to pave the way for the acceptance of homosexuality in the name of "loving their neighbor." The collapse of a Catholic defense was instrumental in the broader cultural effort of advancing the gay agenda. With the Church effectively neutralized, at best — and severely compromised, at worst — by infiltrators, nothing stood in the way of leading society off the cliff.

Thousands, tens of thousands, of gay men destroyed the priesthood and cleared the way for this. This was and is known to loads of bishops, many of whom themselves are gay, not to mention homopredators who have been part and parcel of this filth. So it is with some caution that faithful Catholics approach a statement in response to the Supreme Court ruling issued by Los Angeles archbishop, José Gomez, who is the current president of the nation's bishops' conference.

He said, "By erasing the beautiful differences and complementary relationship between man and woman, we ignore the glory of God's creation and harm the human family, the first building block of society. Our sex, whether we are male or female, is part of God's plan for creation and for our lives." Now, forgive faithful Catholics if we view your effort here as one of supreme hypocrisy. For a half-century, bishops up and down the U.S. hierarchy have, at the very least, turned a blind eye to this rot within their own ranks. They have actually advanced practicing homosexual clergy within their own dioceses. They have set these wolves loose on their own flocks. They have refused to kick out the doctrinal perverts from within their parishes.

This has been the case for decades and, as a point of order — remember — more than 80% of all the cases of sex abuse were inflicted on physically mature, teenage boys by homosexual men in collars, and still they [the U.S. hierarchy] did nothing. And even in the case of Gomez himself, the hypocrite continues to allow the likes of James Martin and Brian Massingale to speak at the Religious Education Congress, promoting homosexuality, transgenderism and same-sex "marriage," openly.

Our point here today is this: It was leaders in the Church that set the stage for that Supreme Court ruling this past Monday.

Church Militant knows for a fact that Gomez knows, because we approached him personally in the hallway of the conference center at one of the congresses and said flat out that heresy was being preached from the stage of his conference. He deliberately looked puzzled and then was ushered away by his secretary — and did nothing to correct the problem. A year or two later, James Martin enjoyed a place of prominence on the list of speakers.

When you talk privately with many of the bishops, you come to learn that many of them have a "soft spot" for this issue, even the two or three who aren't gay, because they went to seminary with these guys and developed friendships with them. There is, of course, also the strong suggestion (by those who know) that many of today's bishops were, at one time, hopping in and out of the sack with the guys during their earlier years in seminary or rectories.

They may have had a change of heart and come back to the side of the angels, but nevertheless, they were forever compromised and fear that if they move against the gay cabal, they will be outed for their own pasts. There are a host of reasons — a wide spectrum — why various priests and bishops would either be supportive or silent in the face of the perversion of the Church's teachings, but the individual reasons don't matter: They can each answer to God at their respective judgments for allowing the perversion, and the resulting destruction of souls, happen.

Our point here today is this: It was leaders in the Church that set the stage for that Supreme Court ruling this past Monday. And it is the few remaining Catholics who survived their filth who will now have to pay the price. 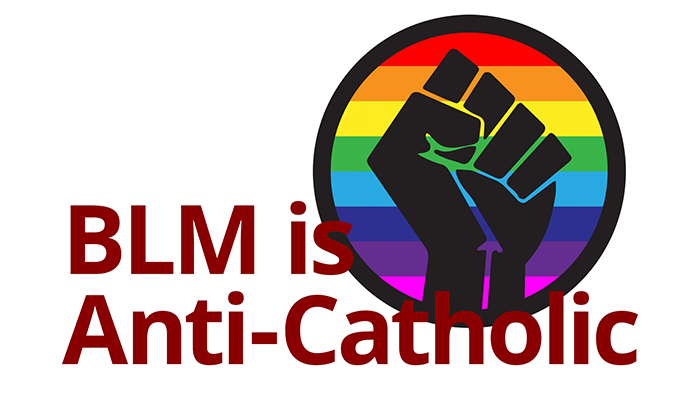 BLM Is Anti-Catholic
And is straight-up Marxist.