In its continuing effort to supposedly save the planet and people's lives, the Party of Death now has its eyes trained squarely on the gas stoves in Americans' homes.

It was such an over-the-top claim that the U.S. Consumer Product Safety Commission immediately had to backpedal and issue a follow-up statement — eerily reminiscent of Obama telling the country to calm down about Obamacare — saying that if you like your gas stove, you can keep your gas stove.

About one-third of the 40 million U.S. homes use gas stoves, and in an effort to get rid of them, Democrats built massive tax credits into their so-called Inflation Reduction Act last year. Switch to electric, and they'll give you $840 of other people's money to do so!

The apparent "reasoning" is that a medical study was released saying gas stoves pose a health threat, especially to children. By that reasoning, the Marxists should ban abortion. They claim that the major threat is nitrogen dioxide poisoning the environment, right along with all that carbon, and people need to be protected.

One thing we've noticed when we go back and look at our earlier productions is just how relevant they are today.

AOC, of course, got in on the act, going on social media to once again tout the moral supremacy of her Green New Deal and how the planet must be saved at all costs.

Whatever perhaps legitimate claims might be made about a possible health threat a gas stove may present, this whole drama highlights, yet again, the Biden administration and his whole party's obsession with saving the planet.

Speaking of Biden, one particularly humorous social media post profiled Jill Biden cooking on the family's gas stovetop. And, of course, the responses zeroed in on the question of whether the FBI would be raiding the house, not in search of classified documents, but to rip out the stove.

There is a prevailing thought on the Left that there are just too many people on the planet — period. Despite their best efforts to push abortion and contraception, which have been extremely successful, they still aren't satisfied. Too many people remain — period. The reproductive rate has got to come down more, and some people may have to be eliminated.

Think of it as a worldwide eugenics program, not necessarily aimed at a specific race but, rather, the overall headcount of the human race.

This stretches all the way back to that stellar decade of the 1960s when what's called the Club of Rome was founded. CR is essentially a think tank for elites who invent problems and then create solutions to those problems that impact everyone, except themselves and their other global elitists. Think Jill Biden's stove or John Kerry's private jets, and you get the picture: Rules for thee but not for me.

In 1972, in close timing with the "there are too many people" hysteria then emerging, the Club of Rome published a little-known, but extremely influential, work entitled The Limits to Growth. Again, the emphasis was that there are just too many people on the planet.

While that line of reasoning became popular among academics and lawmakers, it never really caught on for Main Street — not enough to support any giant legislation to actively reduce the number of people anyway. So a shift in approach began to be emphasized. The chatter about too many people changed to "the planet is in crisis and there are now major health risks to everyone."

So governments around the world and their allies in academia and the media all started talking not about too many people but global warming, melting icebergs and so forth. When all those dire predictions failed to actually materialize, then the emphasis shifted again, this time from global warming to just the more benign-sounding "climate change."

"Save the planet" is a much easier sell than "don't have children and reduce the existing population."

While it was already well ensconced in public discourse, "climate change" as policy talk really took off under Obama. He tried to push his "cap and trade" initiative, for example, which would have allowed only a certain amount of carbon credits per U.S. manufacturer.

If a company ran out of credits, it could trade something with other companies in exchange for theirs. All done in the name of science, of course. The Party of Death has been "following the science" and insisting that "we're all in this together" for quite a while now. They've got it down.

A Catholic ear immediately hears the enormous issue with all this. The entire thing is based on errant philosophy masquerading as science. Sound familiar? As usual, when dealing with death merchants and snake-oil salesmen, there is always much more at work behind the scenes than the propaganda being presented.

When evil-minded people get control, power is the name of the game.

A dozen years ago, Church Militant produced an in-depth look at all this in one of our Faith-Based Investigations entitled Global Warming Unmasked. We highly suggest you view it if you haven't. Just click on the provided link. We put hundreds of man-hours of research into this production, so it is extensive.

One thing we've noticed when we go back here and look at our earlier productions is just how relevant they are today — even more so, in fact.

Congressional Democrats and their globalist allies want fewer humans on the planet. The leaders have been very explicit about that. And they use every means possible: abortion, contraception, climate change, whatever it takes. They sit on Capitol Hill and other capitals around the world passing laws and instituting policies to do just that. It's a very involved, multi-layered strategy, but it has that goal in mind.

Everything they do keeps the population living in a constant state of fear so they can capitalize on that fear to pass their laws. Is your gas stove a major piece of the puzzle? Likely not, but it keeps the "you're going to die" and "the planet is going to die" narrative firmly in front of you.

When evil-minded people get control, power is the name of the game, not you. You, in fact, are the enemy who must be overcome by trickery and propaganda. 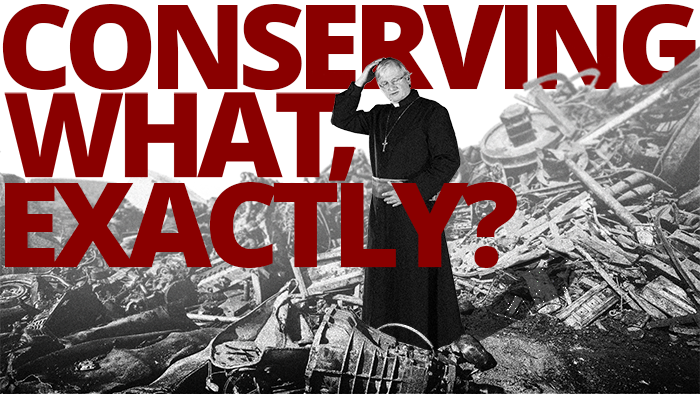