Things get worse before they get better. Really?

A very holy, happy Christmas to you and all those dear to you. First off, thank you to all of you for your support and encouragement throughout this year and especially in this end-of-the-year fundraiser. Your support of our work is critical, so, again, thank you. Please click on the provided link to make whatever donation you are capable of.

Surveying the collapse of nearly all that is good, certainly on a large scale, many people are stunned, shocked — especially those of us old enough to remember a Church and nation in much different shape. That we actually sit around and have debates, discussions or even just read headlines about 10-year-olds, for example, undergoing operations to change the appearance of their bodies to the opposite sex — it's completely nuts.

No one could have thought, even one generation ago, that any of the current conditions would be so prevalent, yet here we are. All of this, of course, suggests that things will get worse. On that score, we often hear the expression "Things will get a lot worse before they get better." The first part of that is certainly true, but the back half, "before they get better," has in there an assumption not rooted in anything realistic.

Who says things will "get better" or that there is some magical trajectory that things always improve? Most of humanity is damned. It certainly doesn't apply in the spiritual war, so why would anyone think it applies in the natural order of events? It's a Pollyanna reading of historical events. Left to their own natural arrangement, things get worse, not better.

Left to their own natural arrangement, things get worse, not better.

"Better" is only brought about by striving for it:

We intuitively know these things. Yet when it comes to looking out on the disaster that is the culture and the Church, most people (Catholics included, even good Catholics) just leave their intellects and intuitions at the door. They think reposting something on social media is somehow being in the fight. They further allow themselves to be hoodwinked into thinking that clicking on a useless online petition means they've done their part. You haven't done a thing except feel like you have.

There are the emotional, explosive responses to the bad news du jour, on which many Catholic social media personalities thrive — got to get those clicks, after all. Notice what all that has in common — it's instant gratification, in a theological context; a spiritual dopamine rush but with no real lasting effects, except, of course, that the next one has to be an even greater high.

Here at Church Militant, we deal and think in terms of the long game. Online petitions do nothing, other than give your email over for later donation requests. Posting stuff around on social media has a minimal effect at best. Yes, it's good to inform, but if it's left there, then what's the point?

We got to where we are because the communist forces, born of Freemasonry, set out on a hundred-year march, content to not get to see their actions come to fruition but content to know they would. Not one of those atheists suffered from fulfilling a need for instant gratification. Corruption takes time, sometimes a long time, to take control and completely "flip" an institution or, for that matter, even a person.

They were perfectly willing to wait, to set in motion things they knew would introduce chaos into the world. They were organized. They knew their enemy, which was the Catholic Church and the family and all its teachings based on the dignity of man, made in the image and likeness of God. They had a goal. They knew their enemy. They drew up a battle plan. They waited for the right moment to launch an assault. It was a well-crafted, well-executed plan, and it has succeeded.

Where is the organized counterattack? Where is the Catholic military response to this aggression? Your country, your land, has not been infiltrated. It's been invaded and is now occupied, and too many think clicking a petition or reposting some clever satire on Twitter is sufficient.

They want you to think that. It makes you feel secure, lulls you into a false sense of security, makes you feel like you are in the fight — but you're not (not in any meaningful way, that is). It's like voting Republican; sure, why not? But don't expect anything on that score, except a minor win here or there.

District of Columbia is controlled by the uniparty, also known as "the Swamp" — same thing in the Church right now. It's controlled by modernists. In political analogy, think Democrats and, assisted by self-preservationist cowards (laity as well as hierarchs), think Republicans. Exactly what getting-better scenario does any reasonable person think is going to emerge from the ecclesiastical swamp?

As long as you are a keyboard warrior, they will never have to worry about you being an actual warrior. What the communists did in order to eventually seize control by grabbing the narrative, driving the narrative, was first present the narrative. It was somewhat subtle at first, but they simply presented ideas and raised questions challenging the established order, which is to say, the moral order taught by Catholicism.

For example, 40 years (actually more) would go by between the time that sex was believed to be reserved for marriage and procreation until the sexual revolution got rid of that. Appeals were made to eugenics, in the beginning, until Hitler forced them to change their vocabulary. Eugenics was quickly replaced with the myth of overpopulation, and then, the beat carried on.

But all of this warfare happened on a million little battlefields and millions more little skirmishes around kitchen tables, holiday gatherings, classroom lectures, book publishings, media productions and so forth. It was a giant army deployed in little squads all over the culture.

Where is the organized counterattack?

Eventually, of course, the weight of millions of little victories collected into one giant victory. That's how war works. They played the long game — and that's what we do here at Church Militant. It's a hundred years' (if we are lucky) war. Yet there is little necessary aggression, no real militancy on our side. That has to be the first thing to change.

You need a fighting force before you can deploy it. Right now, the "force" resembles little else than a ragtag, confused gathering of a few people aimlessly wandering about, dazed and confused and clicking on things at their keyboards.

An army, a military, a militia — rooted in Catholic truth, trained and equipped for battle — needs to be built up. Part of all that includes knowledge of the past. How did we get here, who were the players, what did they espouse and so forth? This is a major reason we are asking for your support here at the end of the year, to keep Church Militant as the tip of the spear in this effort.

It is a hundred years' war, and the vast majority of the faithful, as well as others of goodwill, have no concept of that; and worse, they are not prepared for it. This is the single, most crucial step that needs to be taken. God Himself declares, "My people perish for lack of knowledge." It's time to become informed, not reactive. Informed, brought through the school of Catholic militancy, which is, of course, for what we were each baptized.

Please click on the link and donate today. Thank you. 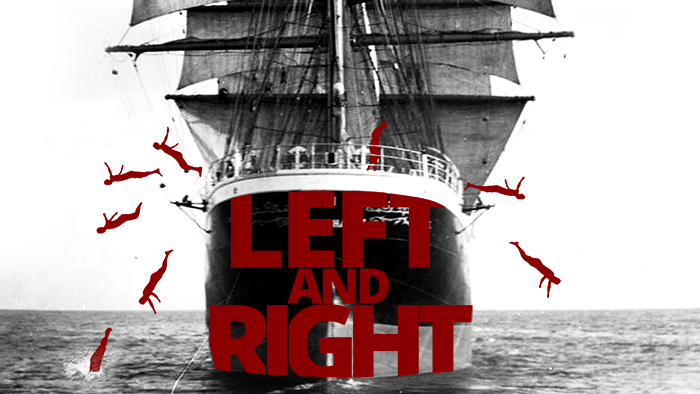 Left and Right
You can fall off in either direction.