Open borders. Closed borders. It truly is a grab bag when it comes to the question of immigration — legal and especially illegal. Let's begin with China, which recently announced that it's become much more "family friendly." Since the death of Mao Zedong in 1976, China became extremely violent toward the idea of children, instituting its savage one-child policy along with forced abortion as the enforcement mechanism.

Sidebar — Joe Biden, the "devout Catholic," never had a problem with that and was instrumental in gaining the Chinese the much-coveted "most-favored-nation trade status" during his time in the U.S. Senate.

Over the ensuing decades, the Chinese communists relented somewhat, occasionally rolling back some aspects of the one-child, forced-abortion policy. But as the decades wore on, the commies in charge realized that killing your future generations didn't make for good long-term prosperity.

So this year, in a complete about-face, the child-killing commies in Beijing are now encouraging couples to have babies and are even talking about expanding child health care. Who'd have thought even a few years ago that commies in China would understand how bad abortion is before American political leaders?

The whole murderous mindset began back in the mid- to late-'70s as the myth of overpopulation was becoming entrenched around the world. The Chinese communist solution to poverty was simply to kill the poor, much like American foreign policy has been since Obama and now on steroids under Biden.

But when the economic toll of killing off your future generations begins to be realized — well, emergency overdrive measures are deployed. All of a sudden, in countries around the world, governments are pro-child in an effort to increase their populations — imagine that.

But despite its 180-degree turnaround, China has made very clear it will not be opening its borders to immigration as part of the strategy to bolster its lopsided demographics. Bringing in foreigners en masse is not seen as a viable option to solve its problems — so says Beijing.

Shifting now to Washington, it seems just the opposite approach is in favor. That is, kill your native-born future generations and "fix" the population problem through nothing but immigration, especially illegal immigration. Consider what the Marxist Democrats have done in the district; they supported, in virtual complete lockstep, denying health care to babies who survive abortion. Minus one Democrat, it was unanimous. This, of course, on top of the bill they passed last term — when they were in control — to enshrine abortion up to and beyond birth as the law of the land.

The Democrats are abortion crazy. But they are also illegal-immigration crazy. Biden has only been in the Oval Office for almost two years, and estimates are between three and five million illegals have walked across the southern border. Add those numbers to the estimated 12–15 million already in the United States (and those are lowball estimates) and there is a sizable illegal population in the United States — beginning to approach 10% of the entire population.

But there is a Catholic angle to this whole story. In near complete defiance and distortion of Catholic teaching, the U.S. bishops not only continue to defend the Party of Death with their silence and permission for the murderers to receive the sacraments, but they also get hundreds of millions each year from these same child murderers to wipe out the nation's borders.

On abortion and illegal immigration, you'd be hard-pressed to find a more warped application of Church teaching than that followed by the U.S. hierarchy. Such are the effects of Freemason modernism. The Chinese communists are actually further developed on this than the U.S. bishops.

On the question of destroying the borders under the guise of "being Christian," the U.S. bishops not only get huge amounts of money from the district each year to handle and process these millions of illegals, but they also get to inflate their own numbers. The major countries where illegal immigrants are flooding across from are Mexico, Cuba, Nicaragua and Venezuela. Seventy-two percent of Mexicans are Catholic; 60% of Cubans are Catholic; for Nicaragua, it's 73% and Venezuela is 98%.

More than 75% of illegals coming into the United States are Catholic to some degree, meaning the overwhelming number of the total illegal population in the United States is Catholic. Millions of people sitting in Catholic churches each week are illegal immigrants. What does that do to the head count of U.S. Catholics published each year by the bishops? It presents a false picture, that's what.

While there's no real way to determine the exact number of how many illegals comprise the official head count of Catholics, some basic assumptions can be made to arrive at some decent guesstimate. There are approximately 20 million illegals in the United States and roughly three-quarters are Catholic, about 15 million. Assuming about half attend Mass and are somehow counted in the bishops' numbers, we get roughly 7.5 million Catholics (on the rolls) who are in the country illegally.

Additionally, we also know that the percentage of white Catholics, largely from European stock, has been in a free fall for decades and shows no sign of changing course. So what this all translates to is this: There is an asterisk next to the claim that the Catholic Church is the largest religion in the country — not exactly. There's also a big caveat when we talk about the percentage of Catholics in the United States relative to the entire population — also not presented accurately.

Let's start with the second one first. Catholics number about 62 million in the United States, according to the bishops, which translates to about one in five Americans. That roughly 21% number means it's the largest single religion in the country.

But if you suck out roughly seven million from that total because they are not actual citizens, the overall percentage drops to just 16%. The conclusion of the math here is very easy. Illegal immigration is keeping the bishops' numbers artificially high. The real percentage is something much lower than the statistics being published.

The Democrats are abortion crazy. But they are also illegal-immigration crazy.

This also points to the reality that if illegal immigration were not a thing, at least in the massive numbers that it is, the Catholic Church in the United States would have long ago slipped from its exalted status as the single largest religious body in the country to second place, and, depending on how you count some Protestant denominations, perhaps even third.

Christianity in general in the United States is on a downward spiral, but leading the race to the bottom is the Catholic Church. Artificially inflating enrollment numbers by including people who are not citizens cannot continue to mask this reality. Church leadership lost its way here in the United States decades ago, and current leaders simply have no answer for this.

Obviously, in the end, it's not strictly a numbers game. That said, numbers do occupy a place of importance. They do reveal some things, perhaps not perfectly — but they aren't nothing. And when they shore up and match up with other data, then an overall picture can begin to come into focus.

European-descendent Catholics are leaving the Church (have been for generations now). The Church is becoming increasingly Hispanic, roughly 40% overall. And while those trends continue, the one the bishops will not talk about is the increasing dependence on illegal immigration to keep the numbers and ranking artificially propped up. Overall, in fact, there is very little you could label as "success" that the bishops could point to.

Their politics are bound up with an image of their grandfathers' Democratic party, which hasn't existed for 60 years. They feed way too much at the trough of federal tax dollars. Most don't seem to either know or believe the Faith and, to whatever degree they might, are ineffective at communicating it. 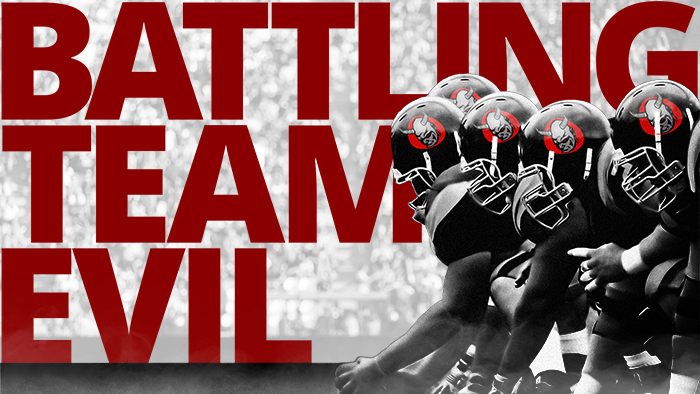 Battling Team Evil
There is only one weapon.