It Really Is Simple

The world is binary.

For all those crazies out there preaching and thinking that everyone goes to heaven, they're sort of right — at least with the underlying assumption in their poor reasoning that it's a simple process. It is. It really is simple: If you die in a state of sanctifying grace, you're there. Likely Purgatory beforehand, but you're still saved. And that's not to discount the sufferings of Purgatory, but this Vortex is about salvation, not the purgations we'll likely experience.

So if all that's required is to die in a state of sanctifying grace, then sign me up, right? Well, sure. But this is where the rubber hits the road. It's unfathomable that the vast majority of humanity actually does die in a state of grace. The logic then follows that the vast majority of humanity is damned, no matter what Bp. Barron says — or smokes.

So the examination and analysis that has to be objectively engaged in is this: Am I in a state of grace or a state of mortal sin right now? In short, the logic continues, if I were to die at this instant, would I be damned or saved? That question is the answer to the much-ballyhooed question, "What is the meaning of life?" The meaning of life is to be saved — period.

If I were to die at this instant, would I be damned or saved?

So let's look at this state of grace, shall we, and let's use the analogy of a light switch and dimmer. Regardless of there being a dimmer, it is true that the light bulb is either on or off; there is either electricity flowing to the light bulb or not.

A soul is either emitting light or it's not. How much light is a different matter, and that can increase or decrease throughout a moment, hour, day or whatever. But there is light, whether it's 1% or 87%. You can say that the bulb is in a "state of light" to a lesser or greater degree. But if the world were to suddenly end and that bulb was to "die," it would die in a state of light.

Now, how does a soul calculate if it is in a state of grace or in a state of mortal sin? How does it know that the light that was once present is gone?

Well, Our Blessed Lord Himself lays all this out pretty clearly. Being in a state of grace means the soul has sufficiently conformed itself to be able to "host," or be a home to, the Holy Trinity. So how does that happen? By keeping the commandments.

Jesus said, "If you love Me, you will keep my commandments, and my Father and I will come to you, and We will make Our home in you."

So being a residence for the Holy Trinity requires an act of the will. We must actively choose this and then act accordingly. It doesn't just happen. It must be chosen by our free will and then reinforced by our actions. Salvation is absolutely dependent on what we do, our deeds.

No one is saying we "earn" or "win" salvation based strictly on our good deeds. Salvation was opened for us as a possibility because of Our Lord's Passion and death. However, having accomplished that, it is now up to us, as He Himself instructs us, to conform ourselves to Him by obedience. Redemption was a one-way street, and only Christ could travel it. Salvation is a two-way street and is the highway we must travel.

So let's take this truth and look at its relevance in the modern world. Can we seriously look around and think that the vast majority of people are walking around in a state of grace? Seriously? No, no one except God can judge their souls, but what a person does is produced from their soul.

What about lawmakers voting for child killing and sodomy? The Swamp stealing from taxpayers and creating massive hardships for families? Lawmakers' overall refusal to deal with, and, in frequent cases, actually causing economic collapse and all the devastating consequences that has on the average citizen?

All these sins are grave in nature and the Holy Trinity takes leave of such a soul because they cannot dwell where there is serious sin. What about the spiritual ignorance of people being indifferent to the sufferings of their friends and family and those around them? What about the refusal to speak because of fear of being rejected or humiliated?

The meaning of life is to be saved — period.

All of these things are serious sins and a person cannot, at the same time, embrace these sins and yet still love God. Electricity cannot both be flowing and not flowing to the bulb at the same time. The light is either off or on.

Despite the insanity of those in the culture who claim "nonbinary" as their identity, as well as those who sit by silently in the face of that, the world is very much binary, and, most of all, the spiritual world is.

You are either in light, even if it's dim, or darkness. You cannot be both. And each human being will either be in Heaven or Hell, not both, as a result of his actions. Sin and its effects are much more serious and deadly than is commonly believed or lived.

All the saints and Doctors and Fathers of the Church were of a near-unanimous mind on this point: Most of humanity is damned. To pretend otherwise is foolhardy. 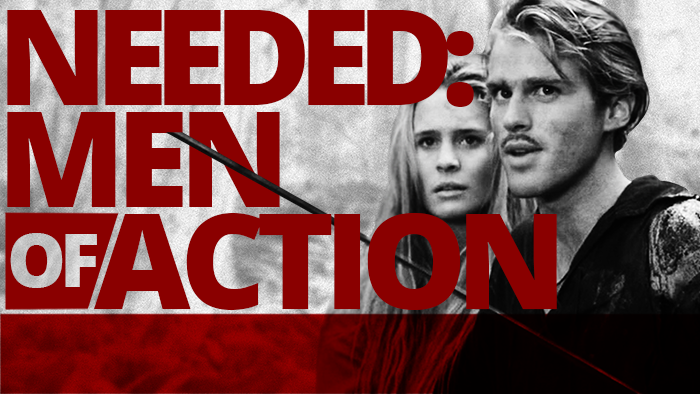 Needed: Men of Action
That’s what's needed in the Church.