I'm Michael Voris, coming to you from the final day of the Renewing America Tour in Virginia Beach this past weekend.

When you look at the crowd of thousands and the impressive list of speakers, it's easy to forget that all of this began just about a year and a half ago with an idea. That idea was to combat the garbage going on in the country.

Clay Clark was a successful businessman, not a political activist and organizer. He'd built up a tidy little wedding-planning empire around the country. But then, a few months after Biden assumed the powers of the presidency and began carting along his whole global reset agenda, Clark became concerned — deeply concerned. What began small (in idea) has now become a nationwide tour of 13 massive conventions, each one sold out, often weeks in advance. Dozens of speakers educate and inspire the audiences, not just in person but also through the multiple patriot media outfits that livestream it.

And there is nothing about the agenda of the globalists that does not get discussed here. From the COVID tyranny to the co-opting of the U.S. government by communists, you name it, it's on the main stage sooner or later. Interestingly, however, one topic continues to fly under the radar, and that's owing to the reality that this is largely a Protestant-attended event — even then, it's certainly not all Protestant congregations.

Just as the pro-life movement in America has largely been a half-century effort on the part of Catholics, including the Catholic justices who struck down Roe, the more broad-based patriotic movement is largely fueled by Protestant energy. As a result, they are not that aware of the important part the U.S. hierarchy as a whole has played in the collapse of the country. To their credit, more credit than is due to most everyday Catholics, they do recognize the spiritual component of all that is happening.

Without realizing it, Clark was moving on a Catholic principle when he decided to commit to all this. That principle is known as "subsidiarity," and it simply means "what individuals can accomplish by their own initiative and efforts should not be taken from them by a higher authority." In short, everything starts small and should be managed and solved locally by those most capable of addressing it and solving it.

They recognize the spiritual component of all that is happening.

In the case of Clark, he started locally with his first convention in April 2021, in Tulsa, Oklahoma — and not planning to do a second one. But then he was pressed into doing another one in Tampa. And from that point on, there was no looking back. He goes regionally and encourages those "boots on the ground" to get involved locally so that the chaos on the national level can be rolled back.

Everything begins locally. Everything is best handled that way. That is a massively Catholic approach. And the fact that a small local effort then assumes regional, national or even international importance does not alter the fact that it begins and ends locally.

Mirroring that is our own Church Militant effort. What we do here was never intended to move beyond the boundaries of the archdiocese of Detroit. But once we got our feet wet and understood that the rot we were encountering in Detroit was the same rot being encountered at a thousand different local dioceses, we couldn't help but expand.

The exact same is true here in this diocese of Richmond, where the weak homosexual-cover-up bishop Barry Knestout is part of the problem among the U.S. hierarchy — even being a close confidant of homopredator Theodore McCarrick. This crowd doesn't really know the local involvement of a thousand dioceses across the country in the advancement of communism in the political arena over the decades.

They've heard bits and pieces about the pope and the Vatican being in on the global stuff, but the details of how America's decline has been precipitated by the failures (and even machinations) of many U.S. bishops are still a mystery to them. The problem, from a spiritual standpoint, is simple: The evil of the hierarchy has stained the Church and, for many, given them a reason to never want to enter Her.

The distinction between the Church, as She is in Herself, and various corrupt bishops and warped laity is not understood by them. It's lost on them because, first, it's never been explained, and, second, it's not in their lived experience. If a given Protestant doesn't like what he hears in one congregation from one pastor, then he just goes to another and never thinks another thing about it. And frankly, why should he? One Protestant preacher or congregation offers no more truth than the next.

Only the Catholic Church possesses the fullness of truth. But that fullness is obscured and marred by the corruption and rot of many of Her leaders.

Everything begins locally. Everything is best handled that way.

Backstage, we were introduced to one of the speakers who, when he found out we were Catholic, said to us, "I met my first real Catholic just last night." He went on to describe that he and a Catholic woman were talking, how she understood the spiritual dimension of all this and then went into great detail about the Faith. He said to us, "I'd never heard any of that before. This is something I could get behind." Everything begins small and locally.

It's worth noting that the principle of subsidiarity was employed masterfully by the communists until they had secured so many local victories that they were able to link them all up into one giant victory. They have corrupted an entire culture, but it didn't begin as a giant effort. It began as little scattered local skirmishes in the various institutions.

That's the same song Church Militant has been singing for years now and is the impetus for our Church Militant Call to Action Convention to be held in little more than a month in Detroit. The details are available by clicking on the provided link. Faithful patriots are decidedly "behind the eight ball" in training, organizing and preparing (about 100 years behind, to be more precise).

The goal of the convention is to prepare and train you in the ways of going on the offensive — just like the commies did. This battle can be won, but it will require massive commitment and dedication. All of us have to be completely committed to driving these communist forces completely out of our land, out of the culture and, most especially, out of the Church. There is not enough room in this nation for both communism and patriotism. One will die, and one will conquer. Yes, it's all come down to this! Fight or die. 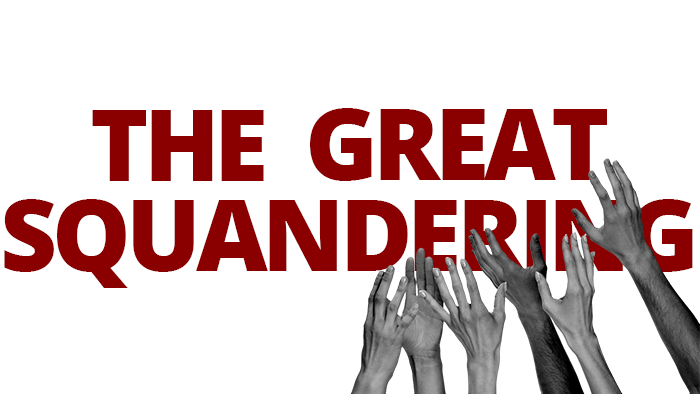 The Great Squandering
We have to do this.