There's something very wrong about all these various dioceses around the country filing for bankruptcy. Last week, Syracuse became the third of eight New York dioceses to head to bankruptcy court with their attorneys. They joined Buffalo and Rochester, and will likely be joined in the next week or two by Albany and Rockville Center — bringing the statewide total in New York to five out of eight and the national total to more than two dozen, meaning about 15% of all dioceses in the United States would have filed for reorganization.

Now, why is this so bad? Why is it worth exploring? Because — like most things with some of these crooked bishops — it's not what it appears to be. Most people think bankruptcy means you've run out of money, you can no longer pay your bills, you don't have enough income to meet your expenses, you're done and going out of business. But not so fast.

There are two types of bankruptcies for businesses (which the dioceses all are). One is liquidation, where there is no reasonable hope the business can continue operating and a federal court seizes all its assets, pays a meager portion of the money owed to the creditors and the business is dissolved. That's what most people think of when they think of bankruptcy. But that is not what the dioceses are doing. There is a second type of bankruptcy for businesses called Chapter 11 reorganization.

In a reorganization, all claims and debts are frozen while a federal court reviews your plans to meet your debts and pay your creditors and so forth. It also conveniently has the effect of temporarily freezing or suspending all civil litigation against you, as well as preventing plaintiff attorneys from gaining access to various records you have.

So when a diocese is being overwhelmed by sex abuse claims — most of which are homopredator clergy cases — filing for Chapter 11 reorganization is a very convenient way to conceal all the secret files they've had for years, decades even, which reveal the diocese knew all about Fr. Homopredator and his buddies and actions for decades.

Filing for Chapter 11 reorganization is a convenient way to conceal all the secret files they've had for years.

The plaintiffs are almost always denied access to those records when Chapter 11 is filed. So a bishop who feels the pressure mounting and knows the entire filthy, sordid history is about to be entirely revealed just picks up the phone and calls the diocesan attorney and pulls the trigger on bankruptcy.

There are disadvantages to filing for Chapter 11, obviously, but on balance, given a complete revelation of how evil the diocese has been for decades versus all the business inconveniences of filing, cover-up bishops will pull the trigger every time.

It's not true in every case, but as a general rule, the dioceses that are filing for bankruptcy are generally the ones with a very sordid history — that, or the chancery staff worked overtime at the paper shredders, which we know to be the case in quite a few dioceces around the country. In fact, shredding documents would appear to be the first option, given that the records no longer exist to be discovered and you get to stay away from a federal judge poring over the details of how you do business.

Of course, it's a crime to shred documents being asked for in a legal proceeding. But then again, so is raping altar boys by the thousands — and we know that didn't stop it. While all this clever legal slicing and dicing is all very interesting and could provide a good series of lectures in law school, why bishops should not enjoy the protections they have (and abuse) is one thing getting overlooked: justice for the victims.

Amidst all the bishop blather and great displays of sorrow and weeping and lamentations, the rending of garments and laying prostrate in the sanctuaries of the nation's churches, one clarion call was heard throughout all the land: "We will be transparent!" Except they're lying. Again. Still.

Take your pick. Not one sitting ordinary in America has resigned since the McCarrick revelations (now two years old with still no report from the Vatican). Donald Wuerl lied incessantly to cover up for his direct predecessor. And he certainly wasn't alone. Not by a long shot.

The other garbage related to all this is something most Catholics don't know. We've mentioned it recently here in The Vortex, but it needs careful consideration. Most dioceses, especially archdioceses, normally have enormous endowments. Los Angeles, for example, has almost three-quarters of a billion dollars. Detroit likewise has hundreds of millions. New York is over the moon with its investment portfolio.

You bishops were part of a system built on lies and cover-up, and you absolutely refuse to face the music on it.

Bishops almost never talk about their endowments because, frankly, if they did and then still asked the faithful every few years for another couple hundred million dollars, it probably wouldn't go over well in the pews.

Dioceses normally have three main items on their balance sheets:

These can be sold and turned into cash, although they don't like to do that. But the one they never want to touch is the endowment — (1) because it's normally a closely guarded, secret source of huge amounts of money; and (2) with closing parishes because of fewer Catholics, the month-to-month bills are now not being met with just the parish tax income.

Every last bit of all this financial catastrophe goes right back to the prevalence of homosexual men in the priesthood and episcopate. Some percentage of them raped thousands of teenage boys. Almost all of them lied about the Faith, causing the laity to fall away.

And now the bill has come due in the form of both massive numbers of lawsuits and cratering income from shrinking parishes. And still the men in miters are willing to screw over whomever they need to in order to hold on to their earthly wealth.

They even jacked up the tax last year on each diocese to keep footing the bill at the bishops' conference (which is little else than a Democrat lobby group to keep pushing their Marxist agenda and getting rich off Uncle Sam), all in the name of "fighting poverty" and "social justice," of course.

But charity, as the saying goes, begins at home. You bishops were part of a system built on lies and cover-up, and you absolutely refuse to face the music on it. You lie, deceive, will not deal honestly — and now faced with what finally appears to be a measure of justice for your thousands of victims, you game the legal system to deny them what they are owed, which is the truth. Every time one of these men sees you parading around with your phony-baloney, do-good causes, you revictimize them.

A huge number of you should be behind bars for what you have caused and still continue to inflict. The victims of you and your kind deserve justice. You wrecked their lives: Some of them you even caused to kill themselves — too many.

The truth in your mouths runs to poison. You do realize, don't you, that the Last Day is called "Judgment Day," and it's called that for a reason? But you don't really believe that stuff, do you? In fact, it's pretty clear you don't believe any of it — or if you do, you sure have a very weird way of showing it.

You should make serious note: You won't get to file for Chapter 11 reorganization once you stop breathing. And for most of you, that's much closer than what you appear to think.

Pray for these men, fellow Catholics. The evil they have given themselves over to is staggering! 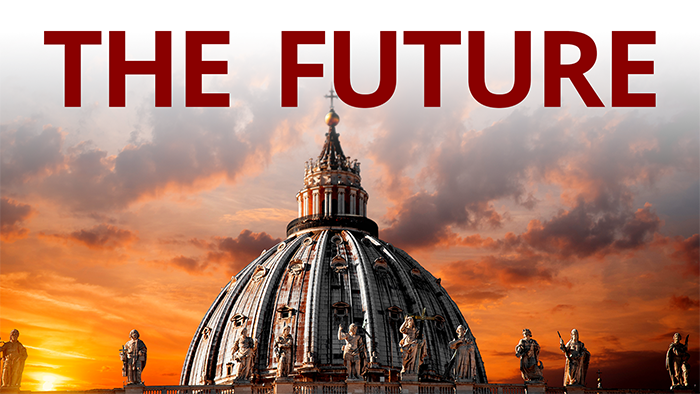 The Future
Riddled with uncertainty.