You can fall off in either direction.

A very holy, happy Christmas to you and all those dear to you. We would like to begin, today, by expressing our deepest gratitude to all of you for your support and encouragement throughout this year. As we know, it has been an exhausting one on almost every front, from politics to the culture in general and most especially, the Church. And specifically regarding the Church, we'd like to appeal to your generosity once again as the year comes to an end, to please donate to our work here at Church Militant, St. Michael's Media. We've provided a donation link for your convenience.

The Church is in a horrible state right now. We all know this. Anyone with a pulse recognizes this. What we are witnessing almost every day, in new and more terrible ways, is the culmination of decades and decades of treachery, and, yes, it stretches back to way before Vatican II. The post-council era has certainly accelerated the crisis, no doubt — but it would be naive to think this all came about sort of out of the blue.

But for those who are dumbstruck at the horror, it can seem that way, certainly. This is why the role Church Militant plays in these days is so vital to support. People can not only fall off the ship on the left; they can also fall off the right side. Schism exists as well as heresy.

The faithful must guard against both, and they must guard against each with great diligence. From our first days, this apostolate has always sought to fight the corruption by exposing it, while also guarding against overreaction to it. There are many ways to leave the Church but only one way to remain in Her.

You can leave through apostasy, heresy or schism. Every single person, throughout our 2,000 years, who has chosen any of those paths has believed, in all sincerity, they were right and the Church was wrong. However sincere they may have been, they were sincerely wrong. Likewise, just like Martin Luther, at the time, none of them thought they were leaving the Church, but that the Church had left them, and the "real Church" consisted in some other form, or place, liturgy, locale, whatever.

Also interesting to remember, every time there was a massive groundswell reaction of either heresy, schism or apostasy, it was always a reaction to the corruption of the hierarchy. The evil of the bishops is what brought about the reaction, but the decision of the laity (and some clerics) sealed the deal.

What Church Militant is committed to is encouraging people, emboldening them to remain faithful to the Church even in the face of these monsters in miters. Martin Luther was convinced the Church was so corrupt that it could no longer be the Church, and a "return to tradition" was the answer. For him, "that tradition" was the first century, the early Church.

Henry VIII died convinced he was a good Catholic, even though he murdered faithful clergy and destroyed hundreds of monasteries. His rationale: The realm needed an heir, needed to be preserved. Of course, that also included adultery and cavorting, conveniently.

Even before Luther, whose revolt succeeded, largely owing to the introduction of the printing press, there were various earlier revolts, led by clergy. They were reacting, or better said, overreacting to the scandals of the Avignon papacy, also known as the Babylonian captivity quickly followed by the Western schism with its three simultaneous claimants to the throne of Peter.

These scandals endured more than a century, and people viewed the Church in terms of Her leaders, priming them to leave when the opportunity arose. A hundred years before Martin Luther there was Jan Hus, for whom the Hussites are named. Hus was a priest calling for reforms long before Luther was ever known. He was burned at the stake in 1415.

There was, of course, the Dutch Catholic theologian Erasmus also strongly agitating for reform against the scandals and corruption. Same with John Wycliffe, yet another Catholic priest who paved the way for the English Reformation as he protested the luxurious lives of the English clergy. Their initial observations were largely correct. Avarice, power, lust, you name it, the hierarchy was a sordid mess.

However, and this is the major point, eventually, their paths led them out of the Church. Some through schism, others through heresy, and others through apostasy. And they were later joined and supported by other Catholic clerics who continued the damage.

Whether through bad theology, a misguided desire for "tradition," or rejection of papal authority (even when exercised by a brute), it was Catholic clergy who paved the way, and Catholic clergy who led the march (out of the Church) of millions and now billions of souls down through the centuries.

These men have their modern-day descendants who must be opposed, in addition to the corrupt bishops who give rise to them. It doesn't matter who the man or archbishop is, they each think their response is the right one. Any response that leads to schism, heresy or apostasy, even if the followers reject those labels, is never the right response.

We here at Church Militant realize that we have to thread the needle each day; that, yes, the path is indeed narrow and sometimes (oftentimes, in fact) hard to navigate. Nevertheless, it must be followed and adhered to. We have no choice. Catholics can fall off the right side of the ship (schism) as well as the left (heresy), or, in the case of apostasy, try to just sink the ship.

We will continue to fight the overarching corruption by exposing it every chance we get. But we will also remain absolutely steadfast in encouraging the faithful to remain and fight and not desert our Mother, no matter how appealing it may be, convinced of a self-righteous, incorrect response to what is manifest injustice.

In these troubled times, very troubled times, this is this apostolate's response to these times, and we will never waver from this approach. Disobedience comes in many forms, and each needs to be confronted and called out.

If you can see fit to support our work, our mission and vision, please click the link and make whatever end-of-year donation you are able to. Thank you in advance for your kindness. 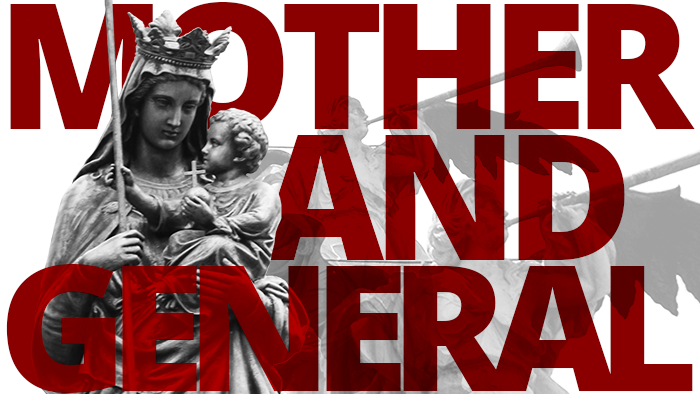 Mother and General
Without her, you would not have known salvation clothed in flesh.