But notice, the first skirmish to have been lost was on the battlefield of philosophy. In truth, once you lose that battle, it's impossible to win any future ones because philosophy sets the parameters of all remaining battles. It defines language, morals, laws — everything. In short, the object of philosophy is truth itself.

A person's philosophy determines how he sees the world and then corresponds actions to that worldview.  As we see so frequently, and with increasing frequency these days, the very concept of truth in and of itself is almost completely gone.

So, we get ridiculous scenes like a Supreme Court nominee who is a woman being unable to provide a definition of "woman."  The determinants of sex, male and female, are simply jettisoned in favor of whatever a person wants them to be and then relabeled as gender. For the record, human beings don't have "genders." We have either the male sex or the female sex, but even that concept has fallen prey to the "there is no such thing as truth" crowd.

Of course, the philosophical war against truth has been centuries in the making. Like all cancers, it started slowly at first, barely perceptible. But once a foothold is established — a base of operations, we might say — then things pick up and advance more and more rapidly.

The philosophical war against truth has been centuries in the making.

The "anti-truthers" are also hypocritical in their declaration that there is no such thing as objective or absolute truth, even as they declare "their truth" in an absolute manner. They say you can't hold to an objective truth because there is no such thing, even as they push the opposite and declare it to be objectively true. That is a philosophical contradiction designed to arrive at a desired outcome, not the truth.

For centuries, the Catholic Church trained its future priests in philosophy and critical thinking, which they would need in order to help guide their flocks to Heaven where the final attainment of such is the apprehension of pure truth. But roughly a century ago, the importance of proper thinking ordered to truth began to be abandoned by the clergy until we have reached a stage where vast swaths of bishops and priests no longer accept various teachings of the Church because they do not accept the philosophical underpinnings, the foundations of those teachings.

Life can be very difficult at times and human beings are a combination of intellect and emotions, but we can never forget that those aspects were severely damaged in the fall from grace. So finding the truth, even understanding that there is a truth, can become a struggle. Reason must dominate and be placed at the service of truth. This is the core, the purpose of philosophy.

Recognizing the dearth of philosophical training and catechesis influencing most Catholics, Church Militant produced multiple programs with this specific goal in mind, to help form critical thinking skills and apply them to the truths of the Faith. This is why so many of our Premium programs focus on philosophy or its application. For example, we have 26 30-minute episodes (that's 13 hours) of Right Reason with Dr. Charles Rice (God rest his soul), one of the more brilliant Catholic minds of the past century. Likewise, another Premium show, Armor of God, also deals directly with how to think critically and ask the right questions. Just as with Right Reason, we have 26 30-minute episodes of this show, for another 13 hours of content.

Of course, at some point, all these sharpened critical-thinking skills based on correct philosophy have to be applied. That's why we produced another program, Houses Built on Sand, of 13 episodes dealing with the philosophical flaws evident in the theology of Protestantism. Yes, it does matter that you are a Catholic and not just a Christian. Along those same lines, and because of the prevailing-yet-poorly-reasoned conclusion among so many baptized that we get to decide what Scripture means, we produced our highly popular three-part program Where Did the Bible Come From?

Ultimately, the goal of philosophy is not just to arrive at some academic point about truth, but to live that truth out in our daily lives so as to merit salvation. For this reason, in our apologetics classes, we focused the last two hours specifically on morality.

The goal of philosophy is not just to arrive at some academic point about truth, but to live that truth out in our daily lives.

No Catholic apostolate has the resources Church Militant has available to you at the click of a button.  The reason for the disastrous state we find ourselves in today, culturally and in the Church, is that Catholic leaders simply stopped teaching the truth. Some, of course, went on to actually teach lies, but that's another topic for another day.

Church Militant is committed to presenting the teachings of the Church and teaching them in clear, decisive, irrefutable and, of course, easily understood fashion. The truths of the Holy Catholic faith must be intellectually accessible to everyone at all times. So, we'd like to ask you to become a Premium member today. It's just $10 a month, much less than you spend on a couple of cups of coffee in a week.

In the face of the colossal failure on the part of Church leaders, the laity must step up and own responsibility for their own spiritual welfare. All this week, the last week of the summer, we are going to be highlighting the treasure trove that is the Premium channel of Church Militant: 100% faithful to the Magisterium, easily understood and, most important, revealing aspects of Church teaching you've likely never heard before.

The spiritual war in which the world is involved right now demands that Catholics know their Faith. Becoming Premium is a fantastic way to begin.  Again, please just click on the link and sign up today for your monthly Premium subscription. 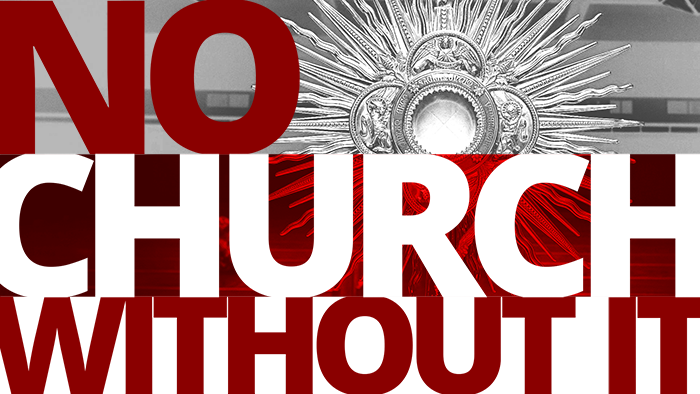 No Church Without It
The Holy Eucharist.