As well as hypocrites.

So for all the virtue signaling the U.S. bishops are doing on the question of racism, history — as well as the present — shows they do next to nothing to back up their preening and pontificating.

The U.S. bishops' concern for the lives and welfare of black Americans would appear to be truly heartfelt, an outpouring in fact. But it's not true, as their actions prove. Although they don't seem to realize it, a bishop's primary role is to teach the Faith; part of that role, of course, is leading people to convert to the Faith. It's called "evangelization," and every archdiocese in the country has established a chic "office of evangelization."

Here in Detroit, in fact, it's even possible to receive a diploma in evangelization from Sacred Heart Seminary, so much does the archdiocese value it. So as we talk about evangelization, with conversions following in the wake of such efforts, how are the bishops doing, in particular in the black community? After all, if they truly care about black Americans, wouldn't they first care about their souls?

African Americans comprise roughly 13% of the overall U.S. population. But in the Church, they are only a measly 3% of the faithful. And that number has remained constant for decades. This is especially notable in major urban areas, which also happen to be where most of the nation's larger dioceses or archdioceses are. In those archdioceses, the percentage of African Americans is greater than 13%. Yet the percentage of black Catholics remains stubbornly low, barely registering.

Of course, it started out low. But the point is it hasn't increased, which means the evangelization efforts have failed. But the more pressing question is, "Have they really been tried on any consistent basis, and if not, why not?" It would seem that the black population, with its traditional, deeply rooted spirituality, would be easily approachable for evangelizing. Yet you will search high and low for any consistent theological effort by the bishops to reach out to African Americans and invite them to the fullness of the Faith.

There's an occasional success story here or there, but, by and large, black Americans have never been seen as "worth the effort" by bishops. But moving on from a lack of concern for black souls, we can easily move to the topic of a lack of concern for black bodies and welfare, on the part of bishops. As they churn out their collective lamentations over the fate of black America, what's noteworthy is the provable fact that they have done practically nothing, in terms of spending money, to improve the lives of blacks in the inner city.

So as we talk about evangelization, how are the bishops doing, in particular in the black community?

In Detroit, the financial hypocrisy is glaring, as sources tell Church Militant that Vigneron and his archdiocese even applied for and received millions of dollars in Paycheck Protection Program (PPP) coronavirus government money. Church Militant has confirmed this information with sources close to the actual transaction. Detroit was one of the hardest-hit areas in the country during the Wuhan pandemic, owing to a large percentage of the population being black. Blacks were disproportionately impacted by the disease.

Yet with all the suffering around them, specifically by blacks, the archdiocese of Detroit got in line early to get money — money that ran out early — which undoubtedly would have adversely affected some black-owned, small businesses in Detroit. But more to the point, how can an archbishop and his archdiocese, along with his predecessors, claim to be so down with social justice and fighting racism when they have abandoned the inner city in Detroit — and have for decades?

Detroit has one of the leading poverty rates in the country — extremely fertile ground, therefore, for social justice work. In fact, as recently as 2018, Detroit was the poorest "big city" in the country, with a staggering poverty rate of 33%. Among children, Detroit surges to the lead, with 48% of children living in poverty. So there is no question there is a great need. Likewise, there's no question that the archdiocese has ample resources here to step up and make a significant dent in poverty, especially among children.

One of the traditional hallmarks of Catholic evangelization efforts has been the Catholic school system. But in Detroit, Catholic schooling for the black population is little else than a myth. Faced with brain-numbing poverty and a dismal, failing government school system, it's a virtual lock that if there were the possibility of a quality Catholic education, many inner-city residents would jump at the chance to get their children into such a safe environment.

So why is Abp. Vigneron, who claims to be so concerned about racism, who is sitting on a war-chest of hundreds of millions, not breaking into it to help black residents of Detroit? He could easily dip into that money (which, by the way, the archdiocese of Detroit keeps very secret from the faithful) and build a few schools and educate and even feed some of the poorest families in America — who are also black. But not only is there no resolve to do anything of the sort, the "woke" archbishop is actually shutting down schools that serve black students, and that's in keeping with a long tradition stretching all the way back to the 1967 riots, when the "socially conscious" Catholic archdiocese simply pulled up stakes and left.

It is a universally accepted reality that the Detroit public school system is a cesspool. One out of four don't graduate, and those that do have among the lowest test grades in the country, with an 18% proficiency score on reading and 10% on math. It's in the toilet.

Why is Abp. Vigneron, who claims to be so concerned about racism, who is sitting on a war-chest of hundreds of millions, not breaking into it to help black residents of Detroit?

So why can't the archdiocese step up and help fill the void? They couldn't really perform worse. At the moment, Detroit has approximately 100,000 students in its school system, over 80% of whom are black.

Presently, there are a total of three — count them, just three — Catholic grade schools in Detroit, educating less than 400 black students in total, and just one Catholic high school with about 250 students (most of whom are black). So for all the talk about fighting racism and so forth, the archdiocese and this archbishop have about 650 black students in their care — 650 out of a student population of 100,000! — with no commitment whatsoever to improving the situation, despite sitting on what amounts to a secret stash of hundreds of millions of dollars.

Likewise, the archdiocese has been on a historical tear, shuttering Catholic high schools at a dizzying pace — the most recent being St. Scholastica by Abp. Vigneron in 2010 — leaving only one predominantly black high school remaining: Loyola.

Dozens of high schools closed in the city from the time of the 1967 riots, leaving what amounts to zero-Catholic effort with black students. When it comes to impoverished black students, the archdiocese has simply walked away, despite having vast sums of money to help with the problem. It's all mouth, no money. Turning to parishes, we see more of the same. In his nearly 12 years here, Vigneron has shuttered eight of 28 parishes in Detroit that had predominantly black congregations — about one parish every 15 months.

But Vigneron and Detroit are just a microcosm of the U.S. hierarchy's overall response when looking at care for black Americans, especially blacks in inner-cities where their care is most needed. Yet they continue to issue hypocritical statements decrying racism, while doing nothing in practice, refusing to even consider dipping into their own vast resources, which collectively add up to billions of dollars.

Likewise, you'll search high and low again to find multiple statements regarding the hundreds and hundreds of young black men killed by other young black men in the inner-cities each year. You'll have to keep looking really hard to find all their statements on the 40% of abortions being done on black babies, a reality that has cost roughly 20 million black Americans their lives. Good luck finding their condemnations of that racism.

Many of the bishops are simply race hucksters, politicizing the issue to make themselves appear relevant and noble. They are neither. They score cheap political points whenever they can, keeping in the good graces of the Party of Death, while completely abandoning the black community they pretend to care so much about. 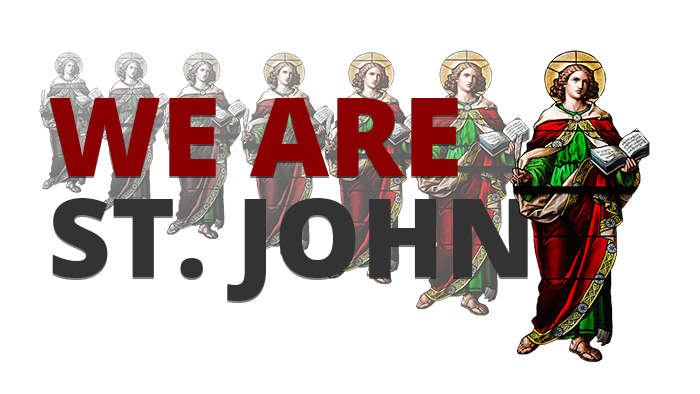 We Are St. John
And the tears are just beginning.