Use code HalfOffOTF to get 50% off all One True Faith DVDs for a limited time! Visit the store today, and check out the terms and conditions and instructions for using a discount code.

In these troubling times — times, it appears, are only going to grow more troubling — various knee-jerk reactions have set in with some good people. Emotionally ill-equipped for the abyss of evil they find themselves staring into, they either deny it or downplay its significance.

They routinely poo-poo the reality of the crisis — attacking the messengers, making up excuses; whatever works best for them. You can refer to this group as the "whistling-past-the-graveyard gang."

But there is another very common knee-jerk-reaction crowd as well. We can call this gang "the silver bullet contingent." They understand the evil and its depth facing them square in the face, but instead of admitting the long-haul battle needed to combat it, they scramble about for a silver bullet — the easy-way-out approach.

So they are more inclined to turn to prophecies and visions and inner locutions.  They follow after anyone who comes along with a quick cure for what ails the world.

Both types, the whistle-past-the-graveyard gang and the silver-bullet contingent, are off base. They may be motivated by good intentions of wanting things to be right, but as the old saying goes — one that exists for a reason — the road to Hell is paved with good intentions.

What needs to be embraced, in all its horror and consequent realities, is this: The world, including the Church, did not arrive at this point suddenly — and it will not pull back from it with denial or a quick cure. Where we are was arrived at over a long period of time: many players, many moving parts but one goal in mind — the destruction of Catholicism.

Both types, the whistle-past-the-graveyard gang and the silver-bullet contingent, are off base.

It's a spiritual war, every last bit of it, with many overlapping parts and players. Unfortunately, a significant portion of the bishops and hierarchy have had a major part in this still-unfolding drama.

Whether they were duped, were willing participants or were too cowardly to provide a strong pushback depends on which bishop you are talking about — but it is clear that almost none of them is up to the task of doing what needs to be done to combat all of this. In fact, it is also clear that many of these men don't actually believe the Faith.

Common sense dictates no other conclusion. Enemies of Christ cannot continue to hide behind the excuse of "prudence" in excusing themselves from the bold response that is now needed.

The faithful, like it or not, are now largely left to their own devices to learn the Faith. In fact, as many now reach that conclusion on their own and begin to explore some basics they were never taught or exposed to, they are shocked at some foundational truths the Church has always taught but they have never heard.

Again, they've never heard them because the men in charge of teaching them either don't believe them or are too chicken to announce them.

This apostolate was founded, going on 17 years ago, on this basic principle: that the average Catholic simply was not taught the authentic Faith, period. Over the years, this has been testified to us hundreds of times, perhaps thousands of times at this point. It was the sole reason we established our work and, as a result, was the reason for the very first production we ever made and continue to enforce: the show The One True Faith.

There are 118 episodes, of about an hour each, touching on practically every topic you can imagine in the Church. It was produced before we realized the true extent of the damage that had been inflicted on Holy Mother Church (both intentionally and unintentionally) but nevertheless is now the operating principle in most Catholics' lives.

As we survey the disaster before us (socially, politically, culturally and most especially theologically) and in keeping with the idea that this is a long-haul battle — not a graveyard or silver-bullet approach — we are happy to put before you the complete collection of The One True Faith episodes.

It's available for you in our store and is our Church Militant–featured, Christmas special this year, complete with a limited 50% discount with all the other Black Friday–weekend consumer sales going on. Over a hundred hours of straight-up, plain-talk authentic Catholicism — not for the fainthearted.

Huge numbers of Catholics have been duped by easy-to-hear fables and lies, like:

In short, owing to wicked and cowardly leaders, the vast majority of Catholics (who still believe in God, that is) are functioning as Protestants, and bad Protestants at that. The world goes the direction the Church goes, because only the Catholic Church — because of Who founded it — has the ability to defeat evil.

And only the most obtuse person would look around the world these days and say it is not awash in evil. So the question is, Why/how did all this happen?

Easy answer: Because the solution to it has been cast aside. Catholicism has been marginalized, and not so much by the world, although that is true, but by the leaders themselves who have made compromises with the world at every turn (especially in the past hundred years).

As we sit here today, there is not a single reason to think that these leaders have the desire or even the ability to turn things around. As Ven. Abp. Fulton Sheen said 50 years ago, it's up to the laity. The bishops cannot give what they do not have. No one can. It is a philosophical impossibility.

Ditch the silver-bullet nonsense and consider a silver-bells approach.

So as we look to the solution, ditch the silver-bullet nonsense and consider our Christmas gift offer a silver-bells approach.

Too much is at stake — meaning eternity, not patriotism and politics and so forth. Those will come into line when the spiritual order is set right and re-established, not before.

It doesn't mean a good person can't work on both at the same time, but it does mean a proper order must be created. At the top must be a solid working knowledge of the Catholic faith and a living out of it, springing from that knowledge and leading to a love of it.

Many of the Church's teachings have been twisted and distorted, wrapped up in such a manner as to empty them of their significance and import. It's high time, beyond time, for Catholics with goodwill (but not knowing what they don't know) to begin to embrace the reality that the world is off course because the Church has been betrayed from within.

So please strongly consider, this Christmas, giving a present (for yourself or others) that has the potential to really make an impact: the gift of the Catholic Faith.

Please click on the link to place your order and use the code HalfOffOTF to get the 50% discount. While you're in the Church Militant store, please look around for any other gifts you might want to buy.

There is enough consumer junk in the world.  Some of it, yes, is nice and fun, but again, it's all about the proper order. Faith first.

Thank you for your patronage, and happy viewing — and to our American audience, a blessed Thanksgiving holiday weekend. 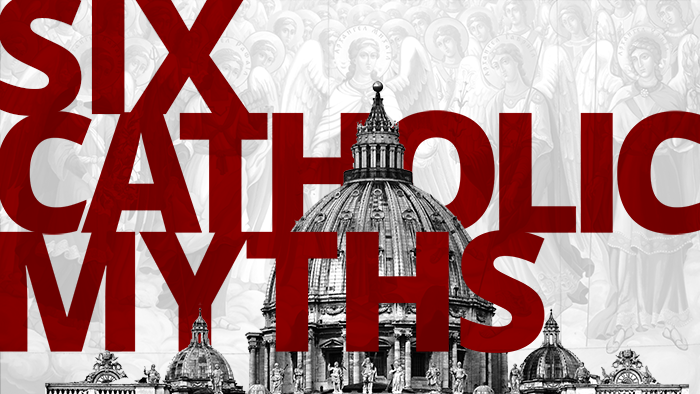 Six Catholic Myths
The role and calling of the Catholic Church.