Stand Firm in the Faith

Do not let yourselves be confused.

A programming note for everyone: Tomorrow evening at 5 p.m. EST (after the funeral and burial at St. Peter's in Rome), Church Militant will be airing a special presentation called Remembering Benedict — a look back on his life and papacy and the many enigmas surrounding the man faithful Catholics called "God's Rottweiler," as a tip of the hat to his adherence to the faith.

Benedict was elected in 2005, and he wrote a last testament in 2006, a custom for those elected to the throne of St. Peter. The last part of that testament bears intense scrutiny for all men of goodwill because of what he says:

Stand firm in the faith! Do not let yourselves be confused! It often seems that science — the natural sciences on the one hand and historical research (especially exegesis of Sacred Scripture) on the other — is able to offer irrefutable results at odds with the Catholic faith. I have experienced the transformations of the natural sciences since long ago and have been able to see how, on the contrary, apparent certainties against the faith have vanished, proving to be not science, but philosophical interpretations only apparently pertaining to science.

Even though he would not die for 16 more years, he was writing those words in view of his death — literally taking a parting shot at the false gods of this world. He plainly understood that these false gods exist for one reason and one reason only: to upend and eradicate the Catholic faith.

In his last official words, he echoes the thoughts of Pope St. Pius X in his landmark encyclical Pascendi Domini Gregis, Latin for "feed my sheep," written almost 100 years earlier.

Both men had great insight into the attacks on Sacred Scripture posing as historical research or biblical exegesis.
One example is the analysis that Jesus didn't know who He was or understand His mission — both points strongly hinted at by Fr. James Martin as well as many other Judases present in the Church.

False gods exist for one reason and one reason only: to upend and eradicate the Catholic faith.

For so-called science to refute Scripture has been a ploy of the Freemason modernists for 300 years now. And yet the truth of Scripture remains undimmed, despite their agitations and warring against it.

Freemasons, modernists and Marxists attack scripture so violently because they know it emerged from the lived practice of those first-century Catholics. It was that part of the Tradition that was written down, but it is not the totality of the Catholic faith.

After all, there was no agreed-upon canon of Scripture (what we would today call the Bible) until Pope Damasus settled the matter in A.D. 405. He then assigned Jerome the task of translating the scriptures from Greek into Latin, a task he fulfilled in the cave at Bethlehem.

It was St. Jerome who said that "ignorance of Scripture is ignorance of Christ," and that became a strategy for the enemies of the Church. If they could undermine the Scriptures, they reasoned, then they could tear down the Church.

They understood the connection between the Church and the Scriptures: that the words of the Bible are the Church's own, breathed onto the parchments of history. If they could sow doubt about them, they could create confusion in the minds of many about the Church Herself.

So for almost 200 years now, that is what they have done and, we might add, not without some major success along the way.

This is why Pope Benedict's final call to us is to "stand firm in the faith! Do not let yourselves be confused!" He goes on to conclude that "Jesus Christ is truly the way, the truth and the life — and the Church, with all its insufficiencies, is truly His body."

And on this point about the body of Christ, remember the sufferings He endured in His body while still on earth. He chose to undergo hunger, cold, deprivation, thirst, heat, pain and, eventually, the tortures of death.

But because He chose those did not make them less real. In fact, because His human body in its natural form was perfect, vivified as it was by His divinity, all that would have been much more agonizing for Him than we mere mortals.

The Church remains divine, despite the human evil playing out in it.

In these troubling times in the Church and, consequently, the world, Benedict points to the never-ending reality that even "with all its insufficiencies, [the Church] is truly His body."

Just as His human body was pinned lifeless to the Cross — flesh ripped from it, all water and blood drained from it — beneath the horror, not a single bone of that body had been broken. The Church remains divine, despite the human evil playing out in it.

The Church remains His body throughout all time until He Himself draws down the curtains on human history; the gates of Hell shall not prevail against it. And as He departed from the direct view of men at His Ascension, He left His own last testament: "I shall be with you all days, even unto the consummation of the world."

This is the ultimate reality of the God that Benedict points us to, helping us to stand firm in the Faith against the attacks of false gods.

Eternal rest grant unto him, O Lord, and let perpetual light shine upon him. My He and the souls of the faithful departed through the mercy of God, rest in peace. Amen.

Joseph Ratzinger, pray for us. 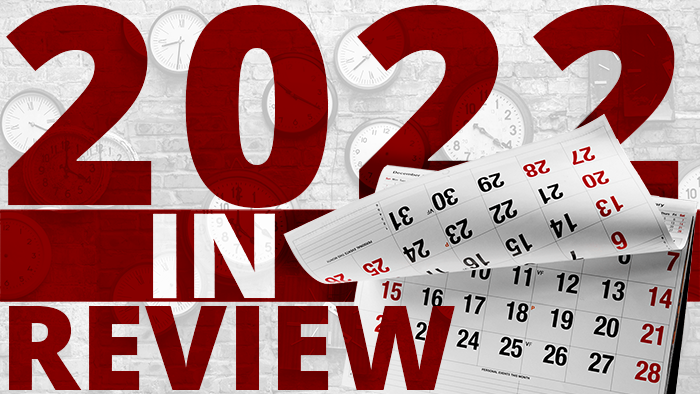 2022 in Review
The major stories of the year.