What if death was the only thing guaranteed?

When the last Congress — controlled by Democrats — passed into law funding for 87,000 new IRS agents, it set off a firestorm of protests and political firebombs. It became a major talking point on the 2022 midterm campaign trail and helped propel the Grand Old Party to take control of the U.S. House.

Correspondingly, it became the very first piece of legislation passed by the GOP-controlled House last week. After his grueling battle to become speaker, Kevin McCarthy gleefully tweeted out: "House Republicans just voted unanimously to repeal the Democrats' army of 87,000 IRS agents. This was our very first act of the new Congress, because government should work for you, not against you."

The bill is dead on arrival in the Democrat-controlled Senate, and even if by some political miracle it passed there, Biden would never sign it. You have to control both the House of Congress and the White House to effectively get anything done — but it plays well on Main Street.

In fact, sitting safely behind the barricade of "we are in the minority in Washington," some Republicans have even gone on record saying, "Forget the 87,000 agents; just abolish the IRS completely." And in the immediate aftermath of securing enough votes to pass the "anti-87,000 new agents" bill, the stalwart Republican Freedom Caucus members introduced a bill to not just dump the new agents and not just the IRS itself — but the entire system of federal income tax.

Additionally, the bill gets rid of the death, gift and payroll taxes, and it would replace the current tax code with a national consumption tax, meaning you only pay federal tax when you actually purchase something. So sales taxes would go up, perhaps dramatically, but you would keep almost every penny you make. There would be virtually no need any longer to distinguish between gross pay and net (take-home) pay. You earned it, you keep it.

Without getting into the particulars of how that would work, what it would mean for the federal budget, the effects on the economy and all that (and "all that" is quite a lot), let's look at the notion of taxing income (the fruits of your labor) as a moral concept.

There has always been a stench of immorality around taxing the fruits of your labor. And given the massively Byzantine tax code the United States has, it also seems unfair, meaning unjust — an offense against the virtue of justice — that the very wealthy, including politicians, are able to skirt around much of this.

There has always been a stench of immorality around taxing the fruits of your labor.

It has, throughout all of human history, been the case that the more money you have, the more options you have to lower or even completely avoid taxes. It may be the case that the only two things in life that are certain are taxes and death. But for the massively wealthy, some can cross taxes off that list.

Why should it be OK for a government to tax the fruits of your labor? After all, you work for it, oftentimes long and hard, sometimes two or three jobs just to keep it together. And when you consider the irresponsible and immoral ways in which politicians write checks from your bank accounts, this doubles the pain for many.

Why, for example, should the district be able to hand over a half-billion a year to Planned Parenthood? Well, under the current system, they can, and they do. Why should other countries get money — again, gained from the fruits of your labor — to secure their borders when our own borders are essentially nonexistent (unless you're trying to legally enter the country)?

There will always be tiers of wealth. Some people are more industrious than others — talent, opportunity, determination, brain power, all that — and no matter what communists say, it will never be the case that society is level. People aren't equal; they aren't the same. To treat people as though they are and develop a governmental ruling system around that false notion is beyond stupid.

"Tax the rich" has become the battle cry of many of the rich in Congress, which should tell you how disingenuous all that is. If Nancy Pelosi wants to pay more in her income taxes based on income made from insider knowledge, there's not a thing stopping her from adding an extra zero to her check to the IRS once a year — as if she actually pays in the first place. It'd be cool to look at her 1040s. Joe Biden once infamously said, "It is patriotic to pay your taxes," as he was reportedly getting huge amounts of money from Hunter's dealings (off the books).

For many reasons, being taxed on the fruits of your labor is simply immoral. It's unevenly applied and simply determined and imposed by people who decided it should be so. It's not to say income tax is not legal; it is. The 16th Amendment made it so. But the legality of something does not ensure its morality. Slavery and abortion are two prime American examples, and federal income and payroll taxes should be added to that category.

In the Left's continuing march to destroy the family, one of the primary tools it uses is economics. Families are often deprived of the ability to make certain decisions simply because of economics, but while that will always be the case (because some things are unavoidable), it should not be the case that the government is able to arbitrarily further constrict those decisions.

Yet it happens every single day. The need for double incomes, meaning both parents have to work and thus delay having children, for example, is just one issue that comes to mind. Without enormous sacrifices or somewhat unique circumstances, one income today usually proves insufficient. When you add together all taxes (income, payroll, gas, sales, real estate, utility and so forth), the average family today loses nearly half its income.

While some taxation is obviously required, is it really half of everything a family brings home? Is shifting taxes to a family's choice of what and when to buy something, presuming an increased sales tax, really some horrible idea? It would greatly increase the impetus for savings and create, at least in some people, a greater financial discipline because one would immediately feel the tax pinch of buying something instead of just having money quietly and regularly drained from you.

On a moral level, is this not a social justice issue? Short of killing children in the womb, is not taking a large portion of the fruits of someone's labor a deeply moral issue? It's certainly more important than the phony narrative of man-made climate change, which is now used as a ruse to take even more money from families and workers.

Is this not a social justice issue?

One of the reasons taxes are so high now is partly due to a cyclical reality. The aim of the Marxists in the U.S. government has always been to break down the family because it makes more people dependent on them (the government). It's part of a larger power grab by politicians: They discourage families by unjust taxation, which leads to fewer families and the human needs supplied by those families. Then the government steps in and "provides" those needs, which, of course, means the need for increased spending, prompting higher taxes.

The federal tax system is a means to transform society from one where the basic building block is the family to one where the government is. It may not have started that way when Abraham Lincoln imposed the first income tax to fund the Civil War — which was repealed, by the way, a few years after the war — but it has certainly transformed into that now.

Worldwide communism, with its anti-family, anti-God foundation, wasn't a thing in the world in the 1860s; it was just then being formulated by Karl Marx. But it certainly is now, and draining wealth from the average citizen and redirecting it into the hands of a powerful few, who are becoming more powerful, is a key component of that plan. House Republicans will likely pass the "abolish the IRS and federal tax" act, knowing it has no chance of passing the Democrat-controlled Senate. So is this just political theater and yet another fundraising tool like opposition to Obamacare was, or is there some actual principle being stood on here?

But here's a thought and where some true colors may be revealed: There will come a time when the annual federal budget will have to be passed, and when that time arrives, the shoe will be on the other foot. The GOP-led House must pass the budget or everything stops. We're not talking about increasing the federal debt ceiling; we're talking about legislation that actually funds the government. It will be interesting to see how House Republicans behave.

The middle-class American family is being demolished, and federal taxes are part of all that. Will they force the issue? Will the U.S. bishops, always pounding the drum for Democrats' social justice issues, take a stand on this social justice issue?

As America continues its descent into the abyss, it's clear that some drastic measures must be taken — transformational steps — to roll back what Marxism has been able to achieve even here in the United States. Marxism's goal is world domination, and that includes not just economics but the dignity of man himself. At its core, it is an aggressive spiritual cancer, which must be opposed. Economics is just one of its chosen weapons, one arrow in its quiver. Here would be a chance to slow it down. 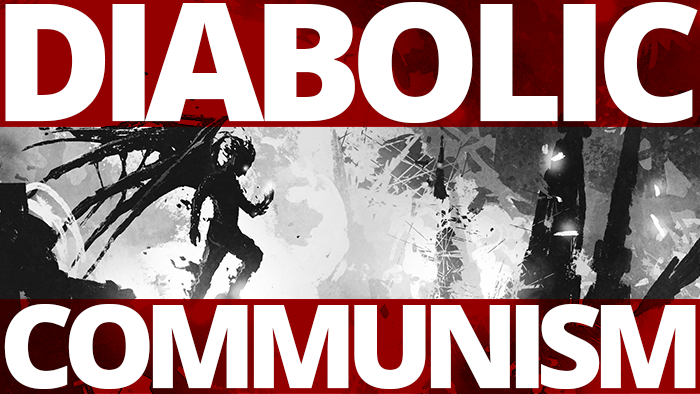 Diabolic Communism
Brought to you by traitors.